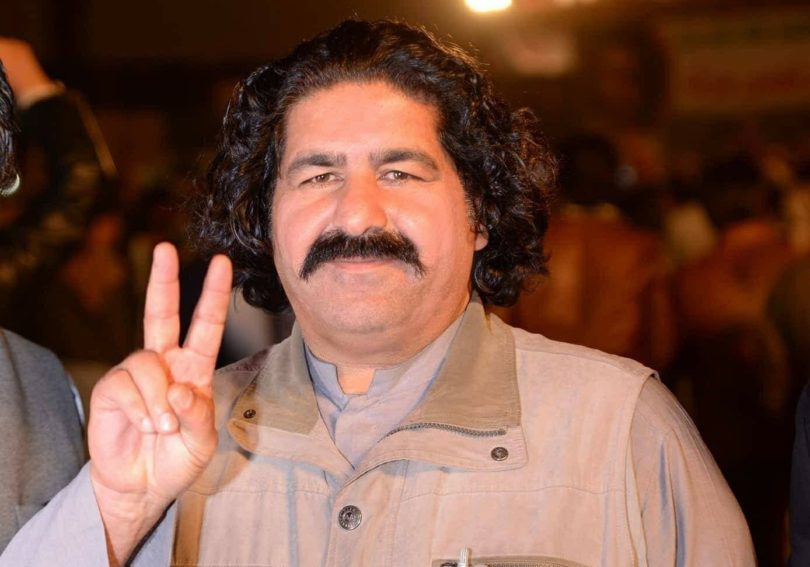 Pushtoon Tahafuz Movement (PTM) once again became the target of harsh brutality; at least 8 people were killed and dozens injured in a militant attack by the so-called “Good Taliban” on PTM leader Ali Wazir at South Waziristan agency’s headquarters of Wana on Sunday 3rd June.

The attack came in light of growing prominence and political influence of Ali Wazir and PTM in the whole country, especially in Waziristan. Also, patronizing of non-state actors by State has come to surface. PTM leaders especially Manzoor Pashteen are demanding that State should stop patronizing Taliban’s and other non-state actors. After successful public meeting at Karachi, State has unleashed its worst kind of terror to silence voices. In Waziristan, Taliban were again installed by the local administration and they were given full security from State, said Manzoor Pashteen in a facebook live stream video. Due to the so-called sensitive situation of FATA, locals are not allowed to carry weapons. However, these elements roam in Army vehicles and terrorize local people. In this situation, Mir Ali area of North Waziristan; a sit-in by people is already underway. PTM has also announced its grand public meeting at Razmak, South Waziristan.

Pro-establishment militant leader Ainullah Wazir is such as an example; who is enjoying hospitality of Army and being used to crush PTM. From some days Taliban are trying to terrify local people and victimizing PTM activists in area. Ali Wazir always stood against Taliban and their sponsors hence Ali Wazir has strongly condemned behavior of militant leader. Militants always lean on terror to consolidate their authority and crush movement hence in order to see their position being damaged by Ali Wazir, he was being attacked. Zaki Abbas in Pakistan Today has put this incident as follow; “As a result, the militants retaliated and attacked the Mirzalam Khan Wazir Market and the nearby petrol pump, owned by Ali Wazir. However, before the attack, they went to Ali Wazir’s home, armed with guns, and asked him to leave the area and quit PTM. The PTM leader refused to do so. The attack on the market was foiled by a large number of local masses and relatives of Ali Wazir who assembled there to resist the militants. The militants opened blind fire at the activists, injuring scores”. After the brutal attack of militants and security personnel in wana, the security forces again opened fire on unarmed masses, claimed Manzoor Pashteen on Twitter. PTM leader Mohsin Dawar has also confirmed the incident, saying the militants opened indiscriminate fire at the rally, killing and injuring a number of people. Many critically injured were referred to D I Khan Hospitals which is at least 4 hour drive away from Wana. The number of deaths may rise as several of injured are in critical condition. This act of barbarism has unleashed new wave of protests. After attack thousands people rushed to safeguard Ali Wazir and he was accorded with a heroic welcome by people. In aftermath of attack, in spontaneous action local people went to rally and started protesting against Taliban and their sponsors. People also started burning Taliban offices and throw away their sympatric elements. In order to calm down the people’s revolt, Army imposed curfew in the area. 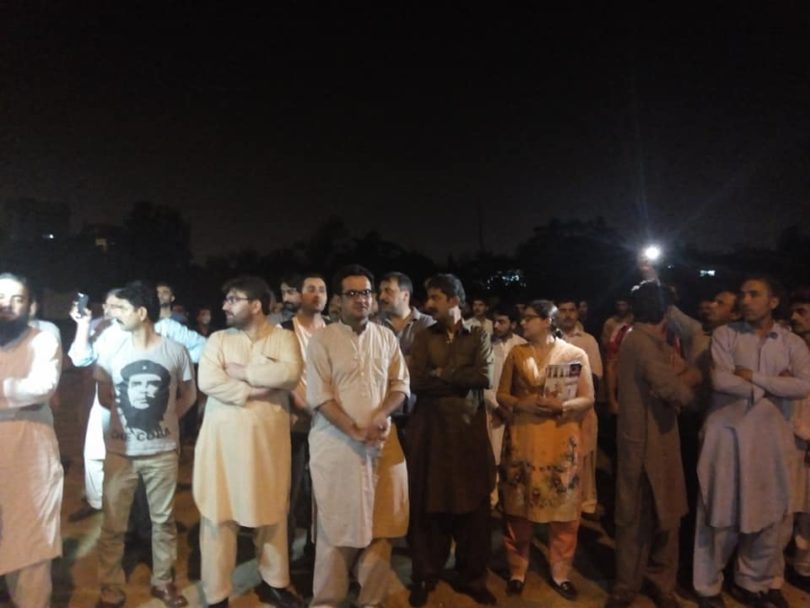 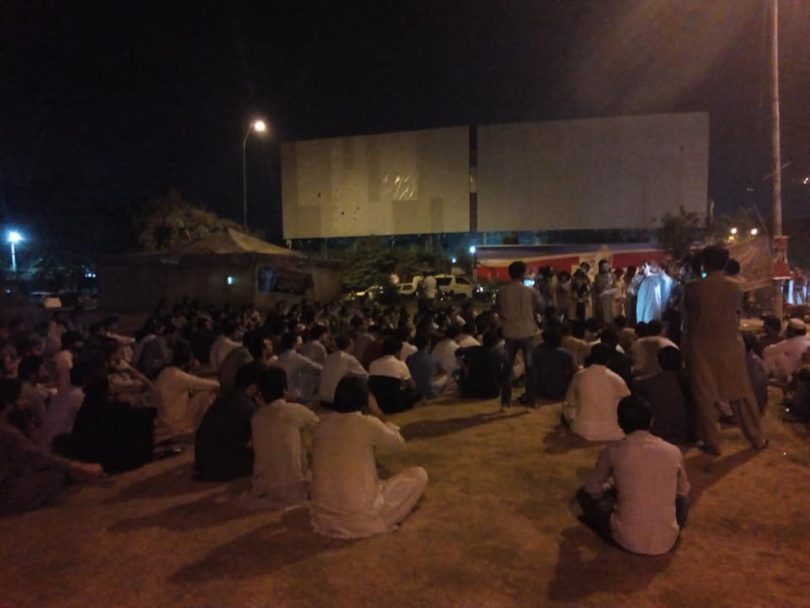 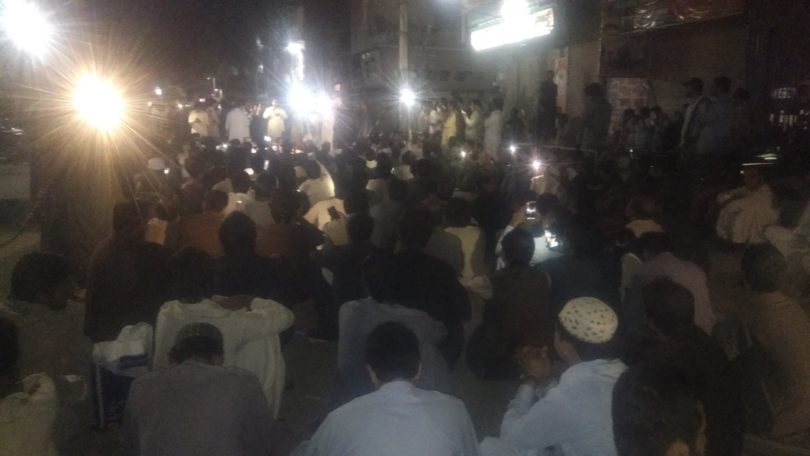 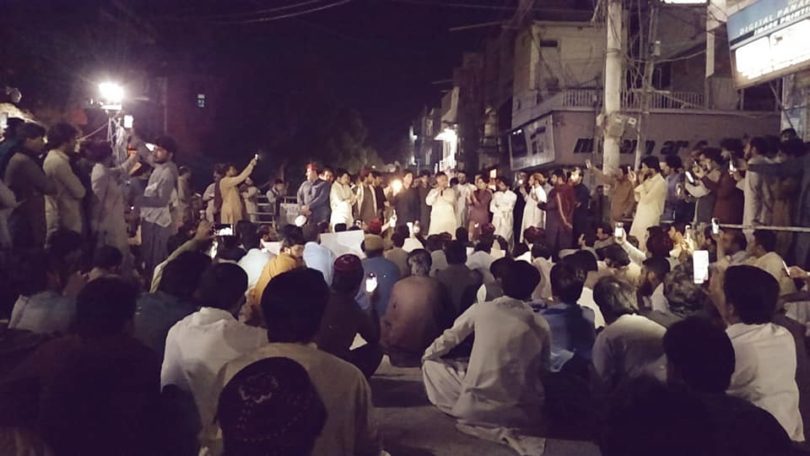 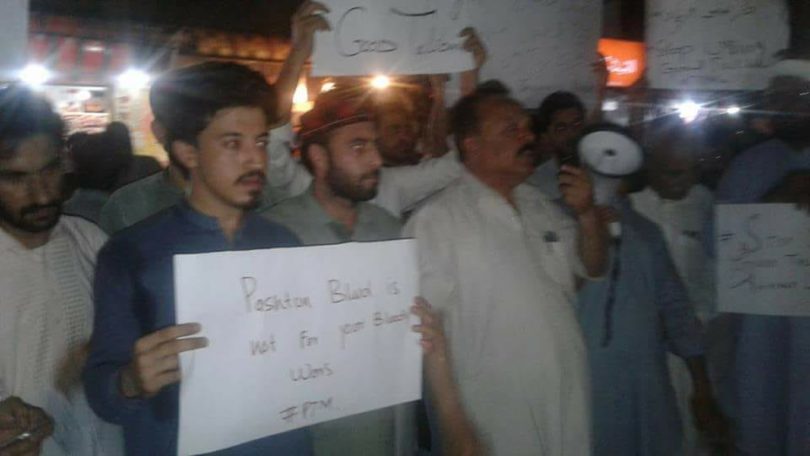 It was not an isolated act against Ali Wazir, he has been a target by these non-state actors due to his consistency in the struggle against terrorism and raising voice for the emancipation of masses. Almost all of the notable men in his family were assesinated and his economic activities were ruined. His petrol pump was demolished, the market was dynamited, apple and peach orchards in Wana were sprayed with poisonous chemicals and tube wells were filled with dirt to force him to surrender to the forces of darkness. He also took part in parliamentary elections from NA-41 Wana in 2008 & 2013. His victory was turned into defeat at gunpoint. But Ali Wazir never surrendered and continued his struggle.

PTM leaders have many times made it clearer that they are demanding just one right – right to live. Instead of resolving their grievances, State is crushing them, they have made clear that they are worst victims of terrorism in world and are seeking justice for wrongs and atrocities that they have endured for so long. Instead of resolving their grievances they are being subject to worst victimization through State institutions overtly and covertly.  From unleashing festering anger at extrajudicial murders to demanding basic human rights for all Pushtuns; PTM has become beacon of hope for oppressed and deprived masses. In a short time it has organized successful public meetings from all over country and marked thousands attendance in these meetings. From offering dialogues to terrorizing its activists and so on. State restored to its colonial legacy and uprooting movement. Taxpayer money is squandered to foment and sustain a propaganda campaign against PTM. Its leaders were labelled as foreign agents and working against Pakistan. Many upshots like Pakistan Tahfuz Movement was launched to divert masses from them. Also many hurdles were created during their campaigns. In Lahore; the venue was cancelled and on morning of 22nd April, dirty water was thrown into Mochi gate ground – venue for PTM meeting. The confusion and mass propaganda was launched to sabotage program. Just one night before this meeting Punjab police arrested Ali Wazir and other PTM activists and there were many raids in different universities hostels of Lahore. All these dirty gimmicks were unable to stop PTM from holding a successful meeting. Same behavior was repeated at Karachi public meeting where planned venue was cancelled by announcing pro-government jalsas at same venue. However PTM later did successful public meeting at alternative venue, Sohrab Goth. This time State tried to stop Pashteen from reaching venue; he was not allowed to board any flight. Even his rebooked tickets were cancelled by airlines. Despite of all these, Pashteen managed to reach venue by travelling more than 30 hours journey by road and it was most successful program of PTM so far.

Pashtuns are being profiled as suspected terrorists across the country, face humiliation at security check posts and innocent civilians face violence during security sweeps and operations. All kinds of comical characters are having a field day directed against PTM. There are also indications that efforts are underway to mobilize sectarian terrorists and other fanatics to counter their peaceful campaign. However, regardless of all hurdles, PTM activists are firm to carryout struggle till their demands are met.