No one seems to be satisfied with the Mashaal murder case verdict. It seems like our colonial era judicial system is unable to resolve the grave social malaise that has set-in. The sickness of our society was laid bare by the reaction of the religious right to this verdict. Pakistan’s oldest and so-called moderate Islamic parties, Jamaat-e-Islami and JUI organised a welcome celebration for the twenty-six men acquitted at the Mardan Motorway Interchange. They were declared as ‘Ghazis’ on Jamaat-e-Islami’s social media. Speaking on the occasion, they not only confessed of being Mashal’s assassins but also vowed to do it ‘ten times’ again. The crowd was rapturous; chanting slogans against the slain left-wing student and glorifying those involved in his heinous assassination.

The fear of violent religiosity omnipresent in society and its penetration in state structures is widespread.However, the social influence of these Islamic fundamentalist forces is more embellished than their actual social or electoral support. These religious and sectarian outlets only can operate with the covert support of the deep state enacting this domestic version of strategic depth.

After Mashal Khan’s gruesome murder it was exposed that a malicious lie was deliberately spread accusing him of blasphemy. University officials fabricated this falsehood along with the vested religious and political interests. Mashal’s courageous activism on issues such as hikes in tuition fees and his ideological beliefs were becoming intolerable for the forces of the status quo.

However, this violent and criminal bigotry is not limited to the extreme religious right. It has also metastasised in the structures of the state. Another youth from FATA, Naqeeb Ullah Mahsud was killed in a fake encounter by a land-grabber and the mass murdering Police Superintendent of Malir, Rao Anwar. Such police “encounter killings” are a norm in Pakistan. In 2016, the police had killed at least 318 suspects in 444 raids and shootouts in Karachi alone. Rao Anwar is notorious for exhorting obscene amounts of money from Pakistan’s most lumpen politician who is financed by an infamous property tycoon, one of the richest men on the planet. Anwar grabbed 18000 acres of land around Malir by bulldozing the hamlets and hearths of Sindh’s poorest of the poor for this real estate tycoon. In some extreme situations, he got those who resisted killed in fake encounters. Now he’s officially a fugitive revelling in some safe heaven. Pakistan’s elite agencies have failed to apprehend him.

But the killing of NaqeebUllahMehsud sparked an unprecedented outrage against this brutal murder and complicity of state officials, amongst the ordinary people particularly, Pashtuns.Students and youth from across the country joined the protests. Naqeeb’s parents came down to Karachi along with their community members and staged a sit-in at Sohrab Goth on the National Highway. Later the Grand Jirga moved to Islamabad. The Jirga put forth several demands, including the removal of the military’s landmines and security establishment check posts. The explosions of these mines have already caused grievous injuries to dozens of children and adults who have lost their legs or arms in these ‘accidents’.

The country’s corporate media has been evading this sit-in. This resistance movement was similar to the one that had erupted throughout Pakistan in the aftermath of the remorseless mutilation and killing of Mashal Khan. These protests had forced the media to cover the incident and pressurised the regimes to pursue Mashal’s case. The religious right and the state were forced to retreat as the protests gathered steam. 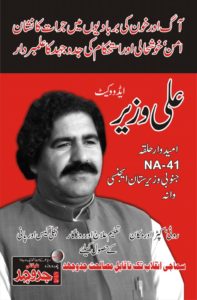 However this time around the protest movement after Naqeeb’s’encounter’ was even more formidable. Not only did the media give only limited coverage but most politicians only visited the Jirga sit-in at Islamabad only for their own face-saving. These protests prove that even in the darkest periods, such cataclysmic events spark the youth into action. However one of the organisers and leading light of this struggle Ali Wazir has become an icon for the youth of the region. Ali is a left-wing political activist from Wana, South Waziristan and had got 8750 votes in the last general elections but lost to the state-supported right-wing PML-N candidate by a margin of just 150 votes.

Youth and ordinary people of Waziristan firmly believe that Ali was defeated due to his socialist ideology. On Monday, February 5, the Jirga organising committee assigned Ali the task to bring fresh people from South Waziristan to reinforce the protests. On the same day, the reactionary forces killed Idrees Wazir, a youth from Wana, who was travelling to Islamabad to join the sit-in. The people in the region’s largest city, Dera Ismail Khan were furious about this barbaric act and in the mass outburst set fire to offices of the so-called “Good Taliban”. The state authorities arrested Ali Wazir for leading those demonstrations and moved him to an undisclosed location. But due to the repeated demands for his release at the Islamabad sit-in and the pressure of protesters encircling state buildings in DI Khan, Ali Wazir was released late Tuesday evening. However, his name is still on the top of the list against whom an FIR is registered. The forces of reaction will try to target him in the coming period as the movement temporarily recedes.

The sit-in participants were not taking the visiting mainstream political leaders seriously. When a local representative of PPP, whose top leader’s name is linked with Rao Anwar, came to address the protesters they responded by throwing shoes and forcing him to flee the venue. The masses are not stupid; they cannot be fooled forever. The real nature of the political and state’s elite is being exposed. On Saturday the Jirga decided to wind up the sit-in after a regime’s minister accepted most of their demands. The implementation of these demands in practice is doubtful. History proves that such sit-ins, as a method of protest, ultimately fizzle out. But this uprising has had an arousing impact on society.  New left leaders such as Ali Wazir have emerged and attained political authority amongst the youth and the oppressed to organise and lead mass struggles in the stormy period ahead.