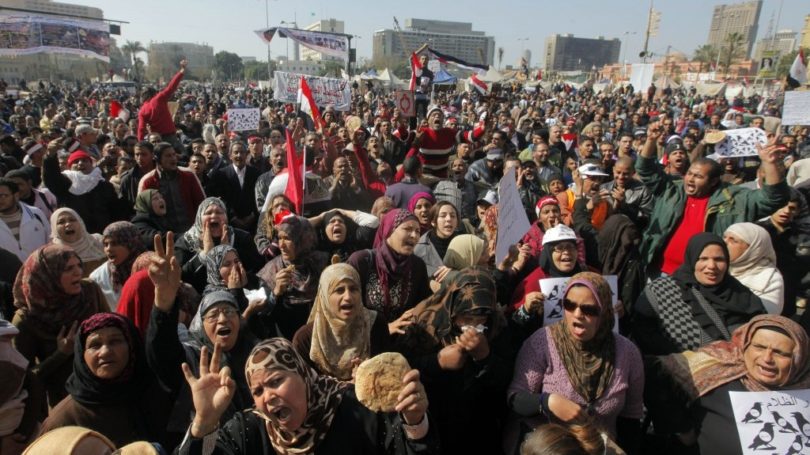 Since the ebbing of the 2011 Arab and North African mass revolt that had swept across the region seven years ago, there are new mass stirrings in several Middle East countries in the last few weeks. Although this ferment is comparatively small, it exhibits a new awakening after the onset of their action, terrorism, mayhem and socioeconomic misery in the aftermath of the upheaval’s decline.

Egypt is one of the most important countries in the Middle East with its historic significance, relatively sizeable proletarian base, strategic location and traditions of the revolutionary eruptions. Egypt was also the epicentre of the 2011 upheaval that overthrew the despotic regimes of Hosni Mubarak and others. This social movement was derailed into a ‘democratic’ discourse by the corporate media and the Islamist and petit bourgeois leadership. The socioeconomic system remained intact, and any respite for ordinary Egyptians remained elusive.

Morsi from the Ikhwanul Muslimeen (Islamic Brotherhood) became the president in an election with no serious leftist contender. Despite his ‘Islamic welfare’ rhetoric, Morsi continued to follow the dictates of the IMF, worsening the plight of the masses. But in a matter of months, the masses arose again into a more massive revolt that overthrew the Morsi regime. The vacuum of the leadership paved the way for a military takeover under General Abdel Fattah el-Sisi.

Now there are signs of a renewed political resistance arising against the Sisi regime. On Wednesday 31 January 2018, eight Egyptian opposition parties in a coalition of Civilian Democratic Movement that includes the Arab Democratic Nasserist Party, Egyptian Communist Party and the Socialist Popular Alliance Party have called for an election boycott, calling the March poll ‘an absurdity bordering on madness.’ All serious candidates in the forthcoming presidential elections have been sidelined, either being arrested or subjected to a campaign of intimidation. This reflects the simmering revolt in the womb of society.

Under the Sisi regime, which includes the Saudi backed Salafists, the people of Egypt have been subjected to severe political and socioeconomic repression. The IMF’s recipe of floatation of the Egyptian Pound in late 2016, as part of a $12 billion loan agreement, nearly halved its exchange value, exacerbating inflation to 35 percent. The regime increasingly attacks workers’ mobilisations, and Egyptian law criminalises strikes. At least 180 workers were arrested and tortured for participating in workplace strikes and protests in 2016 and 2017, mostly over delayed wages. In September 2017, several independent union leaders were arrested prior to anticipated protests.

Independent trade unions are banned. The government-controlled Egyptian Trade Union Federation is the only officially recognised union, with its officials appointed by the regime. The neoliberal assault on the public sector is intensifying. Yet beyond the febrile atmosphere of the ‘war on terror’ and the white heat of repression in the aftermath of the 2013 coup, Sisi’s regime has failed to develop any social base. The old ruling party and the state-run union apparatus are exposed and eroded.

However, despite state brutalities, enforced disappearances of workers’ leaders, endemic torture and extrajudicial killings by the security services, the workers’ movement remains the most effective method for mass resistance. The organised workers have the potential to paralyse crucial sectors of the economy and state apparatus itself. It has the legacy of sustained experience in self-organisation. Despite the regime’s attacks to break this tradition, current levels of strikes action suggest that it has failed to crush the worker’s struggle that can become a harbinger of a new upsurge in the workers’ movement eliciting a new uprising.

However, it’s not only Egypt. In countries like Morocco, Tunisia, Iran and others, there have been initial uprisings in the last weeks that could erupt into wider revolts. There have been localised eruptions in small towns of Tunisia and neighbouring countries. The General Union of Tunisian Workers (UGTT) failed to lead these protests, instead going for a compromise with the government. The trade union movement in Tunisia is historically powerful and has grassroots in society. In Morocco, anger has been rising since last year with militant protests taking place. In Sudan, there has been a protest movement of unprecedented magnitude.

The upsurge in Iran just weeks ago shook the Mullahs’ moneyed aristocracy. Along with the rancorous tyranny of the so-called Islamic Guards, the crude interventionist statements of Trump, Netanyahu and other western leaders isolated the movement and proved to be efficacious for the West’s ‘adversary’ regime in Tehran. The root cause of all these uprisings is the implementation of IMF’s recipes of cuts in public expenditure, support for the private sector, redundancy drives in the state and public sector, abolition of subsidies on fuel, price hikes, mass unemployment, inflation, economic inequality and police brutality.

Once the masses overcome and recover from these shocks from this merciless socioeconomic repression and the internecine conflict between Islamist terror groups turned rogue and their former imperialist masters, they shall erupt into a social explosion on a much higher plane than in 2011. When a social movement takes place on a certain magnitude, it inevitably becomes political. But it takes a variety of forms. At the time of Mubarak and Ben Ali, the protests were aimed at the overthrow of the dictatorships. Today, the discontent is more about socioeconomic issues.

The so-called ‘Arab Spring’ of 2011 was an episodic upheaval in the protracted social process, with its ebbs and flows, reaction and revolutions. The region will remain unstable and drenched in mayhem unless a socio-economic transformation takes place. A revolutionary movement on a class basis is the only force that can eliminate these horrors of terror and misery. This mass upsurge can lead to the removal of reactionary regimes from Arab monarchies to the military and quasi-democratic dictatorships including the bigoted and vicious Zionist regime in Israel. Only such a social revolution can attain liberation of the oppressed nationalities and salvation for the exploited classes. Such a revolutionary change shall arouse revolutionary movements far beyond the Middle East as we saw in the case of the 2011 revolutionary upsurge.