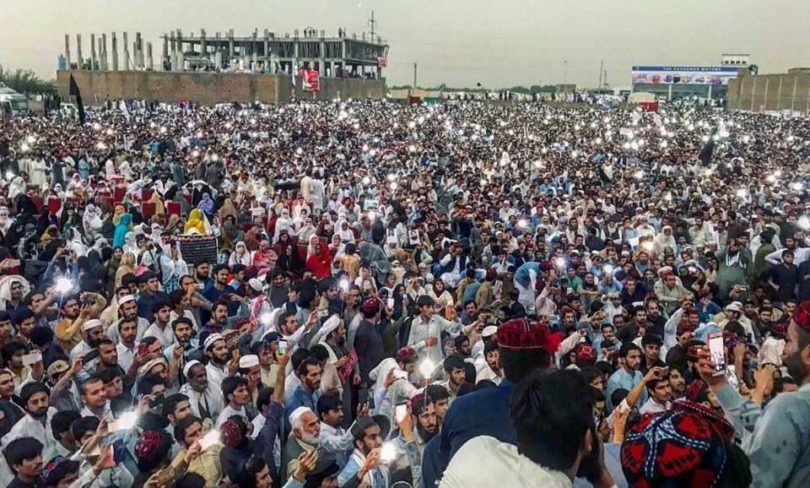 The massive rally of April 8th in Peshawar, on the call of the meteorically rising PTM (Pashtoon Tahafuz Movement) was unprecedented in recent times —and not just for Peshawar and KPK. Corporate media’s virtual blackout of the rally was a disgrace for “free speech”. It clearly demonstrated the collusion of the media barons with the repressive rulership of the country. The leaderships of not only the Islamicist but also the Pashtoon nationalist, secular and liberal mainstream parties opposed the rally and tried to stop the people for attending. Their sabotage failed miserably. This rally was much larger than the rallies of other mainstream parties broadcast live on television channels throughout the day. 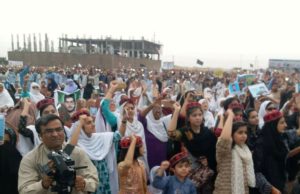 The participation of women at the Peshawar rally was spectacular. This revealed the progressive aspect of a people considered socially the most conservative in this country. Women have suffered most in the conflict that has devastated the region for many decades. The rise of the Taliban and obscurantism had coerced and suffocated their daily lives. Displacement from their homes during the military operations has taken a heavy toll on the plight of women and children in particular.

After the government failed to carryout the assurances that ended the Islamabad protest a renewed resurgence arose under the PTM. These are youth and ordinary Pashtoons mainly from the FATA. It is actually a social explosion of a simmering revulsion for generations against political and socioeconomic subjugation of the region. The movement has, till now, defied all odds, stirring Pakistan’s society engulfed in a relative inertia. By challenging the established order these youth have inspired millions throughout the region.

There are certain moments in history of the social evolution when any major incident or accident can trigger a robust mass upheaval that breaks the barriers and smashes the obstacles. The murder of a young Pakthun Naqeebullah Mehsud in a staged police encounter in Karachi proved to be that cataclysmic event. It has been decades since this mayhem began with the US imperialists, Saudi Monarchy and Zia ul Haq’s fomented dollar Jihad against the Afghan revolution of 1978. This disastrous policy led to George Bush’s war on terror against these sponsored Islamic jihadists that had morphed into Frankenstein monsters after the American military departed from the region in 1992.

The harrowing terrorism of the religious fundamentalists in its aftermath and the military operation of the Pakistani state have pulverised this region. The Pashtoon movement has arisen from the ruins and ashes of this gruesome internecine war between these monstrous plunderers and tyrants both foreign and domestic. PTM’s ascent got a massive support and sympathy not only in Pushtoonkhawa but also throughout Pakistan.

Their basic demands were straight and simple. These included bringing to justice Rao Anwar and other the police officers involved in Naqeebullah’s murder; ending discriminatory treatment of the ordinary people of the tribal areas; ending the humiliations and harassment particularly of the tribal women by the security forces at the check posts, recovery of the missing people picked up covertly, the removal of hazardous landmines from the tribal areas and rebuilding their destroyed dwellings in the so-called collateral damage during the military operation. The PTM also added the demands of a decent socioeconomic existence with the basic provisions of food, health, employment and educational facilities.

The PTM had already held mass rallies and long marches in Quetta, Qila Saifullah, Zhob, Batkhela (Malakand), Landikotal, Khyber agency and several other cities and towns before the Peshawar rally. Their rallies and protest marches have been disciplined and peaceful. In contra distinction to other ‘Dharnas’ and rallies of the right wing and religious parties, the leadership of PTM ensured that there was no blockade of the roads, obstruction of traffic and no inconvenience caused to the ordinary inhabitants of the land during the PTM’s protest demonstrations.

Apart from the accusations of being foreign agents and traitors the smear campaign in the media and intelligentsia on the payroll of the moneyed classes are testaments to the movement’s potential political threat being felt by the forces of the status quo. The custodians of the state and the masters of our morality and livelihood are apprehensive of accepting these genuine and simple demands. At present, the PTM leaders are proclaiming that their struggle is within the constraints of the constitution. But they have remained steadfast with a steeled determination and no signs of weakness in the struggle.

The reluctance of the state to accept their demands reflects its fear of losing control of these areas; the British had imposed through their political agents with no genuine local representation, almost two hundred years ago. The other main reason of their averseness is their anxiety that the acceptance of these demands could lead to more far-reaching demands that could impair the edifices of this socioeconomic system and structures of its rulership. But above all the serious strategists of the bourgeois are fearful of the success of this movement could have a contagious effect throughout the country where repression in socioeconomic and state oppression is practised and dissent also simmers everywhere.

The movement faces grave challenges. The state can choose direct repression with the incarceration or more furious acts against the leadership. That would be a dangerous path to tread for the top brass as the movement has attracted support in Punjab, Sindh, Baluchistan and all other regions of the country apart from its home base in the KPK. There could be the covert operation of deploying Islamicist vigilantes or other proxies to eliminate the leadership. The possibility of actual agent provocateurs or agents of foreign or domestic vested interests could also penetrate the movement and give an alibi for a brutal repression cannot be ruled out. But such desperate acts can lead to some of the most extreme ramifications for the rulership as a whole. Such an act would worry Pakistani elites imperialist bosses—both western and eastern. Disruptions or blocking the forthcoming mass rallies in Lahore, Swat and elsewhere could have worse repercussions for the elite. The possibility of a negotiated settlement cannot be ruled out. But even if some of the major demands were accepted their implementation would be doubtful in the long term. The strategists of the elite would also be working on the policy of isolating and protracting the movement to fizzle out with exhaustion and fatigue. 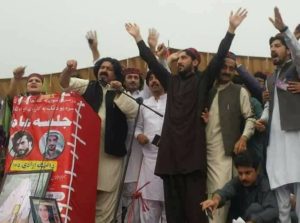 The initial successes of this movement have brought greater challenges for the PTM’s leadership. These are testing times for them. There will be slanders and denunciations. Luring tactics mixed with threats, intimidations and blackmail. They and their families could be economically starved and subjected to a gradual and stealth repression. It is crucial for the leadership to keep up the moral and the momentum of the movement. But it is also necessary to garner wider support from ordinary people and youth of all other nationalities of the country. The PTM’s leadership must ensure that this intense and valiant movement should not be captured by elements linked to vested interests. Nor should they entertain adventurists and pseudo-leftists that could abort the upheaval. Such elements posing as sympathisers can maliciously wreck this uprising.

This is a movement of the oppressed and the deprived. Its genuine sympathisers and supporters on whom this movement can rely and trust those linked to the class struggle for the revolutionary transformation of society. It’s a common struggle of the oppressed against the oppressor classes of all nationalities and their establishment to end this deprivation, misery and bloodshed. Such a united class struggle can guarantee their rights to be achieved and the system of exploitation and tyranny be abolished. This movement initiated by the PTM has shown the potential and capacity of the oppressed masses to rise in revolt and struggle in most arduous of conditions on earth, for the world to see.