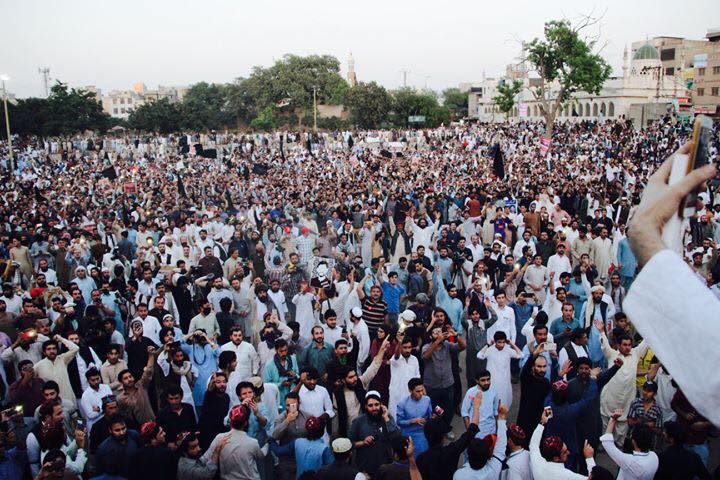 On 22nd April, over 10,000 packed the historic Mochi Darwaza (Cobbler’s Gate) ground in Lahore to listen to the leaders of Pashtun Tahafuz (Protection) Movement (PTM) and Lahore Left Front (LLF), a united front recently formed by the Left groups of Lahore. Despite all efforts of the district management to stop it, the meeting took place. The local management rejected two application of PTM and LLF for the permission to hold a rally on the so-called “security” grounds. 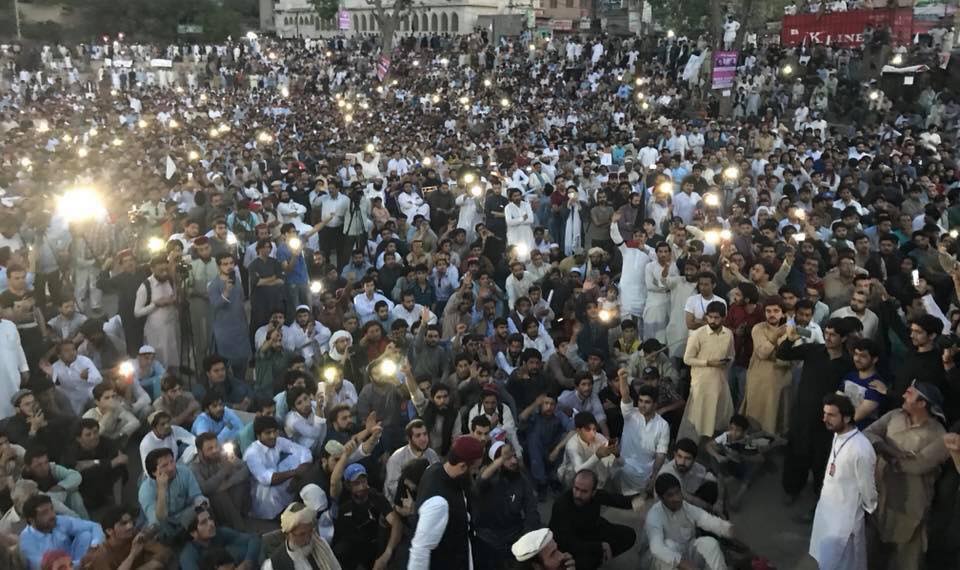 A night before the public meeting, 10 leaders of PTM and others were arrested from a hotel where they were staying. After massive spontaneous demonstrations and mass social media campaign in the various part of the country, they were released in few hours. Those arrested included Ali Wazir, a marxist and the main leader of PTM, Nisar Shah, chairman Jammu Kashmir Awami Workers Party, Fanoos Gujjar, president of Awami Workers Party and Ismat Shah Jahan, president of Women Democratic Front.

In response to this state crack down, Manzoor Pashteen, a twenty-seven years old main leader of PTM, went live on Facebook which was  followed by more than 200,000 within minutes, he declared worldwide protests and announced Lahore public rally and meeting as planned.

Even the daughter of the  deposed Prime Minister, Maryam Nawaz Sharif of PMLN took twitter and condemned the arrests and demanded the immediate release. Bilawal Bhutto, son of Benazir Bhutto, was also among those demanding the release of the arrested leaders. Ironically, it was PMLN government in Punjab whose district government was taking all these actions. We knew it very well that the Punjab bureaucracy was forced by intelligence agencies not to let this public meeting take place in Lahore.

Many of LLF comrades had to spend the night in the underground as the forces were haunting them everywhere. Some of the main left leaders including The Struggle were picked up and threatened that they would be treated as a state criminal if kept supporting and hosting the PTM leaders.

The intelligence agencies made sure that no campaign posters or leaflets were to be distributed among the public. They raided the press where the leaflets were printed and after beating and threatening the press workers they took away 20,000 printed leaflets and burned them. They immidiatly removed already fixed flexes from the roads.

We had made it clear: come what may, we will hold the rally. In the press release of LLF, it has been decleared that “If the religious fanatics are allowed to block the main roads of capital city, Islamabad for weeks and no legal action had been taken against them, why the LLF and PTM is not allowed to hold a peaceful public meeting at a ground where no traffic is blocked? Free assembly is our democratic right and we shall not let anybody to take this away”. No mainstream corporate newspapers or electronic media printed this press release. 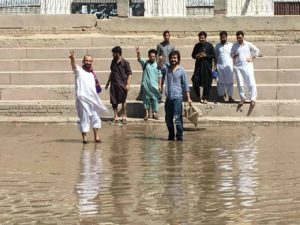 In the background of such intimidations, threats, and arrests, the morning of 22nd April, the day when the public meeting was held we witnessed the dirtiest trick used to spoil the whole event, an underground gutter pipe was diverted to the Mochi Darwaza ground by intelligence agencies and the stinking sewerage water filled the avenue of the public meeting. we had planned to spread some mats and carpets on the ground so that people can sit, but that was not possible in these circumstances. The PTM activists arrived early in the morning at the ground and found this alarming situation but we were determined to hold the rally. The young activists diverted the running water successfully to another gutter pipe after they made a water path in an emergency. Dozens of comrades started using all sort of methods to dry up the ground and by 12 pm they were successful to a large extent. We had to arrange the chairs in the emergency at an exorbitant cost.

The PTM is the fastest growing mass civic rights movement started by Pashtun youth in the last few decades. It has taken over the hearts and minds of Pashtun youth who are victims of state and religious terrorism for over 17 years after 9/11. The PTM started as a small organization in 2014 by Manzoor Pashteen, a local student leader for clearing the mines from tribal areas. Many had been killed by these landmines. After the killing of Naqeeb Ullah Mahsud by police in an fake ‘encounter’ a massive campaign against police action was started in all parts of Federally Administered Tribal Areas (FATA).

Manzoor Pashteen and Ali Wazir are the leaders of this movement. Ali Wazir, a Marxist who had lost 17 members of his family in resistance to the Taliban in Wana, FATA region and all his property destroyed by the fanatics. Still, he refused to bow down and kept his struggle against religious fundamentalists and other forces of oppression with courage and mass support. 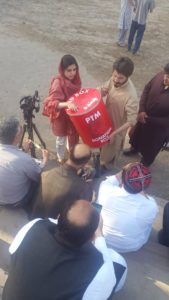 The PTM leaders had addressed thousands during the last two months in various parts of Pakistan. Their demands are very simple and genuine. Bring back the missing persons. Compensate those who have suffered heavy losses due to the destructions of their homes and shops. Compensate the traders whose shops were emptied after they were forced to leave their trade during military operations. If anyone is charged, present him to the court within 24 hours for trial instead of extrajudicial killings and abductions. They also demanded the state to break all links with fanatics. They said that there are no “good or bad” Taliban, they are all the same— terrorists.

These demands were challenging the way military operations were conducted against religious terrorists and on several occasions. With these operations hundreds of thousands had to leave their homes, mass internal migration had made the lives of many thousands of Pashtuns a hell for years.

In this background, the LLF decided in their first meeting, in March, that a Pashtun Solidarity March will be held in Lahore on 22nd April. On 8th April, PTM leader Manzoor Pashteen speaking to thousands in Peshawar announced to hold a public meeting in Lahore. After consultation, LLF decided that PTM would hold the rally and LLF will be hosting it and put every effort to make it a success.

A day before the public meeting, the intelligence agencies promoted a local group to hold a rally against our rally. There were around 300 on motorbikes moving around the whole city without any permission of the district management, in fact, they were facilitated to go on by state actors, declaring us as traitors and threatening us for dire consequences. 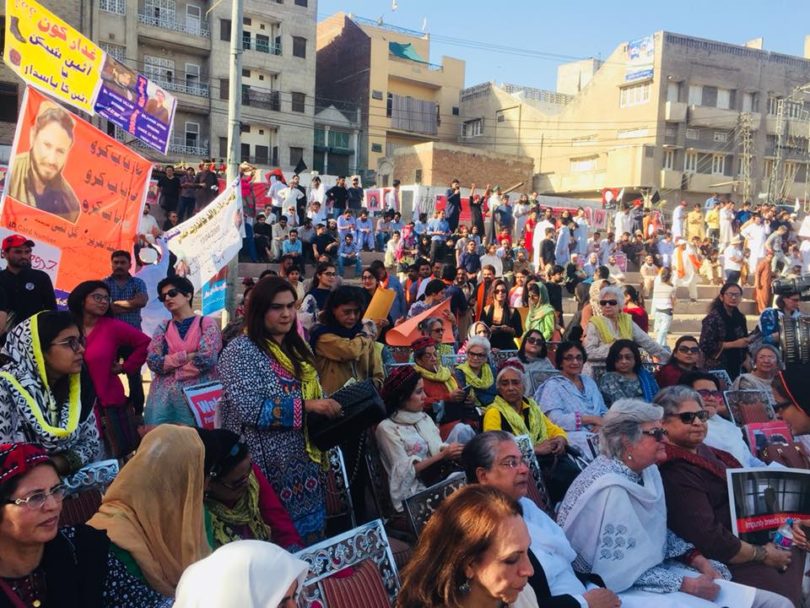 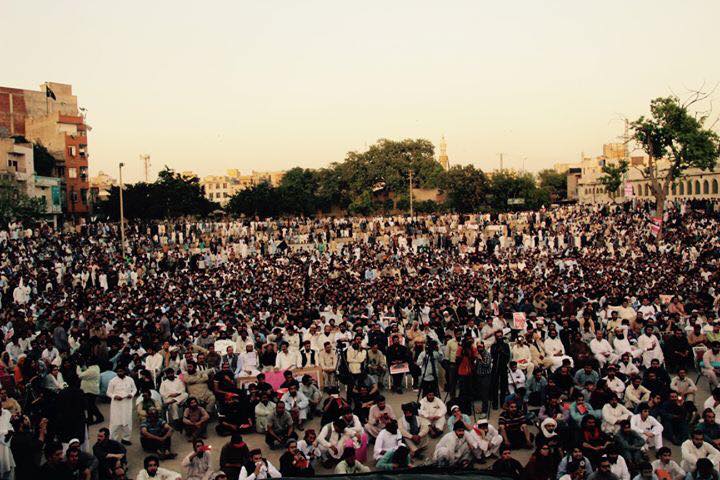 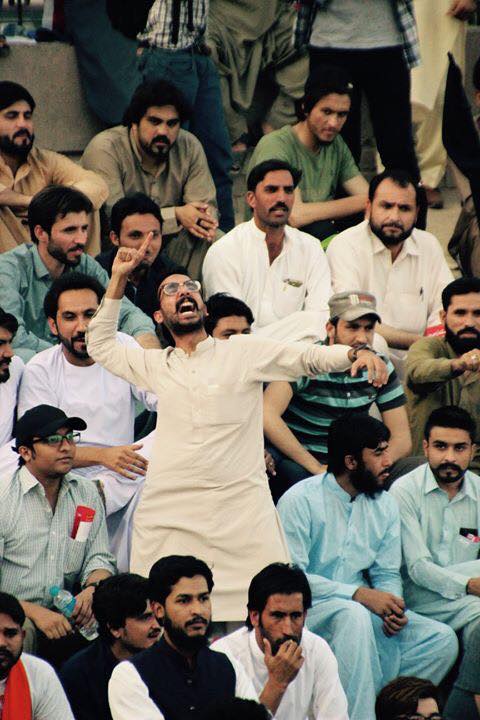 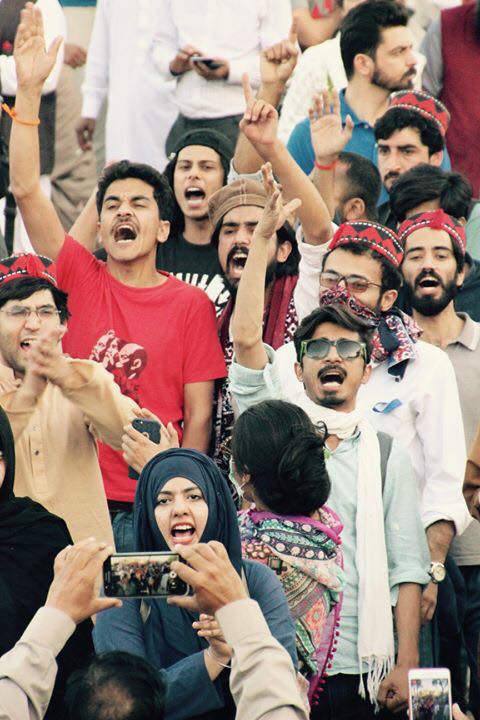 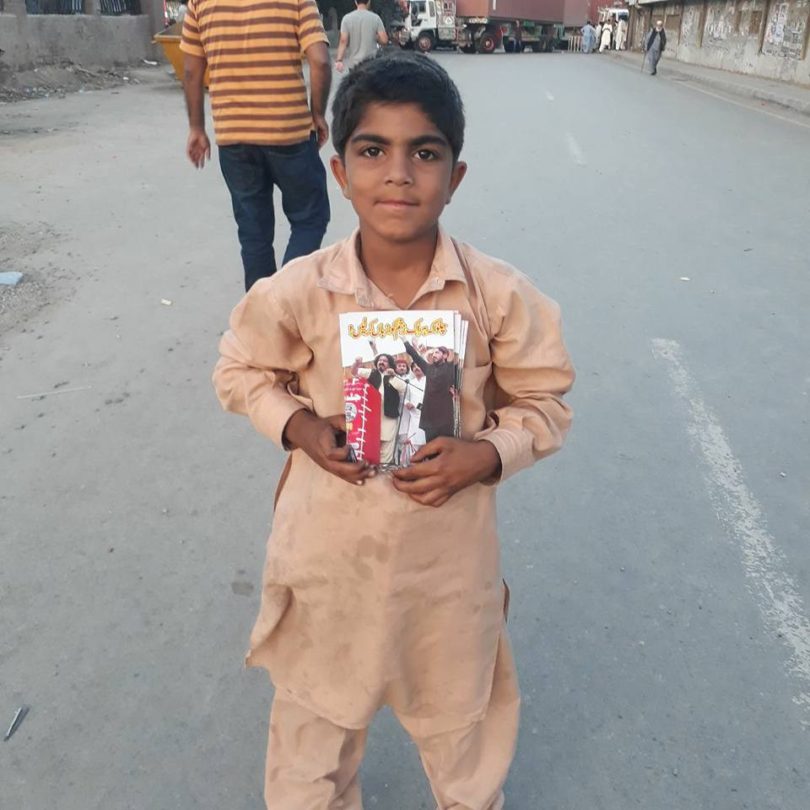 this, under 10, brave child distribute more than 500 pamphlets 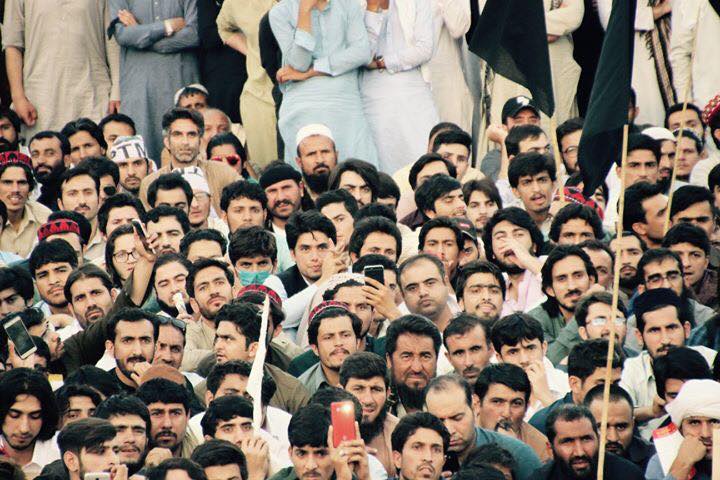 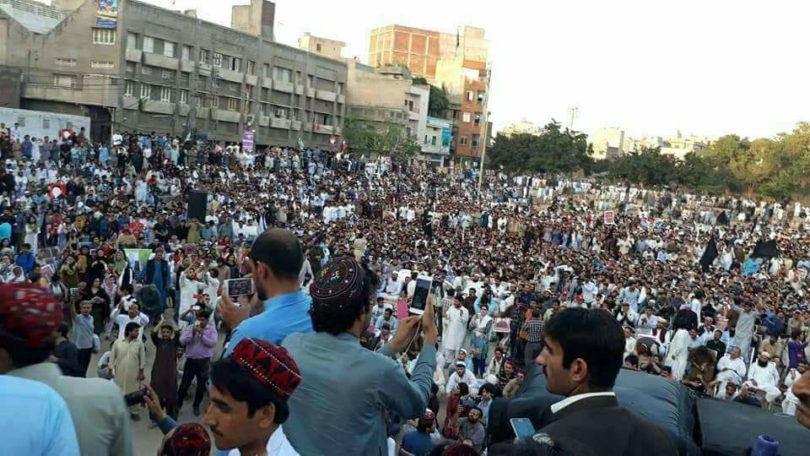 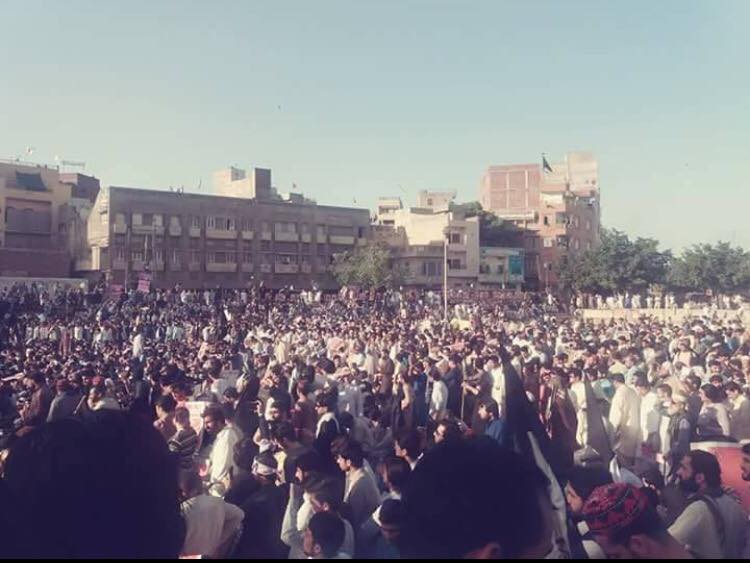 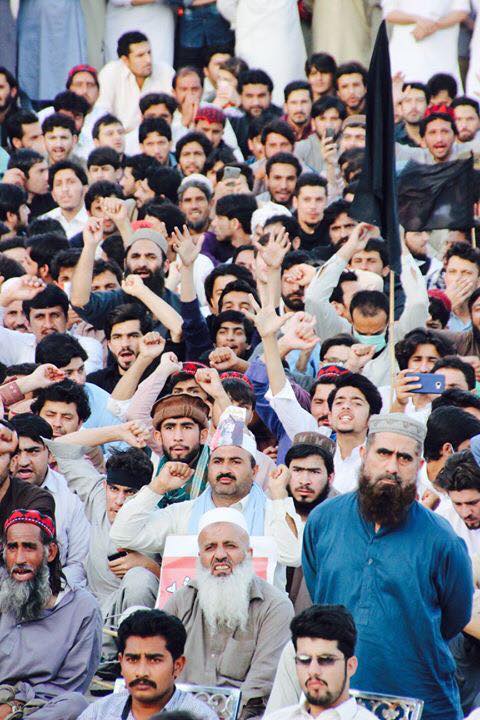 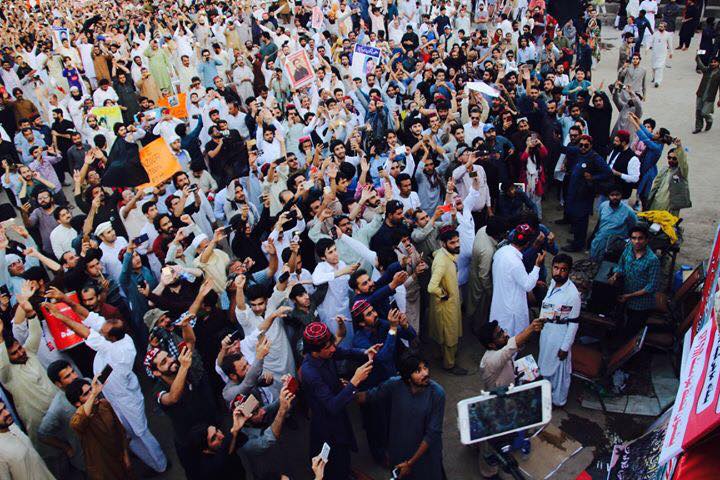 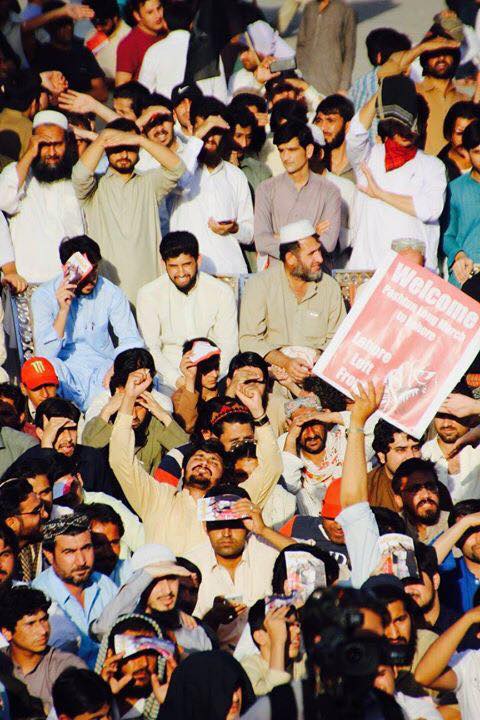 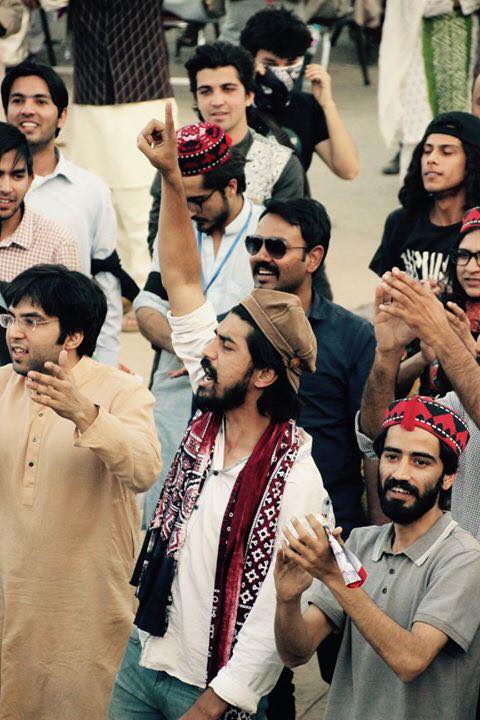 The Entry of the Voiceless 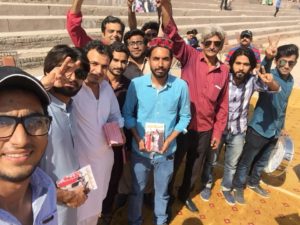 The PTM Mochi Gate, Lahore meeting was a massive success. Thousands of Pashtun workers in Lahore who are subject to racial discriminations and subject to all sort of negative comments poured in the ground. This rally became the voice of the voiceless. They did not need chairs to sit-in, as is the case in most public meetings of the elite political parties. They did not need the food, normally provided by the organizers and a normal practice by the parties of the rich. They did not need any transport from different parts of the city to come to the venue. They came on their own. There were also a large number of non-Pashtun participants. Comrades from Islamabad, Kashmir, Pakhtoonkhwa, Multan, Faislabad and other cities participated with groups of students.

It was a tremendous act of unity and solidarity among the Punjabi and Pashtun workers. The emotions were running high. There were a great response by the audience on the speeches. Freedom was the main slogans… freedom from hunger and state and non-state actors’ violence.

The main civil rights organizations in Lahore had declared the complete support for this event and they were all there. The Women Action Forum, the PTUDC, the Women Collectives, the Progressive Students Collective, the RSF, the Joint Action Committee for Peoples Rights, the Anjuman Mazarin Punjab and many others came in solidarity with Pashtuns.

The daughters of revolutionary poets Habib Jalib, Faiz Ahmad Faiz… Tahira Habib and Salima Hashmi, the sister and daughter of late Asma Jehanghir… Hina Jilani and Munizae Jahangir, all were there with their comrades, friends and colleagues.

All speeches got the tremendous applause. However, it was Ali Wazir  and Manzoor Pashteen who got the maximum applause and standing ovations from the audience.

Manzoor Pashteen, probably the most popular youth leader in the last few decades, declared to hold a rally in Swat on 29th April and in Karachi on 12th May. “Now there is someone here to take care of you, your will not be treated as orphans anymore” he declared. Further more he demanded the Withdrawalof the FIRs registered against students who supported this public meeting, withdrawal of the rustication of Pashtun students, reinstation of Dr. Ammar Ali Jan who had lost his job as a professor at the University of Punjab because of his vociferous support for the PTM’s struggle and their demands.

This was the first public event organised by the LLF and it was a tremendous success. After this rally, the LLF has now become known to some extent to the working class of Lahore, it cannot be ignored that the progressive workers and youth have finally found a platform for their struggle that is genuine, revolutionary and trustworthy. It is able to lend the necessary timely logistic and political support to the most growing mass civil rights campaign of Pakistan and link these fights with greater purpose… a Classless Society… Socialism. 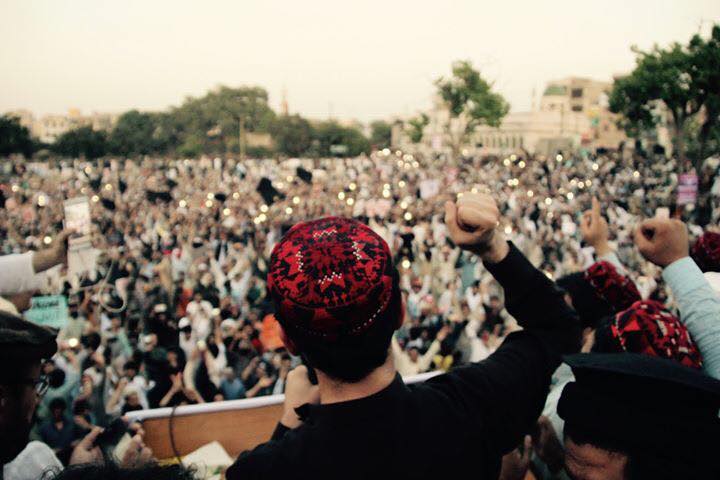 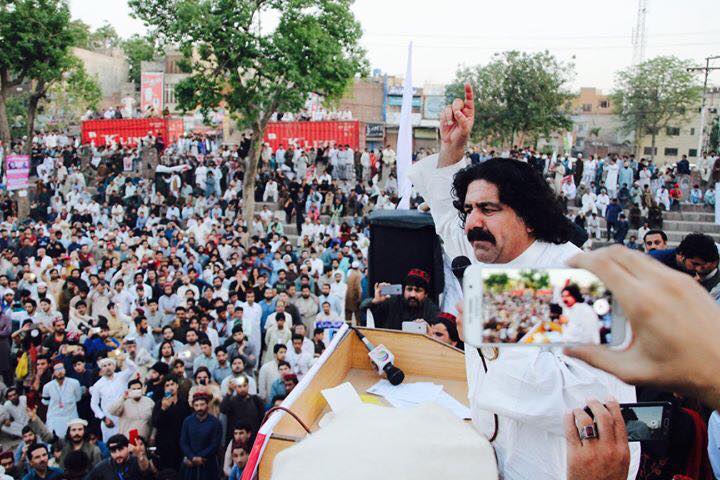 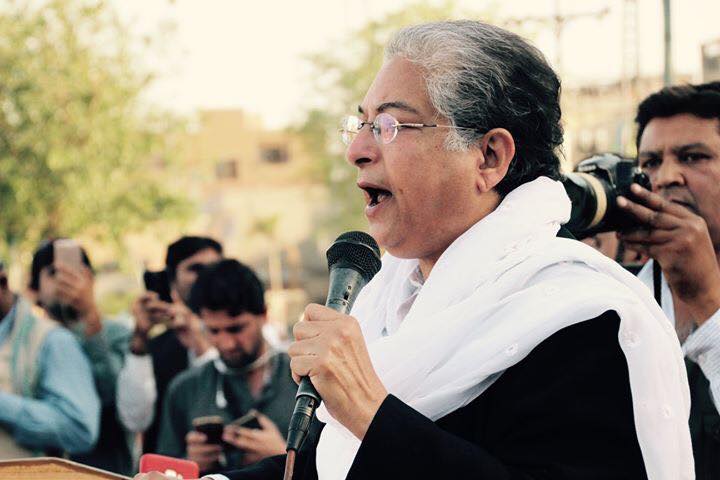 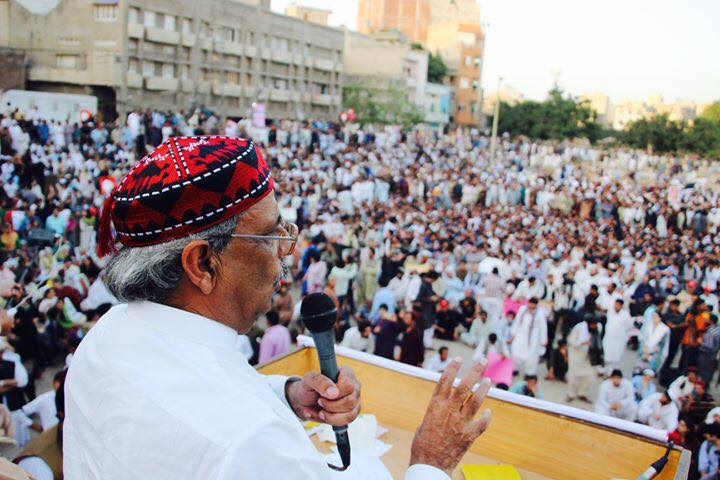 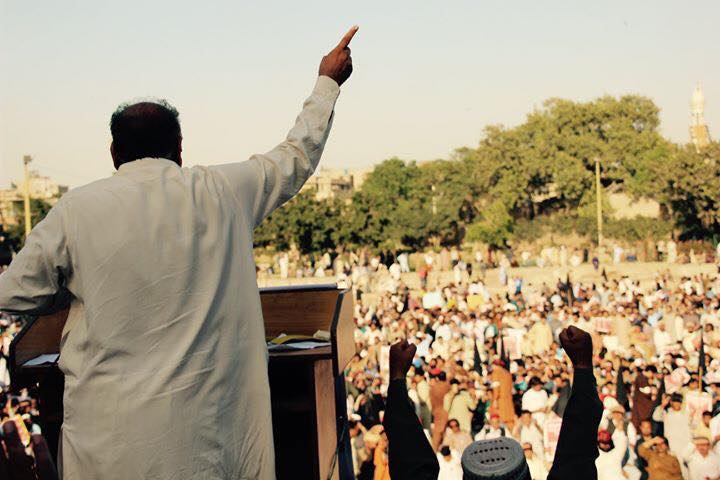