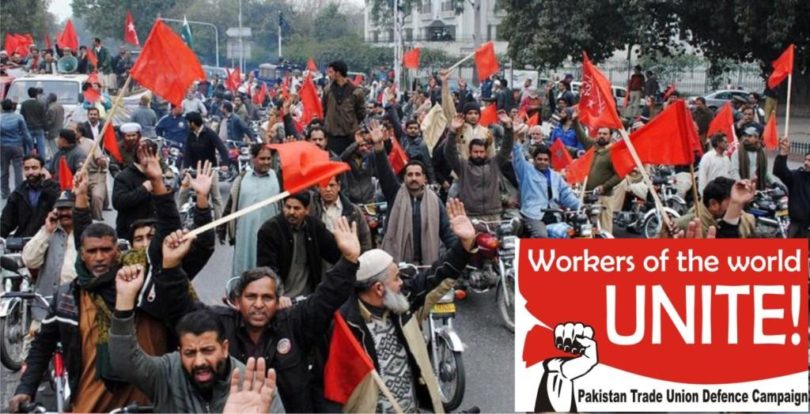 The capitalist class is mercilessly seizing workers’ rights which have been won through centuries struggle. There are continuous attacks on workers movement and even basic right of unionization is brutality crushed. The organic crisis of capitalism is visible in the social and political arena. In pursuit of more and more profits workers are being reduced as the raw material of exploitation. The tendency of attacks on working class has become a norm. All genuine voices for emancipation are brutality silenced down. In this situation Pakistan is no exception; union are struggling to maintain their existence. Although Govt has fixed the minimum wage of Rs 15000 ($130) for unskilled workers, however, implementation of this minimum wage is only on papers. Living standards are declining so as lives of working class. In the name of so-called policy of outsourcing, permanent jobs are vanishing. The vicious policies of privatization and downsizing have become hotcake for ruling class to expand their bellies. Despite all of this situation, the working class has to fight for their emancipation. From different protests, the militant mood of working class can be seen. The ferment of rebellion is present everywhere, below the surface a revolt is brewing. 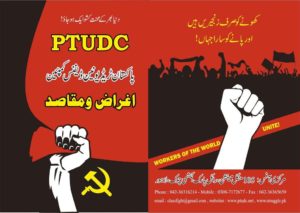 2018 is also the 50th anniversary of Pakistan’s unfinished revolution, 1968-69. Being the torchbearer of socialist revolution Pakistan Trade Union Defence Campaign (PTUDC) is fully gear for the historic May Day 2018. This year PTUDC will be holding more than 50 events throughout the country along with interventions in other major trade union events. To make this possible, month-long meetings have been conducted throughout the country with workers, trade unions and labour organizations. The current economic crisis has exposed the true nature of capitalism. In order to strengthen workers movements; PTUDC has already launched its membership campaign in March 2018, and a special document has been printed and distributed. Many study circles, meetings and gathering have been organized around this document. Also, Joint action committees have been formed throughout the country to consolidate the struggle. The document has got the tremendous response from working class. 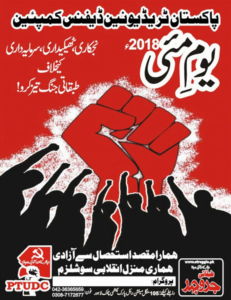 This year a special May Day poster has been printed with the slogan of “Emancipation from Exploitation & Forward to Socialism”, the poster got the highly positive response so far. It will be pasted on walls of industrial areas of all major cities of Pakistan. A campaign is also going around this poster to spread more and more message.

Similarly, the organ of PTUDC “Mazdoornama” special edition for May 2018 has been printed and being circulated. Mazdoornama is the only ray of hope for workers to extend solidarity and to develop their own alternative media in order to disseminate their experiences to fellow workers. 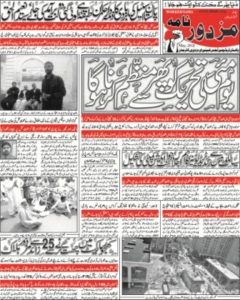 In this situation, PTUDC is forefront in every battle against draconian policies and organizing workers to fight back. At many places, PTUDC will be organizing activities jointly with Public sector institutions’ labour organizations like WAPDA, Railway, Post Offices, Steel Mills, Sanitation, School unions. Also, Sports factories, Hospitals, Food and Beverages industries – like Unilever, Coca-Cola and Nestle, Chemical industries and other sectors will be co-hosting May Day activities with PTUDC.

Main demands of PTUDC for May Day rallies are;

PTUDC appeal to all progressive forces and international working class and their organizations to show solidarity with Pakistan’s working class.