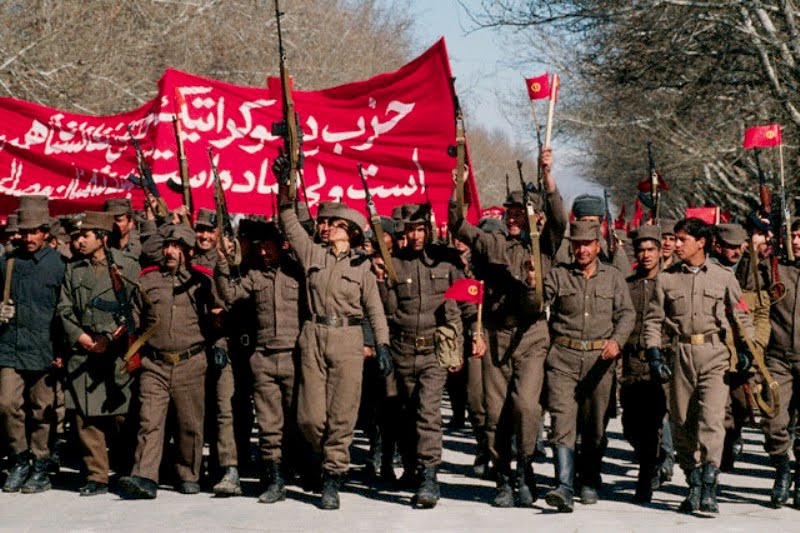 On April 27, 1978, Radio Kabul was broadcasting that the radical Khalq faction of Afghanistan’s Peoples Democratic Party of Afghanistan (PDPA) was leading the overthrow of the Daoud regime and storming the presidential palace. Daoud himself took power five years earlier through a coup in 1973.A few days earlier on 17 April 1978, a prominent member of the PDPA, Mir Akbar Khyber, was murdered. At Khyber’s funeral, large protests broke out in Kabul. In response, the fragile Daoud regime launched a lethal operation to eliminate the PDPA leadership.

Most leaders were arrested and imprisoned in Kabul’s Pul-a-Charkhi prison in the subsequent days. It was a do or die situation for the PDPA. However, Hafeezullah Amin, who was under house arrest, managed to communicate and ordered PDPA military and air force officers to carry out an insurrection that had been partially planned in advance. In the wee hours of April 28, the palace was taken over by the revolutionary command council, headed by Noor Mohammad Tarakai. The next morning it was announced that the revolutionaries were in control of Kabul and large swathes of the country.

There was a barrage of slanderous attacks by corporate media against this revolutionary change. It was dubbed a merely a military coup. However, at a press conference in New York in June 1978, Afghanistan’s Minister of Foreign Affairs Hafeezullah Amin, a politburo member of PDPA, said that“(the) event was not a coup but a revolution by the will of the people”.

Although the Saur Revolution was not a classical socialist revolution from a Marxist point of view, no other event in post-independence South Asia struck such a blow to the region’s feudal drudgery, tribal primitiveness, religious oppression, rotten capitalism and imperialist stranglehold.  Millions of oppressed Afghans immensely benefitted from the radical steps taken by the new revolutionary government under the leadership of Noor Mohammad Tarakai.

All debts, loans, mortgages and revenues that had been imposed on poor peasants by usurers and big landlords for the generation were cancelled forthwith. Another radical measure taken by the new revolutionary government was that marriages of non-adolescent girls usually based on exchange for money and goods were banned. Forced marriages, any acts that either prevented a widow, because of family or tribal kinship, from wilfully re-marrying or forcing them into an unwanted marriage were criminalised. It further fixed the age for engagement and marriage at 16 for women and 18 for men, thus, effectively proscribing child marriage. The government also announced that its first and foremost aim was to eliminate capitalist, feudal and pre-feudal relations from the social and economic order of the country.

Some of the other radical policies pursued by the Saur revolution were: cancellation of peasant’s revenue dues, equitable distribution of water and the establishment of peasant cooperatives. Major healthcare and literacy programs were launched. By 1984, one and half million people had finished literacy courses and in the same year, 20,000 literacy courses were functioning throughout the country, enrolling 377,000 people. The target was to eradicate illiteracy by the year 1986 in urban areas and by 1990 all over Afghanistan.Prior to the revolution, only 5,265 people had finished literacy courses.

What has been deliberately concealed is the fact that the Saur revolution and these radical changes were carried out before the Russian intervention. The Soviet army crossed the Oxus River and entered Afghanistan on December 29, 1979, a year and a half after the revolution had succeeded. Paradoxically, then Afghan President Hafeezullah Amin was assassinated on the eve of the intervention.

At the Geneva talks on Afghanistan in 1988, Gennady Gerasimov, the foreign affairs adviser to Mikhail Gorbachev had confessed of Soviet leadership’s ignorance of the revolutionary takeover.US imperialists had already started their counter-revolutionary ‘Dollar Jihad’ to overthrow Afghanistan’s revolutionary government in the summer of 1978 in connivance with General Zia’s military dictatorship in Pakistan and Saudi funding.

These regional despots were terrified that the gains of the revolution could encourage revolutionary mass uprisings in these countries, threatening capitalist rule and imperialist hegemony. The leadership of the Khalq faction didn’t have any cordial relationship with the Moscow bureaucracy.

Rather, Tarakai was closer to a Marxist position. Marking the first anniversary of the Saur revolution on April 27, 1979 he said, “I congratulate my fellow countrymen, gallant soldiers, my Pakhtun and Baloch brothers and the workers of Asia, Africa, Europe and America on the first anniversary of Saur Revolution…(it) is not limited to the workers and soldiers of Afghanistan. This revolution, which was carried out by armed soldiers under the leadership of Khalq Party, is a great success and a victory for the workers all over the world. The great October Revolution of 1917 shook the whole world. That revolution is a source of guidance and inspiration for our revolution.”

It was the Parcham faction of the PDPA that was in collaboration with Kremlin. With the isolation of the revolution and the reactionary insurgency from across the eastern border, pressure mounted on the new regime. Due to the ideological and factional conflicts within the left government, the crisis worsened. Tarakai was killed in an internal clash and later Amin was eliminated. Babrak Karmal was brought to power through Russian intervention, but the relative stability of the initial months was gone.

The Islamicist insurgency backed by CIA’s covert operation had failed to dislodge the left-wing government. Even after the withdrawal of the Russian forces, the government withstood this reactionary onslaught for four years and only fell in 1992 due to an internal betrayal.

However, the ‘Jihad’ that the imperialists had launched has morphed into a deadly conflagration of terrorism and bloodshed devastating the whole region. This fundamentalist terror has ravaged the Middle East and beyond.

The Saur revolution proved that in, underdeveloped countries even the basic tasks of the bourgeois-democratic revolution could only be accomplished without the overthrow of the rotten bourgeoisie and its state. Despite its shortcomings, the Saur Revolution proved to the peoples of Southern Asia and the world that a revolutionary victory is possible even in the most arduous of conditions.