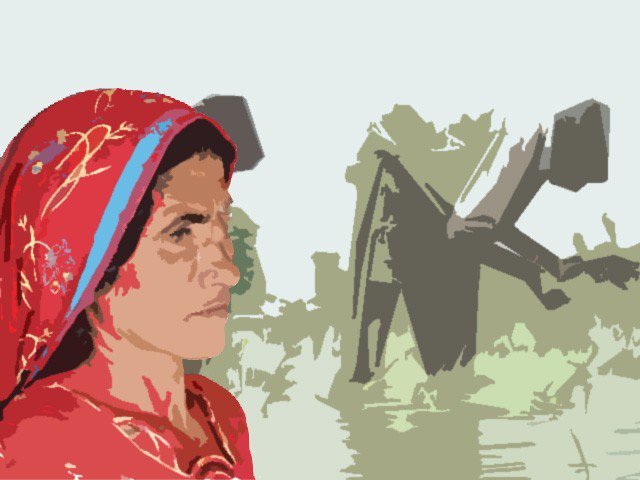 Large swathes of Pakistan are in the stranglehold of caricatured feudalism. These feudal relations are increasingly penetrated by finance capital as it imposes itself on social relations, politics and the economy itself. It has made the lives of millions miserable, deepening and brutalizing class exploitation. Rampant inequality and poverty remain chronic issues as millions can still be considered bonded labour. Such a harrowing situation is revealed by the fact that only five percent of agricultural households in Pakistan own nearly two-thirds of the farmland.

In the Indian subcontinent, the system prevailing before the advent of the British was known as Asiatic Mode of Production, or as Karl Marx put it, “Asiatic despotism.” The land was not privately owned but a common ownership of agricultural land. In this sense it was egalitarian. Feudalism was imposed by British imperialists through the Permanent Settlements Act. “Classical” feudalism, as described within the European context, never existed.

The Permanent Settlement Act was introduced first in Bengal and Bihar by the East India Company’s administrative head and later extended by Governor General, Lord Cornwallis over northern India in a series of regulations dated 1 May 1793. With it the British colonialists bestowed vast tracts of land mainly to the revenue collectors (zemindars) in order to raise land revenue. This grafted native Indians onto the British structure, ensuring their loyalty to British authority.
After partition, this class along with the comprador bourgeoisie became Pakistan’s hybrid ruling class. In their failure to carryout a national democratic revolution as the European bourgeois did in the 18th and 19th centuries Pakistan’s capitalists failed to abolish feudalism. Thus Pakistan was suspended in a hybrid model of feudal and capitalist relations.

Over the last few decades, a new form of feudalism emerged particularly during the periods of military dictatorship. With the help of the state machinery, the poor, small landholders are forced to hand over their land to a particular family for insignificant sums. New feudal owners like Jahangir Tareen of Imran Khan’s Pakistan Tehreek Insaaf now own thousands of acres of land. He has become a typical Pakistani feudalist: a “well-educated” person who, with the help of military dictators, was able to buy sugar mills along with thousands of acres of land. It’s a vulgar combination of feudalism and capitalism.

The landlords’ base of power over local people is taking place at every step. Debt bondage is passed down “generation after generation” and the landlord controls the “distribution of water, fertilizers, tractor permits and agricultural credit.” This, in turn, gives them influence over the “revenue, police and judicial administration” of local government and its officials. In recent times, particularly harsh feudalism has existed in rural Sindh, Baluchistan and some parts of Southern Punjab. It is a form of slavery in 21st century Pakistan.

The feudal system is not confined to the political arena. Land ownership links feudal lords to Pakistan’s various other patronage networks. Landlords, such as Shah Mahmood Qureshi, act as religious patron saints to thousands of peasant as their disciples, who loyally vote for their feudal lords in elections.
The Pakistani army is also deeply entrenched in this hybrid economy. It is an important action particularly in the industry and services sector as well as in the parallel economy. However, its elite layers are also part of the landed aristocracy, amassing vast landed estates. Army officers are bequeathed agricultural lands for serving in the army, and these are often rented out to larger landowners. In Punjab alone, 68000 acres of agriculture land is directly or indirectly occupied by the Military Farms administration. Any struggle for their rights by those tenants has been ferociously crushed by the state and its civilian administration.

Ayub Khan’s land reform failed to deliver after it was introduced in 1959. Similarly, the landed aristocracy in connivance with bureaucracy avoided the execution of Zulfiqar Ali Bhutto’s land reforms in 1972 and 1977. The idea of land reform was simple – take the land from the rich and distribute it amongst the poor free of cost.

However, the broad-based Land Reform Act of 1977 was challenged by Qazalbash Waqf. He sued, arguing that Islamic laws provide broad protection from expropriation if the owners’ property was acquired through legitimate means, and the Supreme Court of Pakistan agreed. A petition against this decision of the Shariat Applets Court has been pending since 2012, but a hearing has yet to be set.

When the military dictator Zia ul Haq came into power in 1977 with his Islamization agenda he fully used religious edicts in the interest of landlords and capitalists. After he took control, it was announced that 1) no law in Pakistan may be repugnant to the Holy Quran and the Sunnah and 2) federal Sharia courts were established to serve the interests of Pakistan’s property owners. Looking over the last seventy years it is reasonable to conclude that state structures reinforce the power of landlords and capitalists and oppose an agrarian revolution.

An Urban Solution to the Poverty of Peasants?

An increasing number of small and marginal farmers migrate to urban areas to escape poverty. In fact, Pakistan is already the most highly urbanized country in South Asia. Clearly increasing migration from the rural areas will create more pressure on the already overstretched infrastructure of urban metropolises.

Additionally, as industrial growth in the country remains stunted, and much of the installed industrial base is already capital-intensive, most migrants will be forced to work in the services sector. Thus majority will probably end up working in the informal or black economy at extremely low wages and atrocious working conditions, reinforcing the cycle of poverty and exclusion.

Let’s look at some of the actual situation of small farmers and peasants. In 2017, Agriculture contributed about 24% of Gross Domestic Product (GDP) of Pakistan and accounted for half of the employed labour force. Important crops are wheat, cotton, rice, sugarcane and maize. The full potential of crop production is still a dream.

While over 60% of the population consists of small farmers, peasants and landless peasants, there is not a single school or a training centre for hands-on-job farmers. [Is this actually true, or did I misunderstand something?] Extension Services that can educate and guide farmers with sound advice remain dormant. The knowledge gap is filled with the sales representatives of supply companies. Of course, their advice is to urge farmers to buy inputs, driving them into greater debt while decreasing the quality of their produce and leading to greater environmental pollution.

Pakistan’s underground water level dropped an average of over 80 feet in the past 20 years due to excessive pumping. This has caused wastage and salinity in the soil, resulting in reducing the land’s fertility. Both the quality and quantity of agricultural production is declining. Industrial agriculture, introduced in late 1960s, uses inorganic materials and genetically modified seeds.

Despite much opposition by peasant and civil society organisations (CSOs) and small farmers, the Senate of Pakistan approved the Seed (Amendment) Act in early 2016. According to the amendment, no unregistered person, whether farmers or institutions, will be allowed to stock, sell or exchange any seeds without official permission. It is a punishable crime with prescribed fines and imprisonment. This is in contrast to the 1976 Seed Act, which was a farmer-friendly. The earlier act made citizens sovereign over their seeds and placed responsibility for seed development registration on the public sector alone. In contrast, the present Seed Act allows multinational corporations to produce basic seeds for its multiplication and certification. Further, the corporations are now in charge of accredited seed testing laboratories. Industrial agriculture interrupts essential natural processes that sustain soil fertility. Instead of supplementing natural ecosystem dynamics, this kind of agriculture substitutes its inputs of energy and chemicals that disrupt and/or displace biological processes. Agricultural productivity depends fundamentally on the sustained FERTILITY of soil systems and on the SUFFICIENCY of productive resources – land, water, labour, and capital. However, there are no mechanisms for helping the small farmers and peasants. They are the real losers at the hands of the corporate seed and fertilizer companies.

The situation of rural labourers is graver than for the peasantry. More than 80% of rural workers do not own their homes; they live under the age-old semi feudal system, which does not grant the right to shelter. Therefore all human settlements that are located on state land held by any civil and non-civil government departments or institutions remain unregistered. Government policies are designed to support landowners and those who own agricultural processing.

One of the most daring examples of peasant resistance has come from the tenants of the Okara Military Farms. They have constantly fought for their land rights over 18 years. However, the repression of these tenants has also continued. Most of the leaders of Anjuman Mazarin Punjab (AMP) have been in jail since 2015. The main AMP leader, Mehar Abdul Sattar, is now locked up at the Pakistani “Guantánamo Bay detention centre,” the High-Security Jail at Sahiwal, which is meant for convicted religious terrorists.

The AMP, a component of Pakistan Kissan Rabita Committee, has been advocating land rights specifically at the Okara Military Farms. The tenants and their ancestors have been working on these lands – which comprise 68,000 acres — for the last 100 years. Successive civilian governments have promised them land rights but have been unable to fulfil these promises due to the pressure of the military.

The AMP was formed in 2000 when General Musharraf’s dictatorship tried to change the status of the tenants into lessee. This was a tactic to remove them from the land over the long term. At that moment the tenants revolted and refused to pay the share of the crop that they were accustomed to pay. They told authorities that they had paid enough and would pay no more. Since that time severe state repression has been unleashed. Eleven tenants have been killed in various incidents and hundreds arrested under anti-terrorist laws. Women are at the forefront of the movement and have also been subjected to arrests and physical beating by the police and rangers. The socialists and other left-wing organisations in Pakistan have been in the forefront of the struggle of the Okara peasants’ movement. Solidarity campaigns have been launched nationally and internationally. The military’s top brass has been vicious and merciless. They are remorseless of their tyrannies against these oppressed peasants but the solidarity campaigns. Support in the courts and raising their demands at every forum has been relentlessly done in all these years. Similarly in South Punjab, Sindh and other regions where the peasantry if in greater majority the socialists must and do participate in their day-to-day struggles. These interventions are made to link these uprisings with the wider urban class struggle and the movement of the oppressed. It’s the task of every Marxists to actively participate in these struggle and link these transitional demands to the historic task of a socioeconomic transformation.
The task of ending feudalism and attaining rights of the poor peasants can be accomplished through a class struggle of the workers and the peasants under the leadership of the proletariat vanguard. Such a struggle by overthrowing this system through a socialist revolution can ensure the basic rights and collective ownership of the land, means of production and a democratic control of the state and society by the toiling masses.