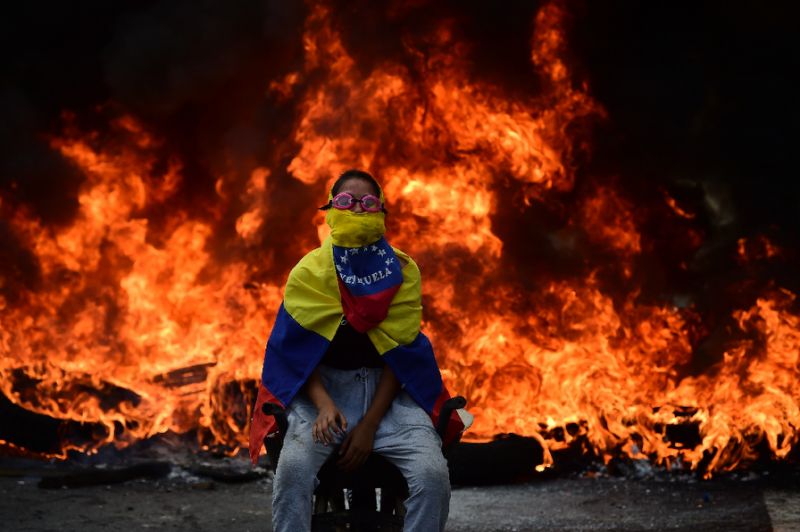 For almost two decades, the corporate media has been launching a vicious propaganda against the Bolivarian movement that began with the victory of Hugo Chavez’s election as President in 1998. In the last few months, the crisis in Latin America’s largest oil producing country have intensified with violence raging on its streets.

Last week, the US imperialists under Trump further tightened the economic sanctions imposed by the previous US administrations. The destabilisation campaigns, sustained economic attacks and covert acts of sabotage by the US and other western imperialists against Venezuela’s left reformist government have intensified. These have plunged the country into a terrible economic and social crisis.

As Venezuela descends deeper into this strife and political turmoil, death toll keeps on rising. The hostile imperialist media contemptuously sneers at President Nicolás Maduro’s speeches and slanders his every action. This while the right-wing parties, which certainly perpetrated recent wave of violence, are portrayed as defenders of democracy. The collapse in oil prices, imperialist sanctions and rampant violence is inflicting more misery upon the population already reeling into an abyss of poverty and agonising deprivation.

Majority of the people who are bearing the brunt of the crisis are also those who most passionately supported Chávez’s Bolivarian project in which the nation’s oil wealth was diverted to social welfare programs in health, education, and housing. Chávez had started to invest the surplus for the future, diversifying the economy and escaping from the trap of oil dependency.

Now this project is collapsing with the fall of oil revenues and sanctions. Today, 95 per cent of Venezuela’s external income comes from oil, as opposed to 67 per cent 20 years ago. Meanwhile, GDP has fallen by 18 per cent as industrial and agricultural production declines rapidly. State monetary reserves have fallen to 40 per cent of their 2012 levels. Almost 90 per cent of the population cannot buy enough food, which explains the average weight loss of eight kilos among vast swathes of the masses. Milk consumption has dropped by half. No data is yet available on the impact of the medicine shortages, but these are in a critical state. The commercial bourgeoisie hoarded goods and raised prices. The industrial and financial barons sent their capital abroad to starve the national economy.

However, behind a façade of governmental unity, another struggle is seething between the ruling PSUV factions; those fighting to continue present policy of compromise and reconciliation or others who want to reconstruct the mass movement that saved the Bolivarian revolutionary movement and Hugo Chavez’s presidency after the US backed attempted coup in 2002-3 was defeated by a mass upsurge.

The reactionary right wing opposition with neo-fascist elements aims not only to get rid of Maduro, but also to destroy Chavismo itself. Most right wing politicians belong to the wealthiest and most powerful families, who controlled the economy until Chávez arrived. Tragically, Maduro has tried to compromise and work with representatives of these right-wing bosses. In 2014, for example, he called in Lorenzo Mendoza, head of the Polar multinational and one of the richest Venezuelan capitalists. Ironically, while Maduro tries to court the bosses, the bourgeoisie right-wing forces have unleashed violent mercenaries to disrupt the country. Ordinary Venezuelans are watching the gains of Chavismo slip away. The gulf between rich and poor is once again widening. In the December 2015 National Assembly elections, the right wing won just under a two-thirds majority. It was mainly because two million Chavista voters abstained — a message to the leadership and a clear expression of pain and despair from those who had to wait for hours for basic goods at rocketing prices.

Chavez founded the United Socialist party of Venezuela (PSUV) in 2006 with socialist and democratic ideals. But after being in power for such a long period in within a capitalist state and society, the PSUV is degenerating into a corrupt authoritarian structure. Despite these setbacks, ordinary Venezuelans keep the traditions of the revolutionary struggle and solidarity alive — even if many of them have fallen momentarily silent.

After the Berlin Wall fell and the Soviet Union collapsed, there was a rise of left in Latin America in the late 1990’s with Chavez’s victory and proclamation of the “Twenty-first Century Socialism.” The revolutionary and left wing forces across the planet acquired a renewed courage from this resurgence of socialism. There was string of left victories in the elections from Bolivia to Ecuador. That tide seems to be ebbing in recent years. However, such movements are destined to resurge again soon.

Reformism, however, left radical it might be, cannot sustain the progress in the socioeconomic conditions of the masses for long. With the worsening capitalist crisis, reformism has miserably failed everywhere. Without its overthrow and the expropriation of the commanding heights of the economy, the stranglehold of market economics cannot be broken. It has to be replaced by a socialist-planned economy to achieve human emancipation. Class struggle has to be fought to the finish. Historically, there have been many regrets by those who missed precious opportunities to complete emergent revolutions. Most met with tragic consequences. The French revolutionary who became President of the National Convention and was guillotined in 1794 when Robespierre fell, Louis de Saint Just had said, “Those who make the revolution halfway only dig their own graves.”