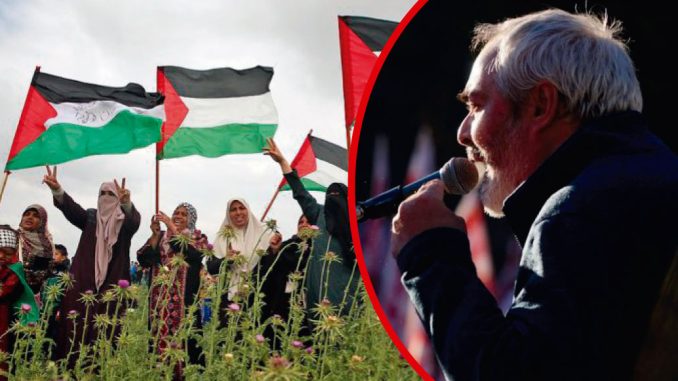 On May 11, in the Jenin Palestinian refugee camp in the West Bank, Israeli armed forces assassinated Palestinian-American journalist Shereen Abu Akleh, a reporter for the Arab television network Al Jazeera. Our comrade Alejandro Bodart, general secretary of the Argentine MST and coordinator of the International Socialist League (ISL), condemned this crime in messages on his Twitter account: “This is Zionism, a constant attack on the Palestinian people,” “Zionists=Nazis.”

May 15 marked the 74th anniversary of the Nakba, when in 1948, the day after the State of Israel was created, the Zionist forces began the ethnic cleansing of the people of Palestine: they expelled 700,000 Arabs from their ancestral territories. They destroyed some 350 villages and committed more than 13,000 murders. On this anniversary, Bodart also tweeted a political message: against “the racist and genocidal State of Israel” and “for a secular and democratic Palestine, from the river to the sea.”

Immediately, Zionism reacted virulently against Bodart and his words: the Argentine Zionist Organization, the DAIA (Delegation of Argentine Israelite Associations), the Simon Wiesenthal Latin America Center and B’nai B’rith Argentina, in addition to dozens of individual Zionists responded with insults and threats. And on May 20, the DAIA sent a letter-document to him and another one to the MST demanding a retraction or ratification of his words and threatening a criminal lawsuit “in case of silence or an unsatisfactory response.”

This attitude of trying to silence any critical voice about Israel’s crimes or in solidarity with the struggle of the Palestinian people stems from the totalitarian character of that State and of all Zionism. The supremacist nature of both is evident both in their ideological conceptions and in reality: they built that state based on ethnic cleansing, which included, in addition to the theft of Palestinian land, the murder of thousands of Palestinians and a brutal repression that continues to this day. They claim to be God’s chosen people and regard their theocratic state as the Jewish homeland. On this basis, they use the fact that the Jewish population was the victim of the reprehensible Nazi genocide to smuggle their own reprehensible genocide against the Palestinian people today.

The map of Palestine from 1948 to today marks the atrocious territorial reduction suffered by Palestinians at the hands of Israel, its repressive apparatus -one of the most powerful in the world- and its violent expansionism. With millions of refugees in neighboring countries, Palestine has been limited to just Gaza and the West Bank, which are actually another two open-air refugee camps: its borders, accesses, routes, water, electricity, supplies and airspace are completely controlled by Israel.

That is why the policy of two States, Israel and Palestine, as good neighbors, is utopian. With Israel there is no possible peace, not even the peace of cemeteries, since not even that peace is respected. Only if that enclave state, and unconditional US ally in that strategic region, is destroyed, will it be possible to rebuild a single, secular, democratic and non-racist Palestine, where all peoples and religions can live together in peace as they did before 1948, now in the context of a federation of socialist republics of the Middle East.

Expand the solidarity with Bodart

Faced with the threats launched by the Zionist entities, the four political parties that make up the Left Front Unity have quickly shown solidarity with our leader; as have all the human rights organizations of the Memory, Truth and Justice Committee; the leader of the Palestinian-Argentinean community Tilda Rabi, as well as organizations and figures of the Self-convention for the Suspension of the Payment and Investigation of the Debt, among other sectors.

Due to the political significance of the case and because Zionism is a counterrevolutionary apparatus with a global reach, we consider it necessary to extend the statements of solidarity to the international level in the face of these threats against Bodart, as part of our permanent political battle in defense of the heroic Palestinian cause.