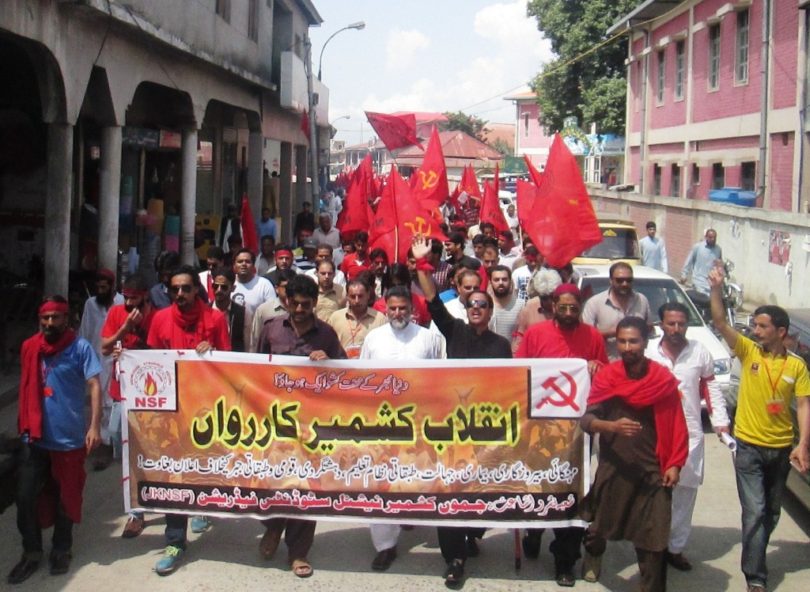 The 20th central ‘Intifada-e-Kashmir Convention’ of Jammu Kashmir National Students Federation (JKNSF) was held on 25, 26 August 2017 at Rawlakot, Kashmir. In an era, when students in general are alienated from students’ politics and students unions are practically banned for decades, this convention is a key milestone in the revolutionary students’ movement in Kashmir and the whole subcontinent. Echo of this convention will be heard on the other side of LOC, where Kashmiri youth are fighting brutal Indian state terrorism and it will help arm the youth with the ideas of revolutionary Socialism and Marxism on both sides of LOC. More than 2000 youth and students attended the convention from Kashmir and whole Pakistan. It was the most successful convention of JKNSF ever both qualitatively and quantitatively. Its success would lead to the rapid growth of the forces of revolutionary Marxism in Kashmir and whole region.

The preparations for the convention had started several weeks ago. Meetings were conducted all over the Pakistan occupied Kashmir. During this process several new organizational units in educational institutions of different towns and cities were formed. Marvelous motorbike rallies were organized in Muzaffarabad and Rawalakot. Camps and stalls were organized, leaflets were distributed and revolutionary literature was sold in large quantities. It was most probably the biggest campaign for any political convention ever held in Kashmir. As the bus caravans from all over Pakistan were moving up the foothills of the Himalayas, all the rocks were painted red with the slogans like ‘One Solution: Socialist Revolution’ and ‘Asia is Red’ along with the signs of hammer and sickle and red flags to welcome the delegates. A short report of preparations for the convention along with the pictures has already been published on our website. 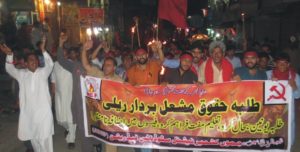 Towards the evening of 25 August, students’ caravans of buses and motorcycles with red flags and banners from all over Kashmir and Pakistan started to gather in Rawalakot. A torch-bearing rally was organized in order to highlight the demands of lifting the ban on students unions and free education for all at all levels. Students from Ali Sojal, Rawalakot, Muzaffarabad, Hajeera, Palandri, Bagh, Mirpur, Kahigala and Thorar areas of Kashmir along with students coming from different parts of Pakistan participated in the rally. Echoes of revolutionary slogans could be heard all over the city. 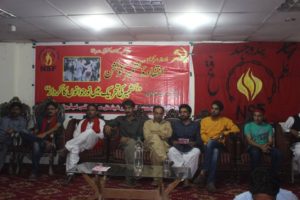 The rally ended at Hill Top Hotel in the center of Rawalakot city, where a pre-convention educational session was organized in the main auditorium. The meeting was presided over by Central President JKNSF Basharat Ali, while Rashid Sheikh, the former Central President JKNSF, was the chief guest. Meeting was addressed by Central Organizer Revolutionary Students Front (RSF) Awais Qarni, Sangeen Bacha from Pashtoon Students Federation, Babrak Khan from JK Peoples Youth Organization, Ahmad Khan from PSF Azad, Shehryar Zouq from PSF south Punjab and Rehana Akhtar, Abid and Altamush Tassaduq from JKNSF. Speaking on the occasion the youth leadership discussed the current scenario and conditions of student politics and highlighted the perspectives and strategy to fight the fee hikes, privatization, unemployment and national and class oppression. 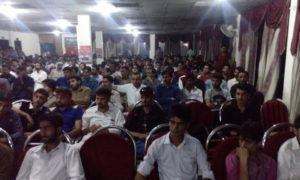 Basharat Ali announced the newly elected central cabinet of JKNSF, in which Abrar Latif was elected as the new Central President. Rashid Baghi was elected Senior Vice President. Other members of central cabinet included Murrawat Rathore as Vice President, Yasir Hanif as Secretary General, Basit Bagi as Deputy Secretary General, Shahid Chaudhry as Joint Secretary, Taimur Saleem as Chief Organizer, Naqash Ameen as Information Secretary, Shafqat as Information & Press Organizer, Altamush Tassaduq as Editor ‘Azam’ (the official central organ of the JKNSF, meaning ‘Determination’), Sohail Ismail as Deputy Editor ‘Azam’, Adil Bashir as Chairman Study Circle, Raja Husnain as Deputy Chairman Study Circle, KaifiatUllah as Chairman Financial Board, Arsalan Shani as Deputy Chairman Financial Board and Asim Jameel as Deputy Chairman Department of Broadcasting. The meeting that started at 5 PM in the evening ended at 2 AM in the morning of 26 August. Youth and students were full of enthusiasm and passion. 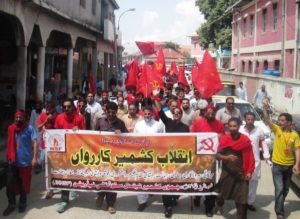 In the morning of 26 August a huge rally was organized against price hike, unemployment, terrorism, class based educational system and national and class oppression. Revolutionary slogans like ‘Down with Capitalism’, ‘Down with State Oppression’ and ‘Inqilab Inqilab Socialist Inqilab’ were being chanted by the participants. The rally, after taking the round of whole city, ended at Sabir Shaheed Stadium Rawalakot, where the stage was set for the convention. 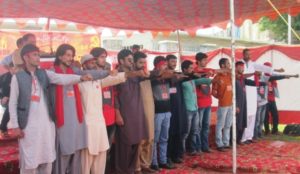 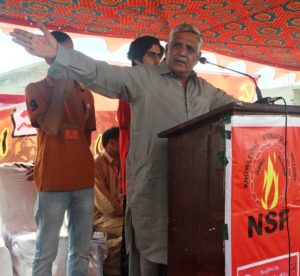 While addressing the convention Dr. Lal Khan said that the working class and youth of Kashmir on both sides of LOC are facing national oppression. The movement of youth in Indian occupied Kashmir has shaken the Indian state from its very foundations. The fifth largest army of the world and Hindu fundamentalist government of Narindra Modi seem impotent in front of stone pelting students of Kashmir. This movement is a source of inspiration for students and youth of the whole region and world. The youth is connecting basic demands with the demand of right of self-determination and has rejected the reactionary elements sponsored by both states altogether. He said it is for the first time in the last seventy years that the movement in Kashmir is finding support in Indian workers and youth on a larger scale. Demonstrations have taken place in 18 states of India in solidarity with this movement and the main reason is that the demands of the movement have a clear class character. They have cut across the narrow nationalist tendencies, rejected religious divisions and have linked their struggle with basic problems faced by the students and youth all over the subcontinent. 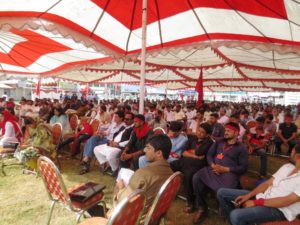 Lal Khan further added that the movement of national liberation cannot succeed with being connected to the basic problems of the masses and a revolutionary program of class emancipation. He said that the convention has given a clear message to courageous participants of the movement that the revolutionary youth across the LOC is standing by them and only on the basis of class solidarity can the fight against capitalism and imperialism be fought to its logical conclusion. No threats, state oppression and socio economic hurdles can stop the revolutionary struggle for the overthrow of capitalism in this region and all over the world. The youth in the present upheaval in Kashmir has conquered the fear of death. A socialist revolution will wipe out LOC along with all other imperialist dividing lines in the region. 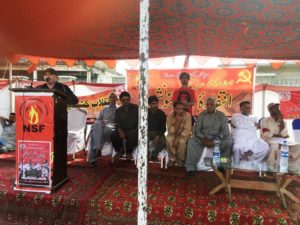 While addressing the convention Sardar Khalid Ibrahim said that despite disagreement on some of the positions, we are revolutionary companions in the struggle for people’s emancipation against the minority capitalist class. He fully agreed that no national movement can be successful until and unless it is linked with the class struggle. He said that the so-called independence belongs to the ruling class only, while the working class is suffering in the chains of national and class slavery. Religion must be separated from politics and state. Nawaz Sharif is now chanting the slogans of revolution, but we want to make it clear that it is he and his class against whom the revolution would erupt. Progressive forces should unite in the struggle against state sponsored fundamentalism and reaction. 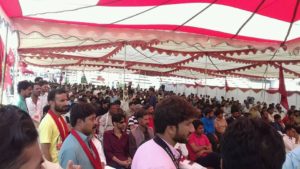 Newly elected president Abrar Latif said that JKNSF has rich revolutionary traditions. He said that the only way to get rid of national and class oppression and exploitation is socialist revolution. He vowed to continue the struggle against capitalism not only in Kashmir and Pakistan but all around the world on the ideas of revolutionary Marxism.

As was expected, the fundamentalist and fascist element made every effort to sabotage the convention. Many mullahs issued fatwas in Friday sermons a day ago that anyone participating in the convention is an apostate and threats were issues from state sponsored fundamentalist groups that the speakers would not go back alive. Similarly some self-proclaimed “international revolutionaries” active on behalf of some foreign counter revolutionary elements resorted to the worst and most malicious methods imaginable and submitted written complaints against JKNSF and active comrades to state administration and intelligence agencies. We would fully expose these ‘revolutionary’ elements in coming days.

In spite of unbearable socioeconomic problems, hurdles and attacks by the enemies, this historic convention of JKNSF has been a huge and inspiring success and giant leap forward for the forces of revolutionary Marxism in the region.