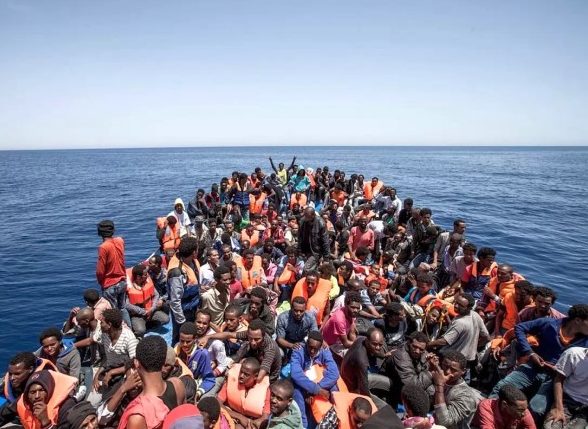 Battleship Against the Welcoming of Refugees 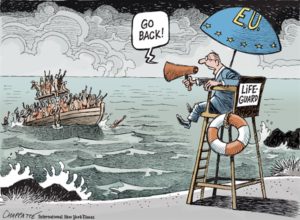 The continued arrival in Europe of political, environmental and economic refugees from Africa, the Middle East and Central Asia shows how the world is going through a global crisis.

European reactionaries like to show the image of an “invaded” Europe, even “assaulted” by “floods” of refugees whose intentions have been falsely shown to be questionable. In their racist obsession, a group of extreme right-wing European activists raised funds to lease a ship from Djibouti to “fight human trafficking” by harassing ships chartered by NGOs that come to rescue migrants in the Mediterranean sea. The reactionaries were very surprised to see the ports closing their doors one after the other, to the point of being in a technical breakdown in the open sea and to undergo the humiliation to see the ship of an NGO sent to help them by the Italian sailing authorities.

The other highlight of this epic was undoubtedly the mobilization of the fishermen, ordinary citizens and Tunisian trade unionists against the arrival of the boat in the port of Zarzis. This city in southern Tunisia is part of one of the poorest regions of the country, and during the 2011 revolution, it was one of the starting points of a part of the Tunisian youth towards the European coasts. It is also a region where the values of solidarity and hospitality are strongest, like all Tunisia’s south.

By this brave gesture, Tunisian workers and small fishermen have shown their instinctive solidarity with the victims of a system that has gone mad and which also is threatening them.

Unfortunately, if the reactionaries have managed to raise a sum allowing them to charter a boat from Djibouti to cross in the Mediterranean, it is because their nauseating ideas are finding a certain echo in Europe.

Scientists tell us that for every animal – human included – the first reflex in the event of sudden danger is to curl up on oneself and to save oneself before any other consideration.

It is this same reflex that is constantly stimulated by the European reactionaries. They take advantage of the migratory “crisis” to make it one of the factors of the social injustice experienced by the workers and to elude the consequences of the crisis of capitalism. The absence of a clear and reasoned response to this phenomenon leaves the workers in disarray and part of the latter end up turning against the refugees. The only “humanist” arguments are not enough.

The Real Cause: The Capitalist Crisis

This survival reflex stems from the fact that, in Europe, jobs and resources of the state are becoming increasingly rare. On the one hand, the gigantic crisis that capitalism has been going through since the financial crash of 2007 has immensely indebted the states that have rushed to save the banks both responsible and victims of the crisis. On the other hand, the policy of deregulation pursued on a world scale since the beginning of the 1980s has, on the one hand, broken much of the social gains of European workers and on the other prevented the underdeveloped countries from getting out from misery.

This created the conditions for an immense crisis of overproduction on a global scale where workers are being put in competitions by firms with sprawling ramifications. Some European workers accept the idea that protectionism can be one of the means of saving what they still have, and many workers in poor countries see nothing but immigration to the north in order to survive and help their families left behind. To this must be added the wars directly arising from imperialist rapacity, whether in Africa, the Middle East or Central Asia, and which push entire families along the roads of exile.

The End of an Epoch

In reality, the refugee crisis is symptomatic of the end of an epoch. By way of comparison, France welcomed nearly 130,000 Vietnamese refugees in 1979, following the victory of Ho Chi Minh and his companions over the US military. At that time, accepting Vietnamese refugees meant for the French capitalists to oppose the “communist” regime of Vietnam, which was in reality only a replica of the Stalinist bureaucracies of the USSR and China. But this gave a symbolic legitimacy of the capitalists in front of the French labor movement at the time.

Today, with the restoration of capitalism in the former Soviet bloc and in China, there is no more symbolic competition faced by imperialism. Its victims are thus left to themselves and serve to fuel the nationalist reflexes of European workers.

When a worker indulges in these closing reactions, he accepts as fatal the causes which motivate his decision, namely the breakdown of the social achievements hard won over decades of struggles. The capitalists begin by attacking the weaker links of the working class, then attacking the most protected sectors. It is by its most fragile parts that a structure break, and so is the working class.

We are therefore faced with a bifurcation and the following prospects are to be considered in the coming decades. If things continue in this way, the breakdown of social gains and global deregulation will continue to impoverish workers in both rich and poor countries. The capitalist European Union will continue to collapse on itself, and some European states may even end up breaking up. Economic competition in a context of crisis will revive tensions between EU states, propaganda of “national preference” will find a greater echo within the working class. Humanity will then again plunge deep into barbarism. The antidote to the poison of nationalism resides in revolutionary ideas, in the awareness of workers in the North and in the South of their capacity to accomplish their historical task: to put an end to destructive competition between nations by expropriating the national bourgeoisies, technology and know-how for a harmonious overall development.