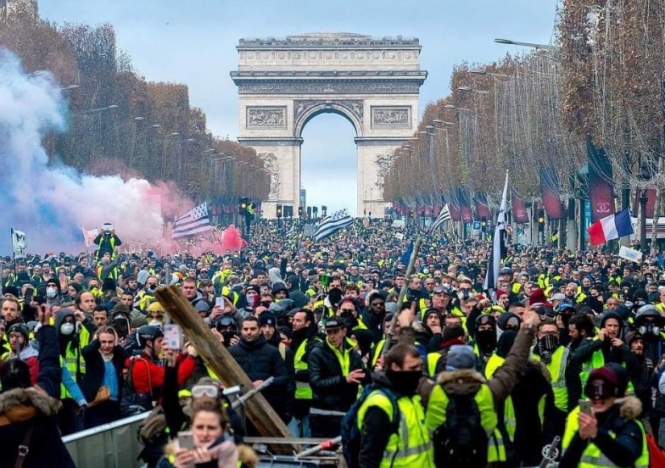 By Alex Lantier and Francis Dubois

Ahead of today’s marches by “yellow vest” protesters against President Emmanuel Macron in Paris, the French government issued unprecedented threats of a bloody crackdown in the capital. Amid rising support for the “yellow vests” among students and workers, and mounting popular anger with Macron, top officials are warning that they will stop at nothing to intimidate and threaten protesters. Some 89,000 riot police and armored vehicles are to be deployed today.

Macron’s attempt to shut down the protest by first postponing and then ultimately canceling the fuel tax increase that first provoked the demonstrations has failed. Instead, the movement has continued to spread across France and internationally, to Belgium, the Netherlands, and as far as Iraq. Amid growing demands by “yellow vests” for large wage increases, taxes on the rich, and more social equality, which his government has no intention of fulfilling, Macron is preparing for a showdown. 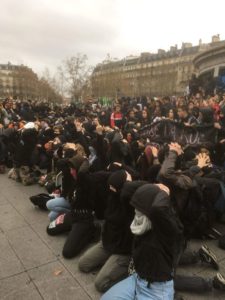 08 December, French high school students staged a mass sit-down protest against the failed attempt of the police to bully them into silence.

Yesterday, as authorities closed monuments across Paris and shops boarded up storefront windows to prepare for rioting, spokesman Benjamin Griveaux spoke to Le Parisien to slander the “yellow vests” as cop killers. “They are coming to smash, burn, pillage, and attack with the intention of killing representatives of public order,” Griveaux said. Asked if he was telling protesters not to come to Paris, he replied: “That is the advice that I would give.”

Griveaux gave no evidence to support his charge that “yellow vests” intend to kill police. After three Saturdays of protests in which violent police charges led to four deaths and left hundreds injured, not a single policeman has died. He admitted that the government made “mistakes” and did not understand “the feeling that the government is abandoning some regions of France.” He also admitted that Macron, who denounced workers opposed to his austerity policies and tax cuts for the rich as “lazy,” is seen as arrogant: “Some things we said hurt. We know it very well.”

Nonetheless, Griveaux adopted what Le Parisien called a “deliberately alarmist” tone and implying that a crackdown using deadly force is imminent against anyone defying his order not to attend protests in Paris. “Those who are present in the protests do not allow the security forces to proceed to make arrests,” he complained. “Yellow vest protesters who are sincere should not function as human shields.”

Denouncing “politicized and radicalized elements who are trying to exploit the movement” and “want to overthrow the government”, he ominously warned the media not to carry live reports on the crackdown. He said, “I am calling on the television channels to be responsible and not to broadcast live images in order not to give away the position of the security forces.”

The Swiss daily Le Temps commented, “Not since the French generals’ putsch in Algeria in 1861 has such language been heard” from a French government. The 1961 putsch was led by far-right officers desperate to maintain French colonial rule in Algeria by forcing an unpopular imperialist war on the French people.

Stunned by the outpouring of opposition among workers and youth, the government is brazenly defending repression. Interior Minister Christophe Castaner spoke yesterday to defend a shocking video in which armed riot police forced high school students in Mantes-la-Jolie to kneel, wearing plastic handcuffs with their hands behind their heads, as if they were about to be shot. The policemen taunt the youth in the video, saying: “Here is a class that is behaving.”

The video has been seen millions of times on social media, provoking shock and horror. Castaner brazenly defended the police forces, however: “This corresponds to standard practice before frisking someone.” Police are now investigating the identity of the person who shot the video in order to press charges.

Should the Macron government act today on the hysterical threats it made yesterday, it would lead to the most violent confrontation with the working class in France since bloody police assaults on workers and youth defending Sorbonne students provoked the 1968 general strike.

The growing radicalization of the working class underlying the protests emerged clearly in the “yellow vest” collective in Commercy, in eastern France, which issued a video “call for the formation of popular assemblies across France.”

It rejected the government’s call for protesters to designate representatives with whom Macron could negotiate: “It is not to understand our anger and our demands that the government wants representatives to talk with. It is to control and to bury us. Like the union leaderships, they seek intermediaries, people to talk to, to pressure to stop the eruption, whom they can then corrupt and convince to divide the movement so as to strangle it.”

They added that the “yellow vest” protests call for “a new order in which those who are nothing, and are spoken of with contempt, take back the power from all those who are stuffing themselves, from the rulers and the powers of money.”

Across France, strikes, “yellow vest” protests and student blockades are mounting as Macron continues to sink in the polls. Paris regional trains, Rennes and Le Havre mass transit, and vocational high schools are on strike, while the National Railways (SNCF) workers will protest and march at the “yellow vest” rallies tomorrow in Paris. Hundreds of gas stations across France are running out of fuel amid refinery strikes or blockades of fuel depots by “yellow vest” protesters. The National Farmers Union Federation (FNSEA) called its members to protest in the streets this coming week.

The General Confederation of Labor (CGT) union called off at the last minute a national truck drivers strike it had called to begin at the weekend, however. The CGT bureaucracy is vitriolically hostile to the “yellow vests”, and CGT boss Philippe Martinez, who previously said they were infiltrated by neo-fascists, gave another interview to Le Monde to denounce them. He insisted again that the CGT would not “come together” with the “yellow vest” protesters, saying that among them there are “people you can’t frequent.”

High school students continued to blockade hundreds of schools in cities across France including Paris, Bordeaux, Nantes, Toulouse, Tours, Montpellier, Lille, Lyon and beyond. They were joined by university students at the Censier and Tolbiac campuses of the University of Paris, protesting against the tuition hike for foreign students. Police violently charged protesting students at University of Lyon-III. The National Union of French Students (UNEF) is calling for a one-day protest against the tuition hikes for December 13.

“Yellow vest” protests are taking place in cities across France, in the face of unprecedented mobilizations of the security forces. Marseille authorities are preparing a large police deployment against multiple protest marches, as right-wing regional president Renaud Muselier launched yesterday his “Marseille declaration” warning that the “Republic is endangered” by “insurrection.” The police prefect in northern France has taken the unprecedented step of banning all “yellow vest” protests, as calls spread in Lille to occupy both train stations and blockade the entire city.

In Lyon, where “yellow vest” protesters occupied regional government headquarters yesterday, authorities are planning to block off Bellecour square, where the “yellow vests” will meet today. There, they will face an unprecedented police deployment reportedly including members of elite police assault squads trained to shoot and kill terror bombers.