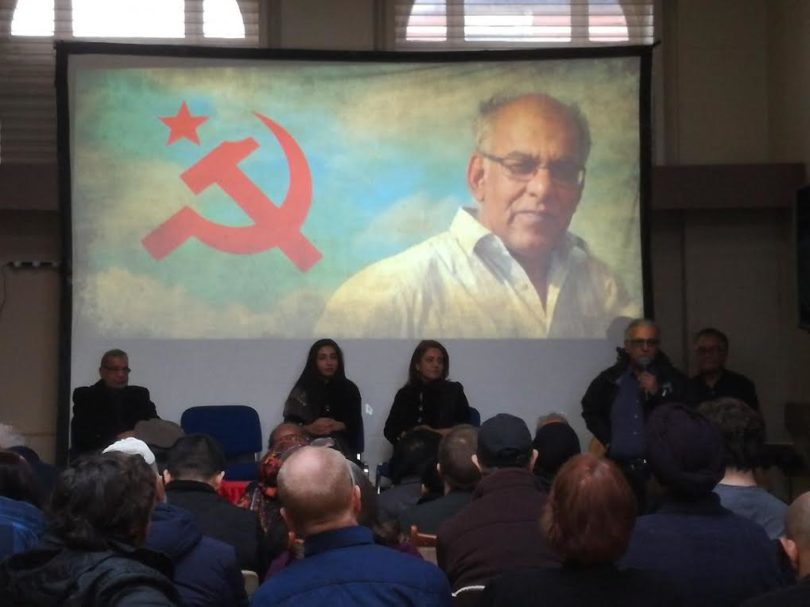 On Sunday 2nd December, the memorial condolence reference of Comrade Javed Iqbal held at Birmingham, England. The room as the Meena Centre was crammed to the rafters with not enough seating and latecomers had to stand in the spillover area. Men and women from diverse ethnic backgrounds came from far and wide across the length and breadth of the country and some who couldn’t attend sent messages of condolence and support. There were video and audio messages from friends and comrades from places as far and varied as Wales, Pakistan, Beirut and South Africa. This alone was ample indication, if it were even needed, of the love, affection and respect that Javed was held in by those of us whose lives had been enriched by his comradeship. 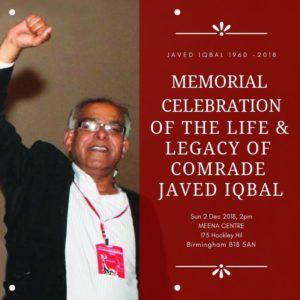 Perhaps the most common comment that could be heard throughout the event which lasted nearly 3 hours and was full of music, poetry, personal reminiscences, speeches and videos was that people, even those who knew him so well, did not know the hidden depths and the many dimensions that made up the complex person that was Javed Iqbal. His wife, partner and friend Maryam set the tone of the event by reciting a poem to describe his loss to her and going on to pay a warm tribute to the man whose untimely passing had left a large gaping hole in her life.

Those who knew Javed mostly only through political activism, heard of a warm, witty and affectionate side to him as his daughter Farrya made us laugh aloud with recollections of his fastidiousness about the length of time his tea ought to be brewed or of a particular method of cooking his favourites. Those who only knew him through his professional work were rapt with attention as they heard about how his early years in England as an 11-year-old shaped him politically. They heard how, seeing his father and older brother, in an all-male household, struggling with work, family, daily racism and everyday difficulties of a harsh working-class life gave Javed the class-consciousness that stayed with him throughout his life. He also became aware of international issues with which he remained connected till the end of life. His lifelong friendship, forged at a young age with political activists such as Lal Khan and Farooq Tariq whom he met while both were exiled students in Amsterdam, set him off on a journey back to Pakistan in the mid-1980s. Working as a political activist there during the tyranny of General Zia ul Haq’s dictatorship and cheerily enduring practical daily difficulties as he and his comrades moved from place to place trying to build a revolutionary alternative, earned him the warm sobriquet ‘the revolution’s silent soldier’ from Lal Khan.

Back in Britain after 5 years in Pakistan, Javed threw himself with customary energy into trade union, anti-racist and anti-imperialist struggles through which he inspired many. His commitment to help people through their day to day problems and issues led him to be involved in and transforming the famous Asian Resource Centre into one that truly reflected the subcontinental character of the city’s communities. As well as dedicating his life to trade unionism, Javed gave 23 years of his life to working as chair of the Asian Resource Centre. His commitment to the values of freedom of expression, equality and universal human rights led him to avenues which some found quirky to least, but which reflected his deep intellect and political philosophy. A friend recalled how Javed, never much of a mosque-goer, passionately supported the right of Muslims to have their own places of worship (a principle he extended to all religions) in the face of racist campaigns, and which earned him much respect and admiration. It was exactly these political and ethical values that led him, in the face of deepening sectarian divides and segregation among the city’s South Asian communities, to become a founding member of the South Asian Alliance.

These were the public and political aspects of his life that many people knew of and respected him for. But then people also learned about personal Javed that only his closest friends knew of. Javed who was a connoisseur of all the fine things in life. Javed who loved his music and poetry. And above all a Javed who loved his wine and his good food. And it was the most complex personal and political side of Javed which went on enthral and inspire attendees to give a rousing and well deserved send off to Javed at the end as Dave Rogers, dear friend and comrade from Banner Theatre, concluded the evening with the most fantastic and moving and lusty rendition of the Internationale. How we roared and how we laughed and how we cried and how we hugged each other as we said a final goodbye to a comrade and friend whose memorial meeting had drawn people from all corners of the country and who will remain in our lives as one of the most inspiring people we all knew.

Messages and other Video of the Event