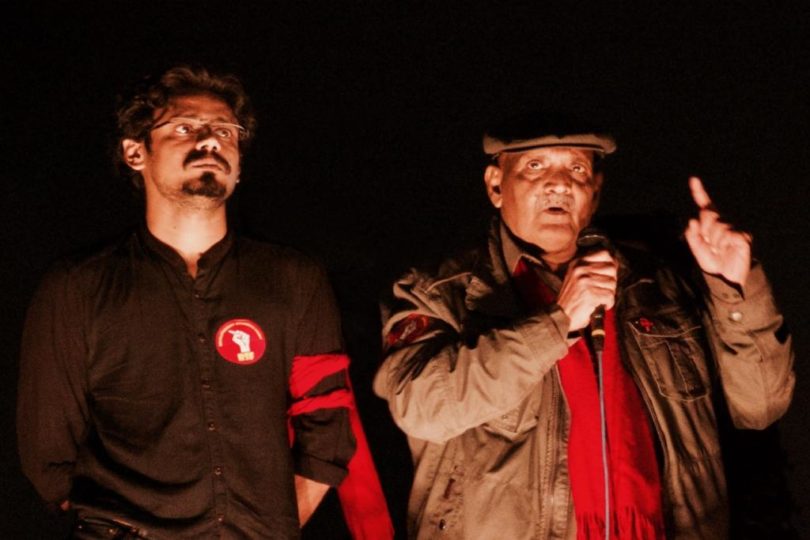 Comrade Lal Khan born as Yasrab Tanvir Gondal in a family of soldiers. The only male child in the family with three sisters. In the patriarchal society like Pakistan, and that in a remote village of Bhaun, the only son is no less than a godsend and there were high hopes with him for the future of the family. With a relatively affluent background he could have achieved a lot in terms of material wealth but he chose another family as his own, the working class of the world, and fought for its emancipation and revolution his entire life, until his last breath.

I feel myself a privileged to have been his revolutionary companion spent time with him, although I feel that it was brief, nonetheless a very close bond. Almost ten years ago I met him for the first time, and the two of us spent more than 3 hours together in Abpara, Islamabad. He was on his way to Rawalakot in Kashmir for a revolutionary meeting and had made a stop in Islamabad. In those three hours he left such a great impression on me that I wanted to be by his side all the time.

He asked if I read his articles in the daily newspapers. I said yes comrade, I read Urdu articles but can’t read English ones, as his language wasn’t easy for me to read. He smiled and politely replied after a brief pause “Look, I write the old-fashioned English that I learnt decades ago, perhaps it is easier for you to learn my archaic diction, than it is for me to learn the short hand style of your generation”.

I was still in my teen years but I felt very safe, friendly and comfortable in his company. This was one of the greatest traits of his personality that he could develop such friendship with someone 36 years younger.

A few years later, after my graduation I moved to Lahore to struggle for revolution as a whole timer. We almost lived together in this period and they are the best years of my life. He taught me, advised me and encouraged me in the building of revolutionary forces not only Pakistan but Internationally. We laughed together, shared smokes and drinks together but the real bond between us was that of revolutionary socialism, and It will remain intact forever.

On his personal qualities any of his comrades can write dozen of books, but Comrade Lal Khan can never be reduced to just his personality. He had very firm grip on the Marxism and method of dialectical and historical materialism. His writings are asset for the working class around the globe and inspiration and guiding lines for the young revolutionaries who are fighting the crony capitalism in Pakistan and anywhere in the world. He was amongst the few individuals who developed the perspective of the decline of Soviet Union prior to its collapse in one of his books, “Bolshevik Revolution 1917 and Today’s Russia” in 1989. And after the collapse of Soviet Union when many of left-wing activists and workers committed suicides or chose to support capitalism accepting the “end of history”, he and few of his comrades held high the banner of revolutionary socialism. He was among the even fewer who introduced the ideas of scientific Socialism and Permanent Revolution to this region. Before coming to Pakistan after his exile, he spent years in India for the building of the revolutionary forces. He wrote numerous articles and books on the bloody Partition of the Indian sub-continent. He used to say that “There is no more Hindustan, now there is Pakistan, Bangladesh and Bharat… only a socialist revolution in any of these countries can bring this region back to prosperity in the shape of a Socialist Federation of South Asia which can be the founding stone for the world Socialist Revolution and Communism”. Among many other topics his writings on the social behaviours and decline of society and alienation of the individual under capitalism are worth reading. The ruling elite did everything to erase the memories of 1968-69 revolution of Pakistan, but Dr Lal Khan was probably the only voice that echoes the revolutionary spirit of 1968-69 revolution. He wrote a masterpiece “Pakistan’s Other Story; The 1968-9 Revolution” on the history that has never been taught in Pakistan. He used to say and write that Pakistan’s oppressed working class has the history of only 139 days, from November 7th,1968 till the fall of the formidable dictatorship of Ayub Khan on March 26th, 1969, rest is the history of ruling elite.

He was permanent writer and member of the editorial board of fortnightly The Struggle, that has been publishing for 38 years. It’s been almost a decade that he was writing Urdu articles for Daily Dunya News and more than that period that he was writing weekly English article for Daily Times. Apart from these, he was regularly writing for Struggle.pk and marxistreview.asia (Asian Marxist Review) in addition to the editorial work. Every year he used to write the documents for annual congress of The Struggle for the last 38 years. His last writing was the document of Pakistan Perspectives 2020-21 for the 38th congress of The Struggle, which is scheduled in mid-March 2020. He wrote that just two months before his sad demise. Even a few hours before his departure he was waving his hands in writing motion. He wanted to write books on the Socialist Transformation of Society, the Rise and Fall of Ottoman Empire, the Asiatic Mode of Production in Subcontinent India and many other topics. Some of the draft blue prints are still pending in his personal computer. But the fatal cancer didn’t grant him enough time. He fought with cancer like he fought throughout his life. Once he said in an informal sitting that we will fight this cancer like we fought against dictator Zia Ul Haq, who issued shoot at sight warrant against Comrade Lal Khan. The cancer proved to be as deadly as the capitalist system that he was fighting. He lost the battle against the disease but we shall carry on his fight against the cancer of Capitalism.

Comrade Lal Khan was a permanent revolutionary and an Internationalist. His whole life was the struggle for socialist revolution. He was betrayed many times but he never gave up. His trust broken time and again but he kept moving forward and kept on trusting his comrades. Today many will say many things but not a single individual can doubt his dedication to the Socialist Revolution and building of a Bolshevik Leninist organization. Those who chose to become his opponents during his life take pride in once being in his company. They will write panegyric to him, but many of them stabbed his soul. Comrade Lal Khan’s whole life was a political journey for Socialism, his every relation was based on the building of the revolutionary organization, The Struggle, that he built on his blood and sweat. How can one pay tribute to Lal Khan while denouncing his ideology and the organization that he built? He was not a man for himself. In all his actions and interactions, his foremost consideration was always the organization, The Struggle, and how it will strengthen the forces of revolutionary socialism. He always thought of himself as The Struggle, acted as The Struggle and has left us with The Struggle.

Comrade Lal Khan left his home as child to pursue education and returned to soil as the greatest revolutionary this land as ever produced. On hearing the news of his death, comrades from every corner of the country reached his remote village in very brief time. In any other situation this would have been impossible. From Baluchistan to Kashmir and Karachi to Swat revolutionaries came to farewell their comrade. With such heavy heart a mile of his funeral procession felt like a parsec and every second a decade. The little village of his has seen many funerals and coffins of soldiers taken by the men in uniform but the final rituals of Comrade Lal Khan was historic when the women comrades lifted his coffin on their shoulders along with their male comrades under the red flags engraved with hammers and sickles, chanting slogans of Socialist Revolution and vowing to carry forward the mission of Comrade Lal Khan, and building The Struggle. They said their goodbyes to their comrade by singing the Workers’ Internationale. That was the farewell that he deserved. His ideas, his legacy and his revolutionary spirit lives on in The Struggle!