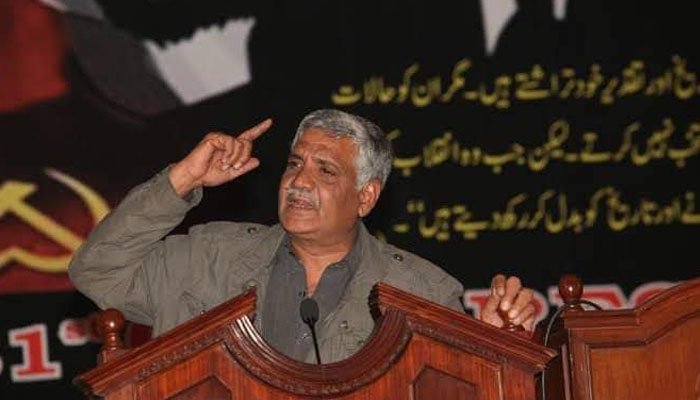 After the announcement of the sad death of comrade Lal Khan, the social media platforms flooded with the pictures, videos and posts of Dr Lal Khan and the inboxes of our pages and emails filled with condolence messages and tributes from around the globe. Here we are publishing some of these. We are still receiving condolence messages and shall keep updating this post for our readers.

“Shocked,  Great Marxist and a dedicated revolutionary is no more. V in Kashmir have lost a reliable friend who stood by us always in difficult times … unbelievable!
Will  miss u  Comrade!
Long live our great revolutionary comrade!

He has been inspiring  us with  his undaunted  spirit for creating   a better  world.  Ur contribution  will continue to encourage  us in future as well our very dear comrade”

“In honour of Comrade Lal Khan

It was with great sorrow that we learned that our comrade Lal Khan was no more.

His involvement, and that of The Struggle, with the Fourth International was recent and, for us, particularly precious. He helped to open up our movement even more than was already the case to rich, varied, revolutionary and unitary militant traditions, in cooperation with the LPP current.

A veteran of the revolutionary struggle in Pakistan, South Asia, and internationally, Lal Khan and his comrades of that generation embody for us a legacy of exhilarating struggles, such as those of the years 1968-1969, of resistance to the repression of military regimes, of exile, and of returning home in conditions that were always unpredictable and dangerous, to continue tenaciously the task of building a revolutionary movement and putting forward a clearly socialist and anti-capitalist perspective.

A veteran, Lal Khan is one of those who, like our comrade Farooq Tariq, have put their experience at the service of a new militant, radical generation, fighting against all discrimination and inequality in a progressive perspective. Until his last breath, he kept his initial commitment alive.

We pay tribute to him.

We share the grief of his loved ones, his comrades of The Struggle, his fellow fighters.

Together we will continue his internationalist struggle.

“Dear comrade, what a sad day! My deepest condolences and revolutionary affection for the disappearance of Lal Khan. Send our highest protests of esteem and consideration to Struggle’s comrades, family and friends. Lal Khan Present! Today and always!”

“Lal Khan’s funeral was worthy of a great revolutionary. You must be exhausted, these situations are terrible. But I believe that he left a rich legacy for the continuation of the struggle. I sent the response email to the invitation to the 38 Congress, see there. Strong hug. Red Salutes”

“Today, February 21st 2020, my friend and comrade, the Pakistani revolutionary Lal Khan, passed away after struggling for many months with a dreadful illness. Lal Khan – known to me since the days of our youth as Tanvir Gondal – was an outstanding Marxist theoretician. I met him for the first time back in 1980, when I visited a group of revolutionary co-thinkers in Holland, where he lived as a political exile. He organised a group of militants around a revolutionary journal, The Struggle. As soon as Tanvir was able to return to Pakistan, which was not until the 1980s, he began the arduous task of building the forces of Marxism in Pakistan. Along with Ted Grant (1913-2006), I know of no greater contributor to the theoretical and practical basis of the present-day struggle for the emancipation of the working class.

Tanvir was no armchair theoretician. In his youth, had known imprisonment and torture, at the time of the dictatorship of Zia-ul-Haq. In later years, the acuity of his political thought and analysis was rooted in his experience as an active participant in the class struggle. He was a powerful, inspiring and articulate orator. In spite of extremely difficult and dangerous circumstances, starting with nothing but ideas and an unshakeable devotion to the revolutionary cause, he and the comrades he would win to his cause succeeded in building a very impressive organisation of revolutionary militants, supported by tens of thousands of workers and youth throughout the country. In 2013, I was able to go to Pakistan and see something of these splendid achievements.

The objective circumstances faced by Tanvir in Pakistan left no room for theoretical complacency. In his writings, he courageously tackled the issues raised by imperialist domination, the oppression of national minorities, tribalism, and the sheer complexity of a society in which the productive technique and social classes associated with modern capitalism exist in the midst of the most horrific social, economic and cultural backwardness. Throughout his life, Tanvir strove to develop a revolutionary socialist and implacably internationalist policy, capable of uniting all the working people of Pakistan, whatever their language, nationality or religion, in a common struggle against capitalist exploitation, against poverty and against oppression in all its forms. This work must be — and will be — continued after his death. His ideas and his contribution to Marxist theory deserve to be more widely known among politically active workers in Europe and internationally.

As a man, Tanvir cut a handsome and gentlemanly figure. He was warm, soft-spoken and sensitive in manner. He loved music, literature and poetry. To me, he was and will always be an unforgettable friend and comrade. I extend my heartfelt sympathy to his wife, Sadaf, to his son Sher Zaman, and daughter Sehar, and to all his family. Although the death of Lal Khan is a great loss to all his comrades, the struggle to which his life was devoted will live on.”

I was fortunate to meet Comrade Lal Khan in Lahore in November 2018, while The Struggle was holding its congress, against all odds. The situation was then particularly difficult, the TLP making itself known by blocking the roads after the Supreme Court declared Asia Bibi innocent. My friend Farooq Tariq picked me up when I reached Lahore and we had a hard time getting out of the airport!

We visited Lal Khan together. He had warmly welcomed me. For my part, I immediately felt a community of history and commitment, a very natural personal closeness. We were comrades – and I was under the spell.

His loss is for me that of a friend, even if we did not often have the opportunity to be together.

I was able to appreciate his personal courage, in the face of both disease and repression, and I got to know his history, which is a precious part of the history of the Pakistani left. I was able to enrich with his writing the website of Europe solidaire sans frontières (ESSF). I was able to measure his ability to turn the page on past controversies, to be better able to shoulder all the responsibilities of a “senior” activist in backing the emergence of a new radical Left generation, radically asserting solidarities – as well as in renewing its internationalist commitment and that of The Struggle, manifested, in particular, by their engagement with the Fourth International.

Lal Khan struggled in the present to the end, perceiving new potential in the light of a rich experience. He is one of those who, in our militant generation, have not only kept their convictions, but have not locked themselves in the past either.

I see how great this loss is, for his family, relatives and friends, for his comrades, for the Pakistani and international left.

With all my solidarity,

“#LalKhan , a leading marxist of Pakistan passed away today. He was a physician who gave up his practice to dedicate his life towards organizing the working class and peasantry in the country. RIP”

My ideological teacher comrade Tanveer Gondal world knows him as Dr Lal Khan today left us. His was fighting with cancer.
Red salute to him; his guide lines will help us in our struggles. pic.twitter.com/TcIoraT6uU

“Comrade Lal Khan was the powerful voice of the working class for a class less society, he politically and theoretically trained thousands of the young people in this region. He remain committed to his ideology till his last breath, His commitment to the oppressed class will always be remembered and will always guide the working class to fight against the privileged classes and imperialist powers.”

Dr Lal Khan was a towering ideologue of this era. He was my teacher in philosophy of a socio economic political system based on human equality. We differed on strategy so I formed Barabri Party but we believed in class politics & were close friends. His death is my personal loss. pic.twitter.com/hgcUG6fRUi

“Red salute to incessant struggle for the oppressed people with passion and reason.Dr Lal khan! We love you.”

Dr Lal Khan- A genuine comrade departs. A tall man who throughout his life stood for an ideology and fought for the children of lesser god and gave voice to voiceless. RIP comrade. https://t.co/gKJhiE2QCc

We the workers and leaders of AWP are deeply saddened by the passing of veteran Marxist leader and mentor Comrade Lal Khan. We salute his struggle for the people’s politics and vow to continue his struggle through Awami workers party. Rest in Power comrade Lal Khan! pic.twitter.com/tVygobFeLl

Rest in Peace comrade Doctor Lal Khan. I know you since I was a young school girl. You used to have your Aggregates in Quetta and I used to attend your program. A big lose for Socialist politics in Pakistan. May your legacy live long.#DoctorLalKhan#RestInPeace#RedSalute pic.twitter.com/UaNSYSBK5h

“Deeply saddened to learn of Dr. Lal Khan’s passing. He was one of the most committed & tireless Marxist thinkers in the country and dedicated his entire life to fighting for the working class. May the seeds he planted continue to multiply & bear fruit. Rest in power, comrade.”

Lost for words to express my grief on the exit of my life long friend comrade Lal Khan. His unwavering commitment & dedication to socialism was incredible. He will always be with us in every step that we take towards socialist revolution so no goodbye to you Tanvir.

“This photograph, taken on #StudentsSolidarityMarch, is the perfect depiction of Comrade Lal Khan. He remained a committed teacher and guide for young people throughout his life and has left behind a great void. Rest in peace, comrade.”

“Comrade Lal Khan is no more with us,He was great intellectual and revolutionary Marxist. His contributions for employment of working class and oppressed segments of the society would be remembered.”

We lost a revolutionary today. The red star of Pakistan’s left, Dr Lal Khan is no more with us. Dr. Lal khan was one of those rare group of revolutionaries, who despite world wide proclamations in the 90s about the death of communism kept the banner of revolutionary Marxism flyin pic.twitter.com/F9hrYUoFnU

Comrades of The Struggle receiving condolences messages around the globe and we’ll keep updating this post.