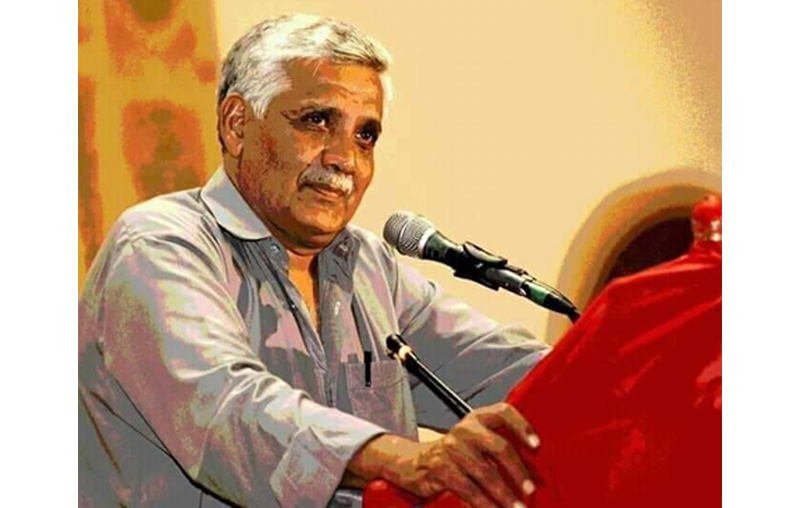 Editor Asian Marxist Review​ (AMR), International Secretary of Pakistan Trade Union Defence Campaign​ (PTUDC), Founder of The Struggle​, known Marxist intellectual, Writer and Revolutionary leader, Dr Lal Khan, departed one year ago on 21st February 2020. After his demise, Marxists and revolutionaries of The Struggle bid farewell to Lal Khan with the historic 38th Congress 2020, dedicated to the struggle of Comrade Lal Khan. Last year, due to the pandemic many condolence references in his memory were postponed But commemorated this year in many cities on his first death anniversary, many references are yet to be held. Here we are publishing a brief report of these condolence references.

On the first death anniversary of Comrade Lal Khan a tributary meeting held at his hometown Bhon, were his remaining are buried. Comrades of JKNSF, PTUDC and RSF gathered at the grave, paid him tribute and sang workers’ Internationale. 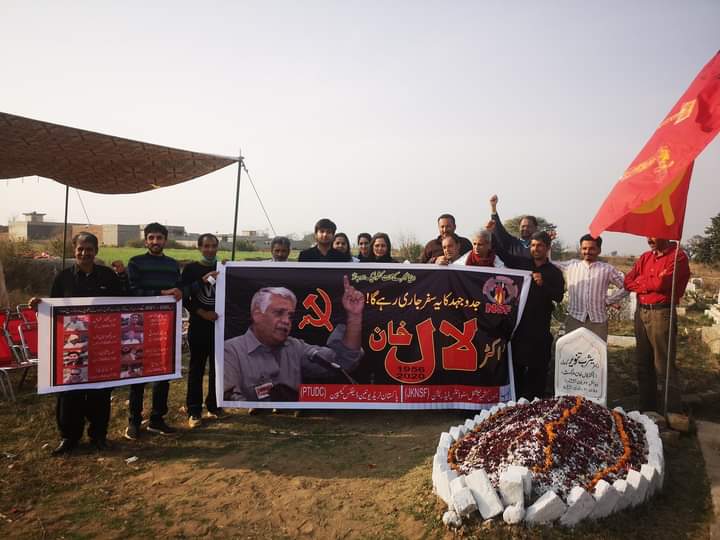 On February 21, the Pakistan Trade Union Defense Campaign (PTUDC) and Revolutionary Students Front (RSF) on the occasion of the first death anniversary of Comrade Lal Khan paid tribute to the comrades who left us in 2020-21. Many students, women and workers from Sukkur, Dadu, Khairpur, Hyderabad, Mirpur Khas, Thatta, Karachi and nearby areas participated in the reference held at the Arts Council.

In the reference, tributes were paid to Amjad Shahsawar, Nathu Mal, Muhammad Ahmad Warsi, Khabar Khan, Haider Abbas Gardezi, Usman Mirza, Deva and Zubair Jara. Families of Muhammad Ahmad Warsi, Nathu Mal and Dev’s also attended the program. The speakers said that we will continue the revolutionary mission of Comrade Lal Khan and other late comrades and move towards the world revolution by connecting the movement of socialist revolution with other regions of the world. The program ended with Workers’ Internationale. A joint stall of The Struggle Publications and Ilm-o-Adab Publishers was also set up on the occasion.

Addressing the audience in Rawalakot on February 23 to mark the first death anniversary of renowned Marxist intellectual, writer and revolutionary leader Comrade Lal Khan organised by the Jammu Kashmir National Students Federation (JKNSF), the speakers said that Dr Lal Khan was a great revolutionary of the Subcontinent who’s personality, ideas and struggle will continue to guide every revolutionary who struggles for revolution and freedom. Through more than forty books and thousands of articles, he explained the backwardness of the region on a scientific basis and showed the way for the establishment of a classless society through a socialist revolution. He possessed such an all-encompassing personality and he had such command over the Marxist science that he was to do not only revolutionary work but also fought valiantly against the dictatorship of Zia-ul-Haq. For decades, he has developed a comprehensive revolutionary leadership across the country, equipping the youth with ideas and paving the way for the salvation of the region’s workers and youth. He was the only revolutionary leader in the south Asian subcontinent to explain the causes and revolutionary solutions to the national question, language, gender and other questions. That is the reason he was able to carve out a coherent revolutionary tool for people of different nationalities, races and religions.

A memorial reference on the first death anniversary of the great revolutionary leader and thinker Dr Lal Khan was held at the National Press Club Islamabad on February 28, organized by the Pakistan Trade Union Defense Campaign (PTUDC) and the Revolutionary Students Front (RSF) workers, students, lawyers journalists and people from different walks of life participated to pay homage to the revolutionary struggle of Dr Lal Khan. Speakers described Lal Khan’s tireless revolutionary life and ideological endeavours as a ray of light in a dark age. The speakers said that in such an era, Lal Khan not only defended the ideology of revolutionary marxism but also laid the foundations of a revolutionary organization all over Pakistan. The collapse of the Soviet Union disappointed many revolutionaries and the filthy imperialist propaganda against socialism had greatly weakened the narrative of socialism in the public eye. Raising the banner of revolutionary socialism in such a dark age was more difficult and challenging than ever and comrade Lal Khan struggled all his life with immense courage and dedication in this regard. Dr Lal Khan’s life was a constant struggle. Tribute to him can only be paid if a socialist revolution is carried out in Pakistan and around the world while continuing his mission.

On the occasion of the first death anniversary of the great Marxist intellectual, writer and revolutionary Dr Lal Khan, a memorial reference was held on February 21 at the People’s Secretariat Kot Addu. Ali Akbar chaired the program and commenced by giving a brief overview of the struggle of Dr Lal Khan from his student days to his death, to the building of a revolutionary organization in the most relentless and unfavourable conditions. Addressing the participants, the speakers said that Dr Lal Khan had established a revolutionary organization based on dialectical science in the backward society of Pakistan at a time when no one could even speak of socialism. The giants of Marxism kneeled before capital. Defenders and apologists of capitalism were celebrating the collapse of the Soviet Union all over the world. But a Marxist revolutionary in a backward country like Pakistan declared that the victory of capital was merely temporary. Then a new capitalist crisis and a new class war broke out and during this time Lal Khan began the search for revolutionary forces all over the subcontinent, including Iran and Afghanistan, and in a very short period, he was able to build the foundations of a revolutionary organisation which is unprecedented in history. He also used Marxist science to analyse the dynamics of Pakistan and the subcontinent. And he died marching on the revolutionary path but he has left behind a disciplined organisation. In the days to come, this organization will play a decisive role in the revolution. Prof. Anjum, Naeem Chishti, Engineer Wasif, Amir Latif, Hameed Masih, Shehryar Zauq, Shehryar Ilyas Sherry, Mazhar Iqbal Kaku and Nadeem Pasha spoke to event. The program was attended by trade union workers, labourers, lawyers, farmers and students.

The speakers said that the only way to pay homage to Dr Lal Khan and Haider Abbas Gardezi is to play a historic role in the struggle for the socialist revolution and eradicate poverty, inflation, unemployment from the world. The struggle for the cure of homelessness, economic misery, oppression and barbarism will continue.

On Feb 28th 2021 a memorial reference was organised by PTUDC and RSF on the first death anniversary of Dr Lal Khan in which students, workers, youth and peasants participated in huge numbers. Badr ul Din Panhwer performed the duties of stage secretary and Iqbal Memon welcomed the guests.

Abid Zounr of Revolutionary Peasant Struggle, Gul Hassan Shahani, Sikandar Otho of Unemployed Youth Movement (BNT), Zia Zonar, Khadim Khoso, Sadam Khaskheli, Amin Laghari, Ajaz Baghio and Anwer Panhwer of PTUDC Sindh spoke to the participants. They spoke about the revolutionary struggle of Comrade Lal Khan which he continued till his last breath. Comrade Lal Khan started his struggle from his college days against the dictatorship of Zia ul Haq, because of which he had to go into exile. But he didn’t stop there, he laid the foundations of a revolutionary organisation setting aside all national and racial prejudices to fight for a revolutionary solution to the problems of workers and peasants. He fought for the ideas of marxism and socialism which is the only path to eliminate poverty, hunger, unemployment and lack of health care in this day and age. Lal Khan is not just a man, he is an idea that will continue to burn in our hearts like an eternal flame. The program was concluded with the Workers’ Internationale.

A memorial reference was organised on March 3rd, 2021 by the PTUDC at the Faisalabad Press Club on the first death anniversary of Dr Lal Khan. The program was attended by students, journalists, workers, lawyers and people from several other walks of life.

On the occasion of the first anniversary of comrade Dr. Lal Khan, pictorial highlights of the participation of revolutionary workers and youth belonging to various walks of life in the memorial reference of 03 March 2021 held at Faisalabad Press Club. pic.twitter.com/h5FRjpUYLW

Presidents Malakand Bar Association and PTUDC leader Ghufran Ahad Advocate along with Sahibzada Bacha, President Swat Teachers Association Nawab Ali Khan, Asif Rashid of RSF, President Tehsil Bar Association Chakdara Naeem Khan, Abdul Malik, Idrees Bacha, Ammar Yasir, Bacha Gul, Member Provincial Council Pakhtunkhwa Milli Awami Party Shehab Chakdarwal, Khurshid Ali Khan of PPP and Central Organizer RSF Awais Qarni addressed the gathering. The speakers paid tribute to the revolutionary struggle of Dr Lal Khan. The speakers said that Lal Khan started his revolutionary work in difficult times and spent every moment of his life for revolutionary struggle. He further said that Lal Khan not only wrote many books but also put them into practice. Lal Khan is not physically with us but he will always be with us in the form of his revolutionary work, writings and ideas. A true tribute to Dr Lal Khan can only be paid with a successful socialist revolution. The seminar ended with the Workers’ Internationale.

Addressing a function organized by JKNSF and PTUDC on March 7th organised on the first death anniversary of the great Marxist intellectual and revolutionary leader Dr Lal Khan, the speakers said, Dr Lal Khan was a great thinker of this era. The candles lit by him will continue to light the road to revolution and the revolutionary struggle will continue till the completion of his mission. Dr Lal Khan played a key role in building a real revolutionary alternative in subcontinent South Asia and around the world, including the defence and promotion of Marxist ideology. He had a versatile personality. He was a brilliant writer, charming speaker, brilliant administrator, fearless, and a rock-solid figure with his ideas.