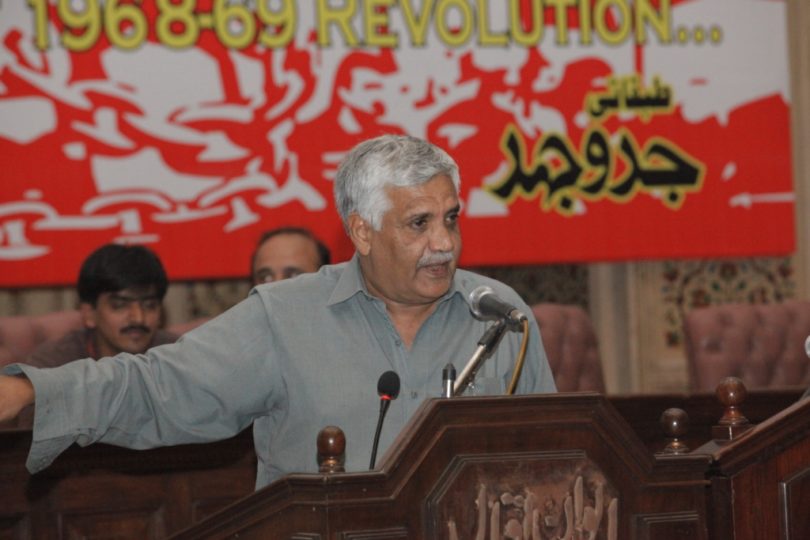 Lal Khan, whose name needs no introduction in the revolutionary politics of not only Pakistan but world over, breathed his last today on 21st February at 7:00 PM in Lahore. He had been fighting cancer for the last one and a half year. He was 64.

He was one of the founders of ‘The Struggle’, a fortnightly Marxist magazine in Urdu language, chief editor of Asian Marxist Review and international secretary of Pakistan Trade Union Defence Campaign (PTUDC). Lal Khan started his lifelong revolutionary struggle as a student leader at Nishtar Medical College Multan in late 1970s and soon got interested in the ideas of Marxism and revolutionary socialism. During despotic Zia-Ul-Haq regime he endured floggings and incarceration and later went into exile for many years when martial law courts sentenced him to death for not abandoning his political activities. For more than four decades he fought under the banner of revolutionary socialism for the historical interests of working class. In the dark period unfolding with the collapse of Soviet Union he not only laid the foundations of a Marxist organization in South Asia but ruthlessly defended, through dozens of his writings, the ideas of Marx, Engels, Lenin and Trotsky against the imperialist propaganda onslaught of so called failure of Socialism as a social system. His confidence and belief in the communist future of mankind didn’t shake till his last breath.

The journey of his life may have come to an end but he will live long in the struggle for the emancipation of mankind from capitalist exploitation and tyranny in Pakistan, South Asia and whole world. His legacy would inspire many generations to come who have to keep the red flag flying high. We would like to pay tribute to him in the words of comrade Lenin:

What a torch of reason ceased to burn,
What a heart has ceased to beat!

Farewell comrade Lal Khan…  your memory would always be honored.