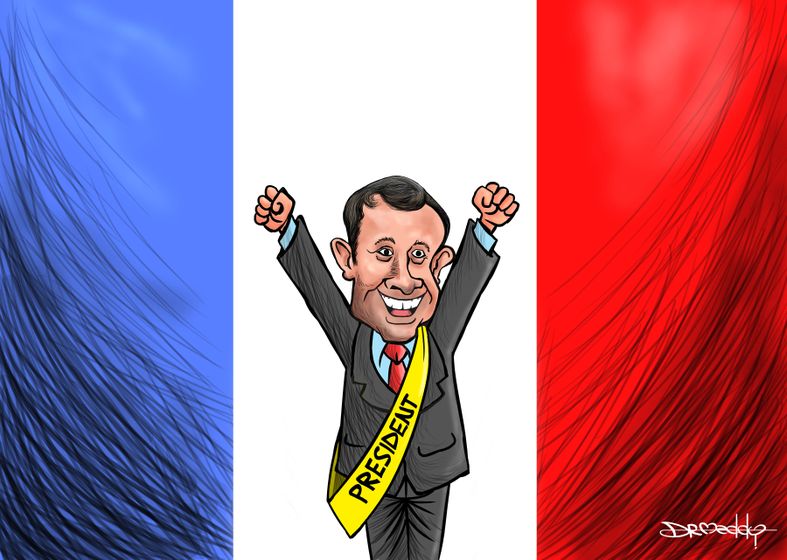 The election of Emmanuel Macron as President of France met with an enthusiastic response from the financial markets. When the results were announced, the Paris stock exchange surged upwards. Angela Merkel, Jean-Claude Juncker and all the supporters of austerity in Europe expressed their satisfaction. The very fact that the representatives of the existing order welcome the election of Macron should suffice to tear away the media packaging which presents him as a radical politician of a new type. As the former Minister of Economy and Finance under François Hollande, as well as his closest policy adviser, his politics, far from being new, will run along the same well-worn tracks as those of Hollande and Sarkozy. Shortly after his investiture, Macron appointed a Prime Minister from among the leaders of the right-wing Republican Party (formerly the UMP, under Sarkozy).

In the course of 2016, sensing that the policies of the Hollande government would lead to an electoral disaster, Macron skillfully adopted a critical posture, placing himself to the right of the government. In spite of the servile attitude of Hollande and his Prime Minister Valls towards the capitalist class, it nonetheless considered that they had not done enough to satisfy its demands. Macron promised a more aggressive policy. And when the chances of François Fillon, the candidate of the Republican Party were compromised by a corruption scandal, Macron appeared as a good substitute in the eyes of the capitalists. Later, with the help of the mass media, Macron projected himself as a politician of the center, neither right nor left.

The problem with so-called center politics is that they do not exist, especially at the present time. An ever-widening abyss separates the classes. Society is dominated by a class for which the destruction of all that stands in the way of capitalist profit is of vital importance. This reality leaves no room for compromise or half-measures. All parties and politicians must choose sides. And Macron chose his a long time ago. The myth of his centrism will rapidly explode. The very first measures he will take will give tangible signs of his unfailing allegiance to the capitalist class and will include the removal of the few remaining clauses of the labour laws which survived the counter-reforms carried out under Hollande. In 2012, the popularity ratings of Hollande collapsed within a matter of weeks. Those of Macron will no doubt fall just as sharply.

The decline of French capitalism polarises society. The capitalists defend their power and profits at the expense of the workers, who take the full brunt of increasingly unstable jobs and mass unemployment. The middle classes form a buffer between these two camps, and as long as they adhere to the existing order, greatly contribute to its overall stability. However, the economic basis of the revenues and expectations of the middle classes is being rapidly undermined. Ordinarily, they tend to support the mainstream capitalist parties or else moderate social-democracy, whose programmes are more or less identical. Macron, in fact, personifies the fusion between them, and the middle classes constitute his main pillar of support. However, the election results show the beginnings of a tendency for the middle classes to drift towards the Front National on the right and towards the Jean-Luc Mélenchon’s France Insoumise on the left. It is probable that this will continue under Macron. His policy is shaped in the interests of big finance capital, which means a deterioration of the living conditions not only of the workers but also of the middle classes.

Macron’s presidency will, in all probability, be weaker and less stable than that of Hollande, especially if his own party, En Marche!, does not win a majority in the parliamentary elections in June. In this case, he will have to come to an agreement with political forces whose support will only be given as long as it is in their interests to do so. Initially, it will no doubt be possible to cobble together some sort of coalition government. But this will tend to dislocate under the pressure of events. Even if Republican members of parliament agree to collaborate with Macron initially, they will turn against him later, in order to take advantage of his falling popularity. And so governmental instability will further add to social instability.

Wth the weakening of its world position, the decline of its industrial apparatus, the loss of market share in the world, in Europe and even on the home market, the problems of French capitalism are far too deeply embedded in the geopolitical realities of our times to be resolved by mere institutional changes. Hollande, like Sarkozy before him, failed in his attempt to boost the French economy. Macron will also fail. Among the first setbacks he will suffer, will be the one to be inflicted upon him by Angela Merkel. In 2012, Hollande promised to renegotiate European policy with Merkel. Macron is now saying the same thing. The problem is that on many questions the interests of France are in total contradiction with those of Germany. This is the case, for example, in relation to the exchange rate of the European currency. Merkel made no significant concessions to Hollande, and Macron will do no better, because the vital interests of Germany are at stake. And Germany is by far–and even more so than in 2012–the dominant power within the European Union. Germany’s trade surplus was 278 billion euros in 2016, compared to a negative trade balance of 49 billion euros for France. The gap between the two countries is widening, to the detriment of France.

The European Union has begun to dislocate. According to its propagandists, it should have led to economic growth and greater prosperity. But just the opposite has happened. The economies of practically all the member states are stagnating. Low paid jobs and unemployment have reached massive proportions. The opening up of national frontiers, increasingly seen as a threat to the economy and to national security, is provoking a reaction which can only reinforce the nationalist and protectionist tendencies within the member states. The further development of these tendencies could lead to the break-up of the European Union. In France, the nationalist right has been gaining ground over many years, going from 5,525,034 votes in 2002 to 10,638,475 in 2017. The Front National is gathering support among the middle classes, among shopkeepers and tradesmen, lawyers, doctors and other professions. But it is also attracting support among workers who are exasperated by poor working conditions and unemployment.

In the depths of society, far from the world of professional politicians and media experts, the masses feel that the mechanisms of the existing social order operate against their interests, and are looking for possible avenues for change. The anti-system propaganda of the nationalists, with its sharp and categorical formulations, is finding an echo within society. Under Macron, whose policies will lead to a worsening of the living conditions for most people, the Front National will no doubt make further progress. The idea that Macron will serve as a rampart against the Front National is completely false. On the contrary, he will give a further impulse to its development.

Nature does not tolerate a vacuum, and the vacuum created by the difficulties of the French Communist Party (PCF) is for the moment being filled by the left-reformist France Insoumise. While the leadership of the PCF was losing precious time chasing after an impossible and undesirable alliance with the Socialist Party, Jean-Luc Mélenchon began a large-scale campaign mobilising tens of thousands of people. His speeches inspired and motivated those who attended the many mass rallies. In the end, he was only defeated by a margin of 600,000 votes. Of course, the future development of France Insoumise is still very much an open question. Its programme has the same essential flaws as that of the PCF. It does not raise the question – fundamental in our view – of the ownership of the banks and the means of production. If Mélenchon would have won the election, the capitalists of France, of Europe and internationally would have reacted furiously, doing everything in their power to bring the new government to its knees. In spite of the radical tone of the programme Mélenchon defends, like that of Tsipras in Greece, it gives absolutely no indication of how this reactionary offensive could be overcome. The programme does not go beyond partial social and political reforms on the basis of capitalism.

The question of the programme of the labour movement will prove to be of vital importance in the years ahead. Many of the workers and many of the people belonging to the middle strata of society who have been seduced by the phoney radicalism of the Front National could be won to the ideas and the programme of international socialism. The essentially defensive posture of left reformism and its refusal to strike and the root of the power of the capitalist class open up possibilities for the nationalists and for the capitalist reaction in general. After all, if there is no alternative to capitalism, then people must look for a way out on the basis of the system as it is. In conditions of worsening living standards and the exasperation of the masses, this is how the ground is laid for the poison of racism and nationalism to do its work.

The tasks before us are therefore clearly identifiable. We must strengthen our trade union and political organisations, sweep aside the bureaucratic rivalry which divides and weakens the movement. While struggling against attacks on living standards and democratic rights, we must lay the programmatical basis for the reorganisation of society on a new socialist foundation. The expropriation of the capitalist class would open the way for a democratically established plan of production, in the interests of the mass of the population. We must unite around a programme for the revolutionary transformation of society.