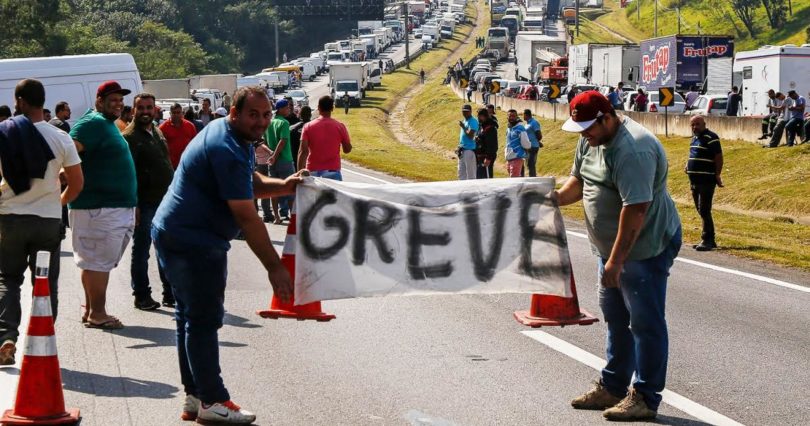 The hauliers’ strike shook Brazil out. After 9 days of strikes and roadblocks, fuel and food shortages have been experienced throughout the country. In the market shelves, some products are already priced up because of the shortage of goods. Furthermore, several industrial plants are nearly or completely paralyzed. In short, Brazil has been halted.

Weakened and cornered, Temer has made huge concessions on Sunday (27th May) on his attempt to end the strike, meeting most of the hauliers’ demands, such as the diesel price reduction- 0.46 BRL – for sixty days, a minimum price for freights, tolls exemption suspended axle lorries, among other points.

However, the strike went on and new players had to be brought in: repression by the army, state governors intervention for negotiation, and so on. To increase even more the pressure upon the government, the oil workers decided to go on strike. It is important to highlight that, even before the strike starts, a TST (Labour High Court) minister issued an injunction stating the strike as illegal and determining 2 million BRL daily fine. Together with other reasons, that situation has cooled the movement down. But the consequence came just in sequence, on 1st June, when the president of Petrobras, Pedro Parente, stepped down – during a bank holiday. Directly linked to the international market, Parente was and the main responsible for the Petrobras assets privatization and the petrol prices policy, which has been, together with other oil-based products that got to be readjusted twice in a week. Actually, that was the main reason for the hauliers’ strike. It was an important setback for the illegitimate Temer government, who had, one day earlier, communicated through one of his ministers that nothing would have any change.

Analyzing the Hauliers’ strike: Progressive, However with Contradictions

The hauliers’ strike and its road blockages have been supported by 87% of the Brazilian people, according to the polls carried by the Datafolha Institute, on 30th June – and that with the fuel and goods shortages caused by the strike. The strike was carried out by autonomous hauliers, employed lorry drivers and by businessmen of the transportation companies. The movement involves both, the workers and bosses. However, the leading role of the autonomous hauliers is evident. There was a lockout, but it was not the dominant element. The radicalized strike of lorry drivers is the determining factor in the movement. On the other hand, the main demand – reduction of fuel prices – is fair and served as a trigger for a dammed social discontent.

The strike made very clear the failure of the oil company’s current pricing policy, which today varies with the changes of the international market. Successive increases in fuel prices penalize the majority of the Brazilian population and harm the national sovereignty. Only the bankers, foreign oil companies and international profiteers have benefited from it. That policy serves Petrobras privatization, which is at the mercy of the interests of the financial market and not the working people needs or the Brazilian social development.

The hauliers’ movement is progressive because of its main demand, for objectively facing the privatization strategy of Petrobras board and for stimulating other workers’ struggles. However, there are significant contradictions in this movement: the far-right and bourgeois players disrupt the political sense of the strike. For example, Jair Bolsonaro has been supported by some of the hauliers for his candidacy and declaring his support for the strike, as does the MBL and other far-right organizations. These sectors take advantage of the current crisis to promote the agenda of “military intervention”, which has been strengthened in the last days, despite the use of the Army and the participation of the military high command in repressing the strike. The danger for the movement to be led and capitalized, politically, by the most reactionary forces is also there, and that’s the real threat.

To avoid that risk, it is necessary to understand the direction of the framework in which the strike unfolds. The left groups who consider the strike as a reactionary movement, from its start, are making a big mistake – and therefore leaving the way open for the far-right to consolidate and gain influence. In the other side, those are also wrong who are rubbishing participation of the bosses and corporate, and influence of reactionary political forces, they want to imagine and consider only the positive aspects of the objective process for themselves.

We believe that it was very important to support the hauliers’ strike, raising an independent workers’ program and confronting the right-wing and the far-right sectors involved in the process. That was, incidentally, an important element of this movement that had even signs of a mass strike. Unlike the June and July of 2013 demonstrations, the Left dived into the movement’s dispute. In several picket blocks built by the hauliers, the MST (Movement of the Landless Workers) donated food and helped on its preparation and serving. In other many picket blocks, the trade unions and social movements joined the lorry drivers. One example was the one built on the biggest port in Latin America (in Santos, São Paulo state) where the dockers, construction workers, metalworkers and public-sector unions united with the hauliers and even held common assemblies to define the direction of the movement. Despite the paralysis of the leadership of the PT and CUT, the PSOL, several unions like the MTST, MST and other movements intervened very well. The oil workers’ strike attempt was a signal to unify the struggle of all workers by taking advantage of the moment and bring up a united organized movement of the various institutions’ workers, such as oil workers, electricians, underground workers, auto workers, public servants, teachers, etc to the scene. If the working class comes to the scene, in an organized and coordinated way, it is possible to overthrow this government and conquer significant achievements.

In this situation of huge social and political crisis, it is necessary to understand the objective situation, without hesitation. While Temer government is agonizing, the bourgeoisie and the traditional right are confused, the far-right acts resolutely to seize the moment and gain influence. On the other hand, most of the left and the trade unions, so far, are paralyzed in a critical situation. The PT and CUT, for example, made only protocol declarations. The trade unions, absurdly, instead of broadening the struggle, postulated themselves as mediators for the conflict, trying to calm down the strike. In that way, they are facilitating the advance of Jair Bolsonaro and the military intervention agenda. The Fascist candidate is strong but does not have the majority support among the workers and the people. The Left and the unions can influence the whole social and political process.

In this sense, the trade unions, social movements and leftist parties must meet immediately to schedule a national day of struggle. A day of the strikes and mobilization to raise the flag of the immediate reduction in the prices of fuel and cooking gas (without reduction of Social Security funding), which defends Petrobras (demanding the end of the current prices policy and dismissal of Pedro Parente) and the end of Eletrobrás privatization process. A day which demands more jobs, decent wages, the repeal of the Labour Reform and the end of the social investments freezing. It is also important to advocate a tax reform that will demean the workers and the poorest, and increase the taxation of the richest, as well as defend the democratic freedoms, which are currently under threat. A day which demands Lula’s freedom and justice for Marielle and Anderson.

The economic recovery has failed and the social crisis deepens every day. Two years after the coup commanded by Temer, unemployment has risen – there are already almost 30 million Brazilians unemployed or underemployed -, there are no resources for education, health and social housing. The wages are very weak and violence is rampant. The economic “adjustment” and “reforms” program has benefited only the super-rich, while the vast majority of the population lives with increasing poverty, scarcity and inequality.

The working class is paying off the crisis. Social unrest is widespread. It is time to join forces to struggle and get on the scene so as not to let the far right capitalize on the just demand of the hauliers and the discontent of the working people. 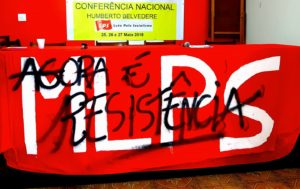 In this complex situation, after a year of common intervention in the daily struggles, debates and of principles and perspectives dialogues, the two organizations are now unified.

This merging has a profound significance in the Brazilian and international socialist movement, and even more so in this situation. Surely many activists, groups and organizations have been observing us and will keep doing that in the next period. The merging of groups and militants of diverse origins is a rare occurrence, and if we succeed we will recognize the results in the building of our organization as an important part for the building of a revolutionary, worker, a socialist party with mass influence in Brazil and in other countries. And an international organization will be a tool to work as a supporting point for the everyday struggles worldwide. An organisation that is present in the struggles for immediate and historical working-class interests, within the best traditions of the broad labour and socialist movement, from the exploited and oppressed of all the world.