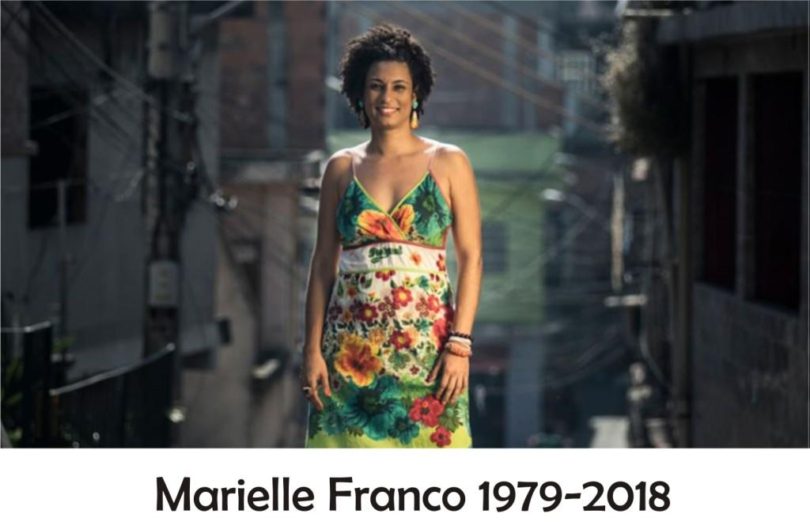 We, the comrades in Pakistan, express our heartfelt solidarity with the relatives, friends and comrades of Marielli Franco and condemn this barbaric act. We stand by the family, friends and comrades in this moment of pain and indignation. Marielle Franco, the member of Socialism & Freedom Party (PSol), elected councillor in Rio de Janeiro with the fifth highest votes in 2016 was an outspoken fighter for justice and against police violence. Franco and her driver were shot dead on 14 March in a drive-by killing.

Franco’s killing shattered the cavalier attitude that prevails in much of this megacity in the face of rising violence. On the Wednesday eve, she was heading to a meeting of empowering black women along with her driver Anderson Pedro Gomes when assailants sprayed her car with bullets, and both died on the spot.

Franco, 38, was an active voice against police and state voilence and military occupation, in recent days, she was appointed to play a key role on a council commission tasked with conducting oversight of the military intervention. This event, coupled with the rise in murders of leftist activists since the 2016 coup, the military takeover of Rio de Janeiro’s security apparatus, the violent crackdown on striking public sector workers are raising worries that Brazil is moving into a more repressive stage of the Coup. History teaches us that acts of governmental violence against the left are rarely revenge, they are tactical. 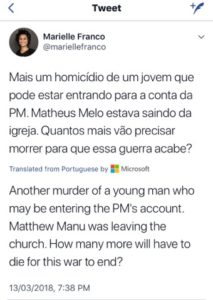 A wave of protests in sadness and dismay at Franco’s killing have been organized around the country. A day before her death she tweeted “How many more must die for this war to end?” referring to the death of another the young man, Matheus Melo, 23. She left eighteen years old daughter behind her.

The hypothesis of a political crime, an execution, can not be ruled out. Marielle had just denounced the Military Police’s brutal and truculent action in the Irajá region of the Acari community. In addition, the characteristics of the crime, with a car coming alongside Marielle’s vehicle, and someone firing many shots and fleeing, strengthen that possibility. Therefore, we demand the immediate and rigorous investigation of this heinous crime. We will not be silenced!
Her life will always be inspiring and stimulant in the struggle for a communist society.