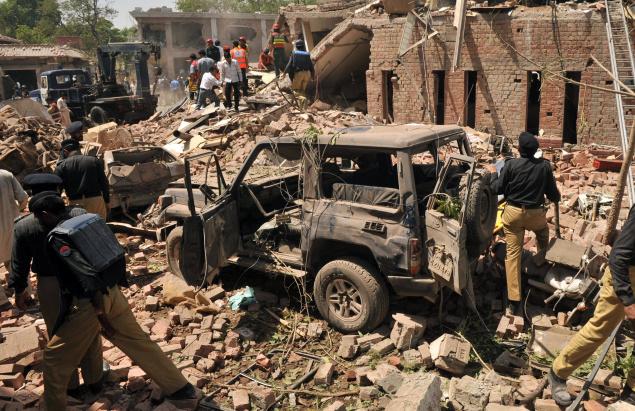 Last week a new National Internal Security Policy (NISP) report for 2018-2023, formulated by over 120 experts and bureaucrats was released. It made some startling revelations: “The threat of transnational terrorism is rearing its head again. TTP militants have relocated to Afghanistan. The Islamic State (IS) is establishing a footprint in Afghanistan near the Pakistani border with a very real potential of spill over into parts of Pakistan. This situation has been compounded by the return of battle hardened militants from Syria and Iraq…Young people from relatively affluent and middle-class backgrounds, educated in mainstream universities and schools, are also vulnerable to extremist ideas and narratives.” These facts are in contradistinction to the proclamations of the subsequent regimes that the successful military operations have eliminated terrorism.

Despite the ‘constitutional’ act of merging FATA with the KP and the relentless assertions of bringing stability and peace in these tribal areas by the ruling hierarchy, the situation is still fragile. Stability, development and prosperity seem to be a pipedream for the inhabitants of the region. The recent unrest in South Waziristan and the incident in its capital Wana laid bare the reality of these claims. Decades of the policy of governance through the so-called Peace Committees or what the locals call the ‘Good Taliban’ have only exacerbated the violence.

These barren wastelands have been devastated now for more than four decades by the imperialist wars, reactionary insurgency and fundamentalist terror. Bordering with Afghanistan this is perhaps the poorest and the most underdeveloped region on the planet. In retaliation to Afghanistan’s Saur revolution in April 1978, the US imperialists instigated a devastating ‘Dollar Jihad’. The clergy hired to incite religious sentiments to set off this Jihad became rich overnight and were soon riding SUVs with massive caches of dollars pouring in. After the withdrawal of the Soviet forces in 1988, imperialist funding suddenly came to an end. That was replaced by the multibillion-dollar business of smuggling narcotics and arms, kidnappings and ransom, extortions and other criminal networks initially set up for these warlords by the imperialist strategists. These terrorist groupings fragmented and clashed in the lust for a greater share of black money extracted from this harrowing orgy of bloodshed and terror in the name of religion. This drug, gun and crime infested economy and culture spilled over into Pakistan’s society. Zia’s despotic regime had viciously imposed Islamisation and devised criminal means to finance religious sectarian violence to prolong it’s own rule, and effect the dictates of US imperialists.

In the present scenario, the hypocrisy of imperialism and fundamentalism is reciprocal. These so-called Islamic leaders play on the anti-imperialist sentiments of the masses to expand their social, political and financial base. The massive levels of unemployment and misery give rise to large-scale lumpenisation in society. Large sections of the deprived and bewildered youth — along with some from affluent backgrounds — lapsed into this malignant religiosity in a crisis ridden society and attempted to escape into oblivion through a metaphysical catharsis, lurching back into the perceived glories of a distant past. With leftist forces in a relative decline, these desperate youth didn’t have much of a choice to address their grievances and deprivations. Hence they were reduced to ordinance for these terror machines. Religious warlords armed and trained them to carryout acts of terror, the most lucrative Mafiosi business today. With a massive influx of black capital, some ventured into politics and state institutions, suffocating and brutalising social life.

Almost everywhere, the local reactionary elites have used this fundamentalist scourge to push their own material interests, while the imperialists have never given up on this caustic instrument they reinvented in the twentieth century. They themselves also took severe damage from these fundamentalist terrorists when they turned into Frankenstein’s monsters.

In the last few years the United States (US) has manipulated social outrage in the advanced capitalist countries over the barbarous antics of ISIS. Terrorism and Islamic fundamentalism have served as a useful diversion for capitalist politicians. The idea that it constitutes a mortal threat to ‘democracy’ and ‘Western values’ is an exaggerated xenophobic claim exploited by imperialist strategists. This phenomenon suits the ruling class perfectly, enabling it to rally support, promote racism and divert attention from the real causes of the crises in society.

Nevertheless, religious fundamentalism and communalism pose a crucial danger in that they split the working class and poison the minds of the youth in revolt, from US to India. In its most virulent guise, it constitutes a variant of fascism. Fascism always drapes itself in a costume of its national myths: Mussolini’s Fascists in Caesarism and the Roman Empire; Hitler’s Nazis in Aryan Nordic sagas; Franco’s clerical fascists in the Catholic Church and the Inquisition; the Indian Shiv Sena in Hindu epics, gods and princes; and the various Islamic fascist groups (ISIS, Al-Qaeda, the Taliban etc.) in the pre-medieval despots of the Arabian desert. Successive British fascist groups have cloaked themselves in the paraphernalia of the British Empire, and their American counterparts in the folklore of the Confederate states civil war. What all fascist groups have in common is their active mobilisation of lumpen supporters, their violent bigotry against vulnerable minorities but their prime target is to drive a wedge in the class struggle.

The recommendations for the elimination of terror put forward by the NISP are obsolete strategies that have been repeated time and again by the state’s anti-terror departments. The policy document says, “A mechanism will be developed to review cases of militants who agree to cooperate with law enforcement agencies. De-radicalisation and rehabilitation programmes will be used to enable former militants to join the mainstream.” This ‘Implementation Committee’ would include amongst others, the Director General IB, Director General ISI, Provincial Chief Secretaries and all IGPs.

However this reactionary and violent social psychology mainly prevalent amongst the petit bourgeoisie cannot be removed through administrative means. It’s a socioeconomic issue, a by-product of a system in historical decay. Fundamentalist bigotry is a cancer that has metastasised into every organ of the dominant socioeconomic system, culture and its state. Only through its transformation can society be pulled out of this abyss of deprivation, bloodshed, misery and religious terror.