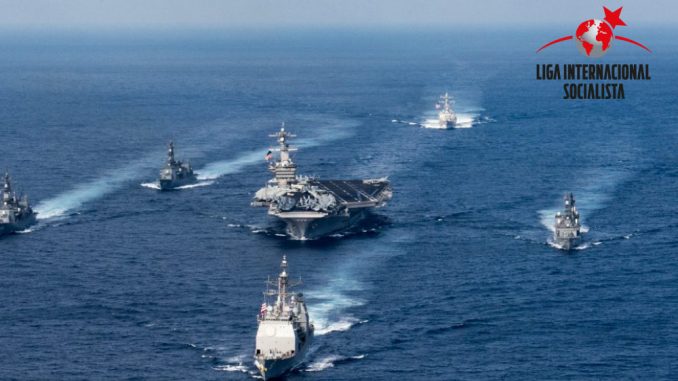 The International Socialist League (ISL) repudiates and calls on the workers and democratic peoples of the world to strongly reject the deployment of the US Navy’s Southern Command in the Caribbean ordered by Donald Trump on April 1, under the hypocritical guise of controlling drug trafficking.

This action constitutes a new escalation in US imperialist aggression against the sovereignty and health of the Venezuelan people. Since a year ago, imperialism encircles Venezuela with an economic blockade that compounds the country’s existing problems and further limits the supply of food, medicine, and other basic needs, starving and punishing the poor people in order to further their attempt to overthrow Maduro and impose the self-proclaimed president Guaidó or another puppet under its command. The consequences of the blockade have worsened since the spread of the coronavirus pandemic, which affects necessities of the health system to serve the population in particular.

Far from responding to international requests, including from the UN, to suspend the blockade because to the pandemic, the State Department released its “new plan” for Venezuela on March 31, offering to lift the blockade in exchange for Maduro turning over power to a joint coalition with the pro-US opposition, threatening with military action if its proposals are not accepted. The ISL repudiates and confronts any imperialist interference in the sovereignty of the Venezuelan people, the only ones who have the right to decide who governs their country.

The deployment of the US Navy’s Southern Command, in response to the Venezuelan government’s rejection of the State Department’s “proposal”, is particularly vile and cruel, as it seeks to take advantage of the situation generated by the coronavirus pandemic. It acquires truly criminal and genocidal characteristics, as it intends to extort the Venezuelan people when they need access medical equipment, medicines and food more than ever to face the pandemic.

With this escalation of the blockade and intervention against Venezuela, the Trump regime seeks to forcefully impose its own government in another country, once again violating all the principles of sovereignty and self-determination. We are critical of the Maduro government and the bureaucracy that has become entrenched in the State. But we only recognize the legitimate power of the Venezuelan workers people to determine their forms of government. It is solely their struggle, organization and democratic will that must decide the future of their country.

We stand in solidarity with the Venezuelan working class and people, as well as with the Venezuelan militants of the ISL, in the common fight against the Covid-19 pandemic, against imperialist interventionism and against government exploitation, misery and authoritarianism.

Withdraw the US Navy’s Southern Command from Venezuela’s coast!
Down with the imperialist blockade!
Solidarity with the workers and the people of Venezuela in their fight against the pandemic!
No more US intervention against Venezuela!