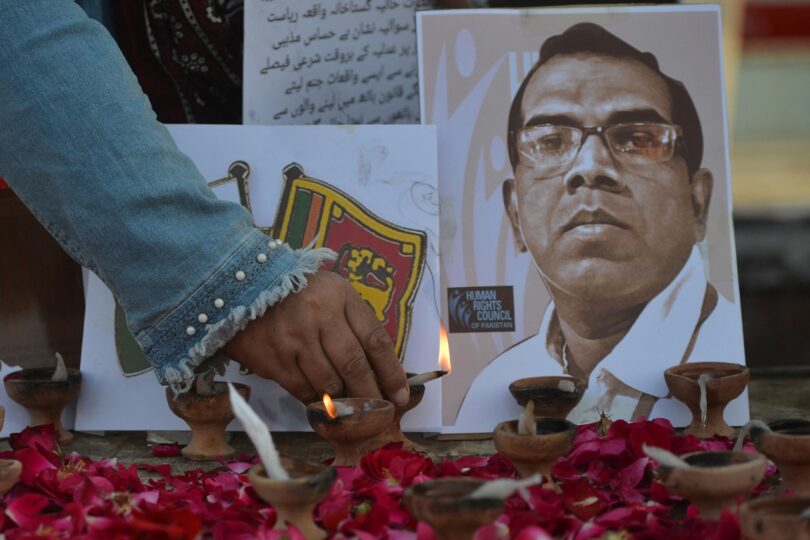 The Frankenstein monster of religious fundamentalism is ripping the South Asian Subcontinent apart. The religiously motivated lynching and pogroms have become the order of the day. On 6 December, a Muslim mob, mainly consisting of factory workers, in Sialkot lynched a Sri Lankan Hindu manager, Priyantha Kumara, of a nearby factory to death for alleged blasphemy. His dead body was then burnt to ashes. In the mean while the religiously charged mob kept raising hateful slogans and celebrating their act of lynching. It was later revealed that some workers in the factory resented the Sri Lankan manager’s strict management style. It is suggested that his strict behavior might have triggered this unfortunate incident. One can endlessly speculate about the immediate trigger of this blatant murder but on a larger picture these events reflect the utter malaise of society at this historical juncture. The historical belatedness and the utter failure of capitalism to develop these societies are taking its toll on society in general, suffocating and making the lives miserable for its inhabitants.

A similar religious frenzy has gripped India. Instances of mob lynching of innocent Muslims on the charges of beef consumption has become rampant in recent years. The Hindu rightwing goons have been let loose who roam on the streets and lynch, kill and torture religious minorities and lower caste Hindus at will. A video of a recent religious gathering has surfaced on social media plateforms in which Hindu extremists in Haridwar city of Uttarkhand state of India are calling for mass killing of Muslims in India. In another act of brazen provocation, groups of Hindu extremists have been disrupting Friday prayers in Gurgaon, just one hour from capital Delhi, by occupying the prayer ground and instead sing Hindu religious songs or throwing dung at the place. The worshipers say they have been offering prayers at the place for many years but never had faced such disruptive provocation from such goons. In the recent Christmas celebrations, the Hindu vigilantes disrupted and created ruckus in 7 Christmas events across India. Such events have become the hallmark of BJP’s almost eight years of power.

Immediately after the Sialkot incident, many people attributed the violence to former president General Zia-Ul-Haq’s Islamization drive and the nurturing of Islamic fundamentalism. This analysis is superficial to say the least. The problem runs deeper than such liberal cliché. It presumes that Pakistan was a religiously tolerant and secular society before the advent of Zia regime, and that it was his regime that promoted religious obscurantism and nurtured religious outfits. However, the poison of religiosity was already present long before Zia’s ascension to power. The same goes true for India which was and is apparently a secular nation but religious pogroms against Muslims started from early years of independence. Even the founder of nation Mohandas Gandhi was killed by a Hindu fanatic Nathuram Godse in 1948. The killer was not an individual fanatic rather he represented a group of religious fanatics capable of assassinating the head of state. The religious partition of Indian subcontinent was a foreboding of what was to come in the near future in Pakistan and India. In Pakistan the defeat of 1968-69 movement, the advent of Zia regime and the counter revolutionary Dollar Jihad in Afghanistan simply accentuated and further strengthened the already present religious extremism.

The seeds of Islamic fundamentalism were already sown with the 1947 partition of Indian subcontinent on religious lines. The 2nd Prime Minister of Pakistan, (1951-1953) Khawaja Nazimuddin once said, “I do not agree that religion is a private affair of the individual nor do I agree that in an Islamic state every citizen has identical rights, no matter what his caste, creed or faith be” (The Ahmadis and the Politics of Religious Exclusion in Pakistan, Ali Usman Qasmi, page 149). This statement reflects the reactionary mentality of the ruling class of Pakistan which continues to this day. In Pakistan, religious pogroms against Hindus started right after the independence. The major pogrom was the East Pakistan riots of 1950 in which thousands of Hindu men, woman and children were killed, maimed, raped and displaced. Villages and Hindu communities were attacked and houses burned by the police, East Pakistan ansar, East Pakistan rifles and religious goons which resulted in exodus of Hindus to India’s West Bengal. In West Pakistan, in 1953 anti-Ahmadiya pogrom left Lahore paralyzed for three months.

A similar process was going on in India too. The first major anti-Muslim riot broke out in 1969 in Gujarat which left 660 dead (mostly Muslims), 1074 injured and thousands displaced. Next year, another Hindu-Muslim riot took place in Bhiwandi, Jalgaon and Mahad leaving more than 250 people dead, several injured and properties destroyed. There is a long list of such riots which continues to this day. Of course recently the momentum of this kind of violence has increased due to the ever deepening crisis of Indian capitalism and its failure to develop society. It is also a historical fact all major anti Muslim pogroms occurred when the secular Indian National Congress was in power.

There are several causes of religious extremism in Indian subcontinent but one thing is clear that Indian subcontinent had a long history of religious harmony spanning thousands of years. The arrival of East India Company and the subsequent conquest of the subcontinent by the British Raj ended this harmony. In order to consolidate its rule, the British Raj fomented religious hatred among Indians, especially Hindus and Muslims, by every possible means. The old Roman dictum of Divide and Rule was their watchword. It was during the Company rule and subsequently British Raj that all kinds of sectarian and religious extremists began to surface. The cow protection movement started in the late nineteenth century and the first riot related to cow slaughter occurred in 1893. There had never been any blasphemy law in the subcontinent. Blasphemy law is a European concept where it had been prevalent in the dark ages. It was the British who brought it to Indian subcontinent which further instigated religious violence.

Similarly, the British deliberately stirred up such conflicts which to this day affect the political scenarios in Pakistan and India. For example, the Babri mosque controversy was intentionally fomented by a British officer Francis Buchanan who conducted a survey of Babri mosque in the early nineteenth century and claimed that the mosque was constructed over a Hindu temple. Hindu and Muslim right wing forces have been playing their dirty politics over this controversy from the last two centuries which has caused several religious riots claiming hundreds of lives.

In addition to economic and social depredations, the British colonialists distorted and rewrote the history of Indian subcontinent in such a way as to benefit their own colonial interests. History of the Indian subcontinent was portrayed in a religious light i.e. Hindu-Muslim strife. All the wars and invasions during medieval period of Indian history were described solely as conflicts between Hinduism and foreign Islamic invaders. Hindus were portrayed as the victims of Islamic forces who committed excesses against them. But the reality was far different than this mean liberal analysis. As Shashi Tharoor writes,“The facts are clear: large-scale conflicts between Hindus and Muslims (religiously defined), only began under colonial rule; many other kinds of social strife were labelled as religious due to the colonists’ Orientalist assumption that religion was the fundamental division in Indian society. There is a general consensus that it is questionable whether a totalizing Hindu or Muslim identity existed in any meaningful sense in India prior to the nineteenth century.” (Inglorious Empire: What the British did to India). The wars between Muslim rulers and other Hindu kings were quiet different from what the British later described them. For example, many Hindu kings, while fighting a Muslim ruler, had Muslim commanders and soldiers in their armies. In the same way, Muslim rulers had Hindus as their commanders and soldiers in their armies.

The British Raj cunningly portrayed the Hindu temple demolition as a desecration of Hindu religion by the Muslim rulers of the time. In fact, the temple demolition had nothing to do with faith or religious sentiments of the victorious armies. It was committed to disgrace the king and challenge his authority. There were many instances when Hindu kings demolished the temples of their rival kingdoms. Shashi Tharoor accurately depicts the fact, “But the research carried out separately by historians Cynthia Talbot and Richard M. Eaton in two different parts of India suggest that temple desecration was largely a phenomenon of the advancing frontier, occasioned by warfare and occurring mainly in the intense frenzy of armed conflict across changing territorial lines. Eaton believes that temple destruction by Turkic and other Muslim rulers throughout India occurred mainly in kingdoms in the process of being conquered; a royal temple symbolized the king’s power in Hindu political thought, and so destroying it signified that king’s utter humiliation. Talbot’s research in Andhra Pradesh at the time of Muslim expansion into the region confirms similar findings. In other words, invaders’ attacks on temples were politically, rather than religiously, motivated. The portrayal of Muslims as Islamist idol breakers, driven to destroy temples because of religious fanaticism, argue both Eaton and Talbot, is far from the truth” (Ibid). In short, the Indian subcontinent was quiet a complex society which the British tried to simply portray in religious light to prop up their criminal rule.

All these crimes of British imperialism came to a high point in 1947 when they carved the living organism of south Asian subcontinent into two separate countries on religious lines i.e. India for Hindus, Pakistan for Muslims. Hundreds of thousands of people were killed during this religious partition of subcontinent. The new ruling classes of the two countries continued the same legacy of religious conflict in their respective internal politics. Despite its secular semblance India is rapidly morphing into a Hindu Rashtra (nation). Pakistan was actually based on Islamic religiosity. This religious madness is the direct result of colonial enterprise which surgically divided the living organism of a civilization. In fact, the ruling classes of these two states rely on religious hatred for their existence and complement each other. There can’t be any semblance of religious tolerance and harmony as long as this religious partition remains intact. With ever deepening crisis of global capitalism, the ruling classes of these countries are compelled to further incite religious extremism to quell the social unrest. With every passing day, the poison of religious fundamentalism is fast becoming the only option for the ruling classes to salvage their historically doomed system of profit. The overthrow of capitalism is the only way to eliminate this religious partition which will pave the way for a society of abundance and prosperity.