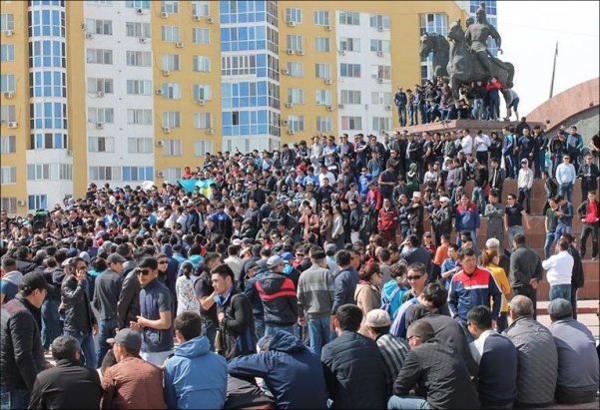 No more repression against the people!
General Strike, Workers’ Councils and Self-Defence Committees!

After the collapse of the USSR, Kazakhstan, the country richest in natural resources and territory, became the property of the family clan of the first president, Nursultan Nazarbayev.

During all these years, transnational corporations have been destroying the country’s natural resources unchecked, mercilessly destroying the environment and exploiting the Kazakh people, depriving them of a dignified future.

The dictatorship prohibited the activities of independent unions, political parties, and other democratic institutions. People are deprived of the right to choose and all the democratic rights. Peaceful protests are brutally repressed.

Political repression continues, mass layoffs, miserable wages and rising prices have led to the most powerful mobilization of Kazakh workers in the country’s history.

On January 2 of this year, in the city of Zhanaozen, where 10 years ago a peaceful demonstration of oil workers was fired upon (15 people were killed, hundreds were injured), people took to the streets demanding a stop to the rise in prices. The protests quickly spread to other large cities of the country, changed into a political format and became a real threat to the current government.

To discredit the peaceful protests and justify the use of weapons against civilians, the authorities are actively using criminal structures. The looting, robbery and provocations against the military, whose soldiers began to go over to the side of the rebels, did not provide the desired result. Then, puppet president Kasym Tokayev appealed to the governments of the countries of the Collective Security Treaty Organization (CSTO) for foreign military support to suppress the revolutionary unrest of his own people. And on January 6, military personnel from Russia, Belarus and Armenia were sent to Kazakhstan. In the “anti-terrorist operations” dozens of people were reportedly killed, hundreds injured and over 2000 arrested. The government has shut down the internet in order to cut the communication between protestors across the country.

In the present situation, there is a danger of crushing the unorganized mass movement. At the same time, there is another danger that the movement will fall under the influence of reactionary political forces. That’s why workers and working people should be vigilant. Workers have to organize general strike, workers councils and self-defence committees.

We express our solidarity with the working people of Kazakhstan in their struggle for their political and social rights!
We call on all international workers’ organizations to support the people’s protests in Kazakhstan!
Supporting the demands of the workers of Kazakhstan, we declare the inadmissibility of political repression and military intervention.
The people have the right to decide their own destiny! For a free democratic Kazakhstan! For Worker’s Republic! For Socialism!