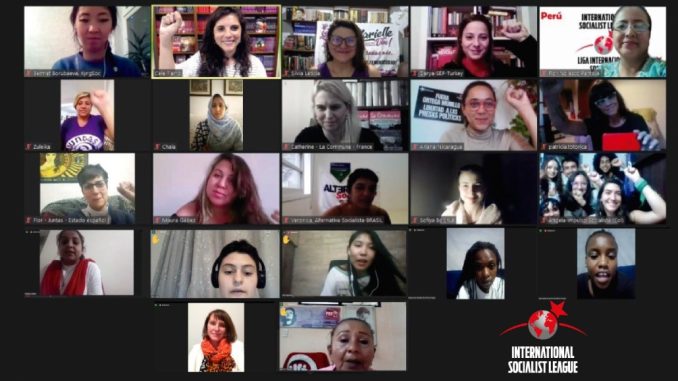 Convened by the International Socialist League, comrades from over 25 countries of all continents met online this Saturday, March 5 to prepare our intervention in the actions of March 8, International Working Women’s Day, and to continue organizing the struggle for all our rights from a revolutionary socialist perspective.

Opening statements were made by Cele Fierro from the MST-FIT Unidad of Argentina, Derya Coca from the SEP of Turkey and Rehana Akhtar of The Struggle of Pakistan.

Throughout the interventions, the international solidarity with the people of Ukraine was highlighted, especially with the women workers who resist the Russian imperialist attack. Not trusting NATO or US imperialism was stressed.

The words of Sofiya Boichuk, member of the Ukrainian Socialist League, which we transcribe here, were moving:

“The situation of women in my country continues to be unsatisfactory. We have no representation in parliament, women are underrepresented in government, although the vast majority of the population supports the inclusion of women in politics. It is worth noting that women take an active part in the life of the country, in particular, many women oppose Russian imperialism on the front lines, with weapons in their hands. Many women work in law enforcement.

Women in Ukraine face problems not so much in politics as in everyday life. Opinions about the role of women in society and the family are very conservative: the majority (including many women!) believe that a woman’s place is in the kitchen and with the children. The situation is aggravated by the relative popularity of far-right and right-wing conservative ideas. These people often exceed themselves in a reactionary way against leftist ideas, which turns into hatred towards different segments of society: people of other races and nationalities, LGBT people, women. I say this as a person who was once like that.

Neoliberal and patriotic views are much more common among women. Many comrades naively believe that the European Union and other representatives of Western imperialism will liberate us from dictatorship and oppression.

The problem is also that there is no decent alternative in our society. Unfortunately, most forces of the left are pro-Russian and shout everywhere about the threat from the West, but not a word about the atrocities of the Putin regime. In contrast, the Ukrainian Socialist League is fighting against all manifestations of imperialism, so we must carry out a lot of propaganda work.”

Afterward, Maryanne Kasina and Minoo Kyaa of the Revolutionary Socialist League of Kenya, recently incorporated to the ISL, spoke. Their words showed how we emphasize from the ISL that the struggle of the exploited and oppressed is one, regardless of the country, language or continent where we may find ourselves.

Then, Catherine Noury ​​from La Commune of France, Chaia Amhed Baba from the Union of Saharawi Youth of Western Sahara, Rim Trad from Youth for Change of Lebanon and Maura Gálvez from the Anti-Capitalist Movement of Chile intervened.

Ariana McGuarie of the Nicaraguan Anticapitalist Alternative denounced the Ortega-Murillo dictatorship and called for promoting the international campaign for the freedom of political prisoners that we are promoting in unity with other revolutionary organizations from different countries.

The event was very enriching for organizing toward this 8M, for gender rights and the LGBT movement, but above all for the struggle for a socialist world. For the construction of revolutionary parties that fight to put an end to this capitalist system, the father of all violence. That is the struggle that the International Socialist League is fighting for a world without oppression or exploitation, in which workers govern.

Here is the video of the conference: