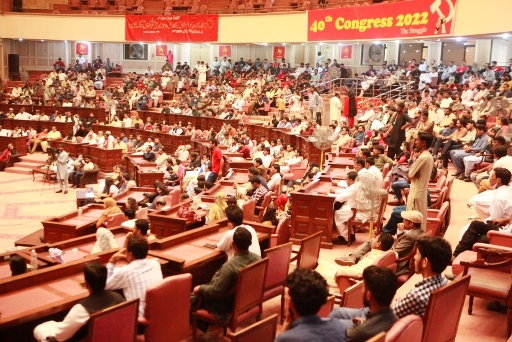 Amid the country paralyzed by the political uncertainty, chaos and panic, and severe crisis of stagflation wrecking havoc on the lives of working masses, Marxists in Pakistan move forward with their historic Congress 2022. On Saturday, March the 12th, the 40th annual Congress of The Struggle opened in Aiwan-e-Iqbal Lahore.

Political preparations for the congress had started months ago. Two draft documents, “World and Pakistan Perspectives” and “Building the Revolutionary Party” were published and discussed throughout the organization down to branch level prior to the Congress. Due to the lack of time, the second draft document on ‘Building the Revolutionary Party’ was sent and circulated in the soft version.

In addition “Lal Khan’s Selected Works” consisting of three huge volumes were also published and inaugurated at the Congress. The Congress was held in one of the most uncertain times in the recent history of Pakistan. The logistical preparations started just two weeks before the Congress because of the uncertainty regarding the permission by the authorities to hold the meeting. In times of harsh and ruthless censorship on political activity and freedom of expression, it was an uphill task to secure all the bureaucratic permissions required for holding such huge gatherings. The situation was further complicated by the pandemic. Moreover, the country is going through one of the worst economic crises in its history. The economy, going through an IMF program, is crippled with the combination of skyrocketing inflation and vast unemployment, making it extremely difficult for the comrades travelling from all corners of the vast country to afford the trip. Despite the grave socio-economic and political conditions, more than 1500 comrades, including about a hundred and fifty women, attended the Congress defeating all odds and making possible the impossible.

After a thorough pre-Congress discussion within the organization, each of the draft documents mentioned above was discussed in detail in separate sessions at the Congress. Other than the international delegates and visitors, comrades from almost every part of the country took part in the discussions and shed light on different aspects of prevailing national and international situation, global economy, perspectives, strategy and party building. Special edition of The Struggle’s Urdu fortnightly magazine ‘Tabqati Jeddojehad’ was also published.

This Congress was an important milestone in the building of forces of revolutionary Marxism in Pakistan and beyond. Comrades from many countries of Asia, Europe and Americas had sent solidarity messages and greetings to the Congress. The atmosphere was full of enthusiasm, determination and revolutionary spirit. Participation was composed of workers and active trade unionists from almost every sector of production and services. A large number of students from major educational institutions of the country were also present.

Congress 2022 formally opened with loud applauses, revolutionary slogans, anthems, poetry and music at 11 AM on 12th March in Aiwan-e-Iqbal, the biggest hall in the city. Opening remarks were given by Khalil Babar, chairman Jammu Kashmir National Students Federation (JKNSF). After that silence was observed in the memory of comrades who lost their lives during the last two years, including Amjad Shahsawar, Nathu Mal, Haider Abbas Gerdezi, Pervaiz Malik, Ahmad Warsi, Raja Fateh Khan, Mirza Tahir, Shiekh Mujeeb and others. Imran Kamyana then welcomed and introduced international delegates and visitors who had come to attend the meeting from Argentina, Spain, Turkey and Britain. Awais Qarni read selected greeting messages to the Congress. These messages were sent by Roger Silverman from Workers International Network (Britain), Maura Galvez from Anti Capitalist Movement (Chile), and Farhad Kayani and Ammar Yasir from USA representing The Struggle Overseas Region. 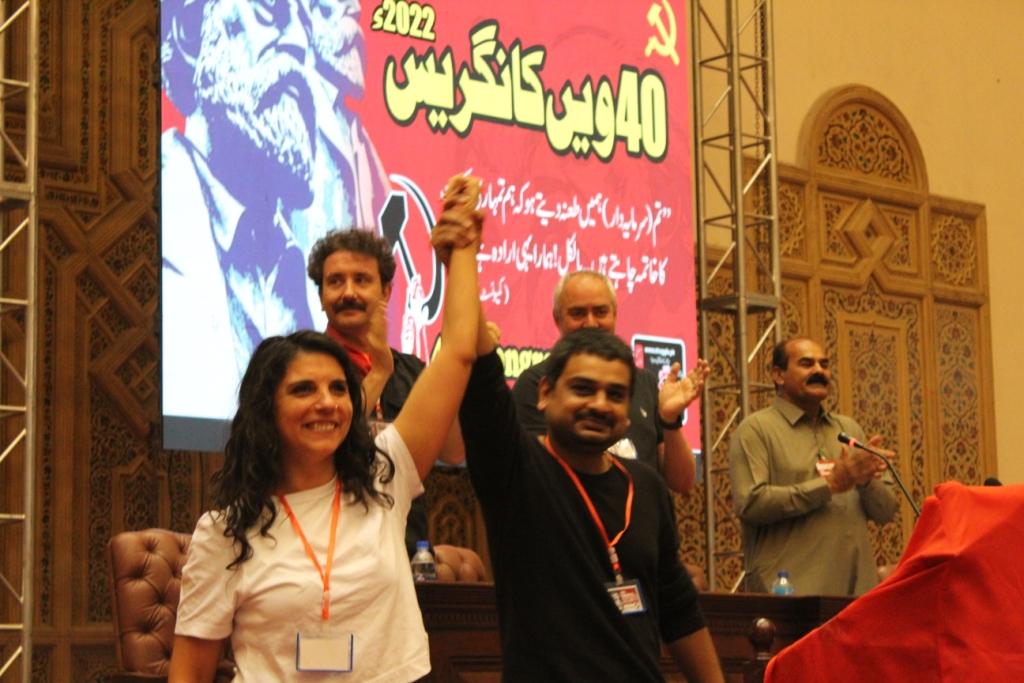 Imran Kamyana welcomed and introduced international delegates and visitors who had come to attend the meeting from Argentina, Spain, Turkey and Britain. 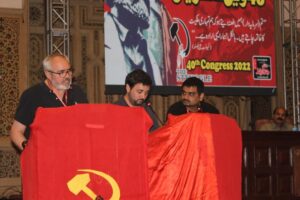 The first session on World Perspectives led by Alejandro Bodart

Two sessions on ‘World Perspectives’ and ‘Pakistan Perspective’ were respectively held on the first day. The first session on World Perspectives was chaired by Qamar Uz Zaman Khan and led by Alejandro Bodart of International Socialist League (ISL) who had travelled all the way from Spain to participate in the Congress. After lead off Rihana Akhtar and Ismat Perveen made finance appeal which was responded with great spirit of revolutionary sacrifice. Hassan Jan from Baluchistan and  V.U. Arslan from Socialist Labourers Party (SEP) Turkey contributed to the session, while Cele Fierro from Socialist Workers Movement (MST) Argentina summed up the discussion of the first session. 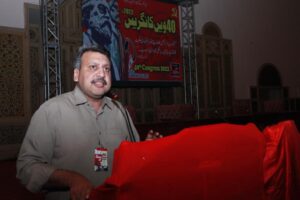 After the lunch break, the second session on ‘Pakistan Perspectives’ started, which was chaired by Saeed Khaskheli. It was led off by Zafar Ullah. A large number of delegates intervened in the discussions including Majid Memon, Wajid Khan, Esar Das, Zeeshan Shahzad, Nazar Mengal, Basharat Ali, Qamar Uz Zaman Khan and Rouf Lond. That was followed with the sum up by Zafar Ullah. Sessions of the first day were followed by commissions on trade union, women work and youth work, all of which continued till night.

Day One in Pictures

After two rich sessions full of enthusiasm and revolutionary spirit on the first day, there was a brilliant mood on the second day on March 13th in the Congress hall. The day opened with revolutionary anthems, poems and slogans. 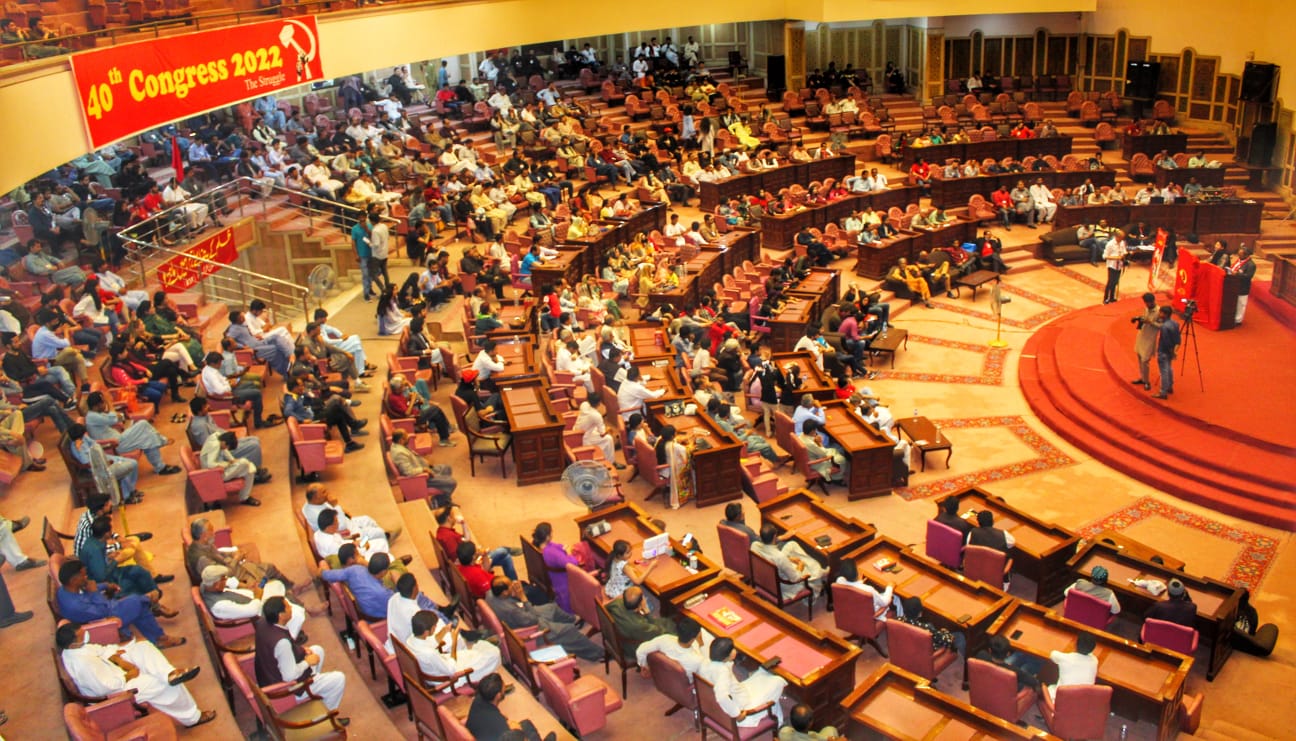 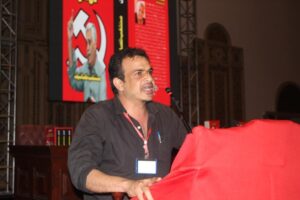 The first session of the day consisted of the inauguration ceremony of three volume “Lal Khan’s Selected Works” which was chaired by Jannat Hussain. The ceremony opened with a short video clip of Lal Khan that followed by the opening speech of Umer Rasheed. Then comrades from all parts of the country spoke on different aspects of writings of comrade Lal Khan and their  relevance and importance in present times and in the days to come. Speakers included Anwar Panwar, Haider Chugtai, Bakhtniaz, Riaz Lond, Shahbaz Pholpoto, Rahul, Farooq Tariq, Shakeela, Rouf Lond, Nazar Mengal and Rashid Shiekh. 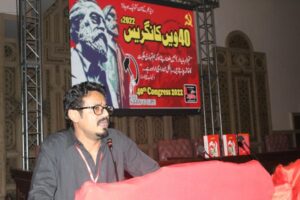 Awais Qarni led the discussion on ‘Building the Revolutionary Party’ .

After these enthusiastic and thought provoking speeches the last session of the Congress ‘Building the Revolutionary Party’ was held. It was chaired by Rouf Lond and led by Awais Qarni, in which the current situation of the organization and tasks ahead were highlighted. The lead off was followed by the lunch break.

After the lunch break the Rouf Lond announced the Central Committee slate after which brief reports of the commissions held on the previous day were presented by Umar Shahid, Khkula Bacha and Awais Qarni. This was followed by the voting on the discussions in the sessions held and the draft documents. All documents were approved unanimously. The Central Committee slate was then voted and approved. Aljendaro Bodart on behalf of International Socialist League then delivered his remarks on the Congress in which he briefly explained to the audience the marvelous experience he had had during the meeting and congratulated the comrades. 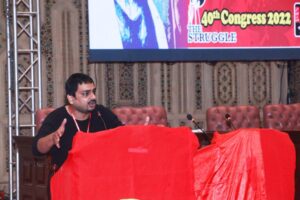 Imran Kamyana, while closing the 40th Congress of The Struggle.

Imran Kamyana, while closing the Congress declared the meeting a huge success which had proven that comrades can organize and build in most extraordinary and difficult situations. He summed up the Congress in his fiery closing remarks after which the meeting was concluded with raised fists and singing of the Internationale.

After the meeting a huge protest rally against the policies of IMF was held by Pakistan Trade Union Defence Campaign (PTUDC) which started from Aiwan e Iqbal and marched to the local press club. A large number of activists from Revolutionary Students Front (RSF) and Jammu Kashmir National Students Federation (JKNSF) also participated in the rally along with the trade unionists, workers, teachers, professors, journalists, lawyers and people from other walks of life. Khkula Bacha of RSF, Qamar Uz Zaman Khan and Nazar Mengal of PTUDC, Raza Swati from NADRA, Akbar Memon from Pakistan Steel Mills and Dr Farzana Bari of AWP addressed the demonstrators and emphasized the need of organizing and mobilizing against the policies of austerity cuts, privatization and downsizing.