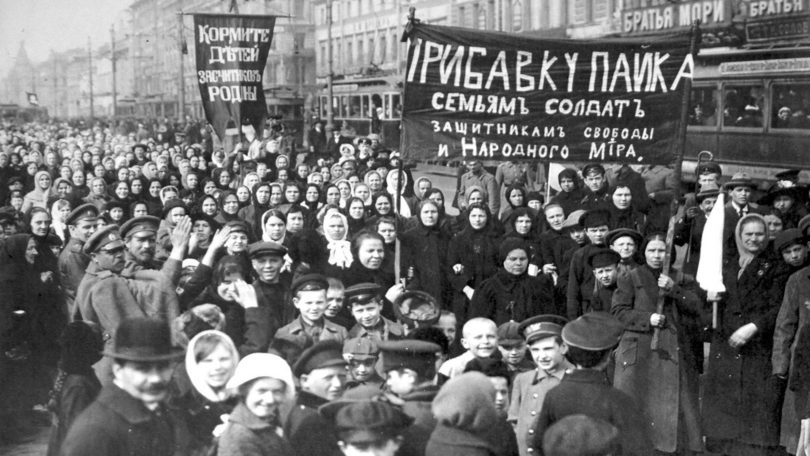 One hundred years after the October Revolution of Russia (1917), it is still one of the most influential events in the modern history of the world. The revolution began on 23rd February 1917 (according to the orthodox Byzantine calendar that prevailed in Tsarist Russia) which under the Georgian calendar was 8th March, The International Women’s Day (IWD). These mainly working class women were protesting on the streets of Petrograd (now St. Petersburg) against the imperialist First World War. Their slogan was “Bread, Peace and Land”. The protest was joined by workers and peasants and turned into a popular uprising that led to the abdication of the Tsar Nicholas II and establishment of the bourgeois-democratic Provincial Government and later ended in the complete victory of Bolsheviks in the socialist Revolution of October.

The glimpse of the socialist measures by the new Bolshevik government that were beginning to transform society that the world witnessed in the first few years of October Revolution left an everlasting impact on human consciousness. Profound changes in the economy, state and society ever in history, a short period of time became a benchmark that has been the aspiration of the oppressed women all over the world for the last one hundred years.

Russian women played a vital role in October Revolution. Female comrades worked day and night to popularize the program of Bolshevik party amongst women workers, who suffered the worst exploitation in Tsarist Russia. They were treated as second-class citizens, humiliated, beaten up, mal-treated by the misogynist state and the society. As women constituted one-third of Industrial Labour force of Russia by 1914, the Bolshevik program of equal pay for equal work with paid maternity leave and childcare facilities at factories had a great appeal to women workers. They lived in patriarchal oppression and class exploitation that determined their consciousness. Women workers understood that gender equality couldn’t be achieved in the confines of class society.

They began to join the Bolshevik Party in large numbers and played a leading role in the party, worked amongst the proletariat, the peasants, and the Red Army. The tireless efforts and courageous struggle of women revolutionaries such as Alexandra Kollontai, Clara Zetkin, Krupskaya, Stassova, Rosa Luxemburg and many others in the revolutionary movements in Russia and Europe are well documented in the history of October Revolution. Lenin, who said, “Without their support, we would not have been victorious”, also acknowledged women’s role in the revolutionary struggle.

The initial post-revolutionary period saw the unprecedented achievements of proletarian State in the socio-cultural, economic, and political arenas. Many revolutionary steps were taken to liberate women from the clutches of patriarchy and capitalist exploitation. Women’ s equal rights were constitutionally recognized. Family Code was introduced in 1918, the most progressive law that took away all male dominated privileges. Women were granted the right to abortion; maternity leave, childcare centers. Community kitchens were established to liberate women from the drudgery of domestic work. Bolshevik revolution opened up new vistas of economic opportunities for them.

However, these gains began to erode in the face of changing nature of Soviet State. The failure of world revolution, counter-revolutionary strikes within Russia and the process of bureaucratization of Soviet state put enormous pressure on the Bolshevik leadership. The Bolshevik State started to focus on preserving and consolidating the socialist revolution within the boundaries of the nation-state. This was the beginning of autocratic power of the new state during the Stalinist era. The biggest blow to women’s rights came with the Family Code of 1936 that made abortion illegal and reestablished the domesticity and the centrality of family in women’s lives. The deformation of socialist Revolution betrayed women who gave their lives to the revolution.

The history of Russian revolution shows that Women’s Question was never fully resolved within the Bolshevik party in power. There was always a conflict and tension between the certain male leaders and women comrades on issues of marriage, sexuality and articulation of private patriarchy within the arena of homes. Some leaders often reprimanded women revolutionaries such as Kollontai, Clara Zetkin, and Rosa Luxemburg for discussing “trivial” issues such as sex, sexuality, prostitution, and marriage etc. with women members of the Communist party. Lenin’s wrote about his worries of the priorities of the work at the time. In a letter to Clara Zetkin, he wrote “The record of your sins, Clara, is even worse. I have been told that at the evenings arranged for reading and discussion with working women, sex and marriage problems come first. They are said to be the main subjects of interest in your political instruction and educational work. I could not believe my ears when I hear that. The first state of proletarian dictatorship is battling with the counter-revolutionaries of the whole world. The situation in Germany itself calls for the greatest unity of all proletarian revolutionary forces so that they can repel the counter-revolution, which is pushing on. But active communist women are busy discussing sex problems and the form of marriage “past, present and future”. They consider it their most important task to enlighten working women on these questions”.

Although Marxist view family as the main source of the oppression of women. Fredrick Engels in his classical book, “Origin of the Family, Private Property, and the State “ (1884), traced the origin of the family with the domestication of animals as the first surplus in human society. He argued that the private appropriation of that surplus created the need to establish paternity of the child for the transfer of property thus the control over women’s sexuality. Engels termed this “the world historical defeat of the female sex.”

In Communist Manifesto, Marx and Engels wrote, “ The bourgeois sees in his wife a mere instrument of production. They claimed that the modern family was based entirely on capital. Because of this, the bourgeois family existed for personal gain only while the proletarian family lacked stability”.

Under a patriarchal family structure the free domestic labour of women that provide the material basis for the working class men to continue to control their lives. Female Marxist leaders highlighted the issue of women’s reproductive unpaid work in the family at the center of the analysis of gendered structures of capitalism. They highlighted the interconnection of productive and reproductive spheres in the dual system of patriarchy and capitalism.

They argued that the dichotomy of the public-private serve to use women as the reserved army of the labour. Women could be hired and fired depending on the demand of the labor market. The availability of women as cheap labour also helped the capitalists to keep the wages of male workers low.

These comrades had argued that exploitation of women’s work, both at home and at workplace creates the basis of gender inequality. Thus patriarchy is an organic part of capitalism that enhances its exploitation and repression. Therefore, Marxist analysis of capitalism needs to be complemented with the social and cultural ramifications of patriarchy.

On the centenary of October Revolution, while we celebrate the courage of both Bolshevik men and women who brought the first socialist revolution in the world, it is equally important to learn from the mistakes committed in theory and practice in the aftermath of the revolution.