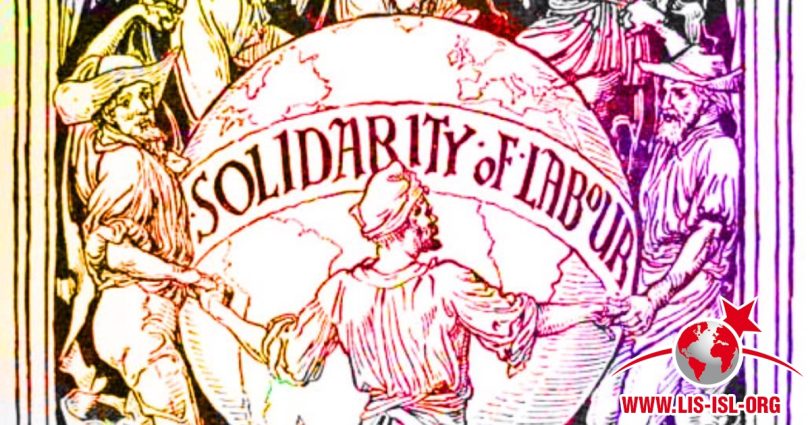 International Workers’ Day commemorates the general strike of May 1, 1886 that won the 8-hour day for a large part of the workers in the United States.

The world of 136 years ago is in many ways incomparable to today’s. However, there are undeniable parallels that speak to the continuity of the social, economic and political system, the living conditions and problems of the working classes and the struggles and challenges that workers and revolutionaries face.

Toward the end of the 19th century, the development of world capitalism began to find its limits and entered its monopolistic phase, marked by the concentration of capital in few hands and the growing dispute over surplus value that was no longer growing at rates to go around. The great robber barons rose, who concentrated economic power on a world scale, the Vanderbilts, Rockefellers, Carnegie.

And the states that backed them in the global dispute over surplus value intensified their political and military competition to control the world’s resources and markets. The escalation of that dispute would lead to armed conflict between world powers, the Spanish-American war in 1898, the Russian-Japanese war in 1905, the Balkan war in 1912 and the First World War two years later. Capitalism was entering its decadent phase, which Lenin called imperialist.

The stagnation of capitalism also triggered the first global economic crisis. In 1876 a serious financial crisis unleashed a depression in the economies of Europe and the United States that lasted until 1879. In 1885 a new world recession occurred which, as usual, the capitalists unloaded onto their workers’ backs, in the form of layoffs, wage cuts, longer working hours and more intense labour rhythms.

The working class of the late nineteenth century had developed in the heat of the massive industrialization of the previous decades, and was in the process of organizing its first large unions and its first political organizations.

It was in this context that the US labour union federation of the time launched a campaign for the eight-hour day that culminated in the general strike of May 1, 1886. 200,000 workers struck throughout the country. It is estimated that some 150,000 won the demand with the mere threat of striking and that by the end of the year some 250,000 workers had won the eight hour day.

In Chicago, one factory responded to the May 1 strike with a lockout and layoffs; a mobilization of its workers against these measures was repressed by the police, who opened fire, killing 6 workers and injuring 50. The next day, 3,000 workers marched to the city centre and were repressed again in Haymarket Square. In the midst of the repression, an explosive device was thrown and killed a police officer.

A state of siege was declared and fierce persecution was unleashed, arresting hundreds of workers who were beaten and tortured, accused of murdering the officer. Eight leaders of the movement were eventually charged and convicted in a completely rigged trial. Three of them were sentenced to prison and five to the gallows.

One of them, August Spies, declared to the court:

“if you think that by hanging us, you can stamp out the labor movement – the movement from which the downtrodden millions, the millions who toil and live in want and misery – the wage slaves – expect salvation – if this is your opinion, then hang us! Here you will tread upon a spark, but there, and there, and behind you and in front of you, and everywhere, flames will blaze up. It is a subterranean fire. You cannot put it out.”

Just over two years later, the founding congress of the Second International met in Paris and closed by voting a resolution calling for an international mobilization for the eight-hour day. It would become the first workers’ action coordinated on an international scale, and May 1 was chosen as the date to commemorate the sacrifice of the Chicago martyrs.

Three hundred thousand workers mobilized in more than a hundred cities in France, thousands more in the main industrialized countries, and many others in dozens of countries throughout the world. That the same day, Engels wrote in the preface to a new edition of the Communist Manifesto:

“(The International) is still alive and lives stronger than ever, there is no better witness than this day. Because today, as I write these lines, the European and American proletariat is reviewing its fighting forces, mobilized for the first time, mobilized as one army, under one flag, for one immediate aim: the standard eight-hour working day to be established by legal enactment, as proclaimed by the Geneva Congress of the International in 1866, and again by the Paris Workers’ Congress of 1889. And today’s spectacle will open the eyes of the capitalists and landlords of all countries to the fact that today the proletarians of all countries are united indeed.”

Today, imperialist capitalism continues its destructive exploitation of humanity and nature. It deepens the concentration of wealth and inequality. The Rockefellers of yesterday are Jeff Bezos, Elon Musk, and Bill Gates of today. Just like 130 years ago, inter-imperialist disputes over the distribution of resources and markets lead to terrible wars and potential escalation, which threatens the possibility of a catastrophic atomic world war.

This May Day, the workers and revolutionaries of the world have the responsibility and the challenge of confronting the Russian invasion and the inter-imperialist dispute in Ukraine. We must stand in solidarity with the workers and people of Ukraine who are resisting the brutal invasion and occupation of Russian imperialism; we must confront the advances of NATO and Western imperialism, support the self-determination of the Ukrainian people and mobilize around the world against all imperialisms.

Since 2008, the recurring economic crises of capitalism have turned into an irreversible systemic crisis and the pandemic has further plunged the world economy. The insistence of the bourgeoisie on resolving its crisis by increasing exploitation more and more has led to the inevitable reaction of the working class in dozens of rebellions and revolutions: the Arab Spring, the indignados in Spain and the Greek revolt; the Catalan procés for independence; the revolution of the youth and the Chilean people, Lebanon, Colombia; the yellow vests in France; the rebellion of Black people and the youth in the United States…

This May Day, the workers and revolutionaries of the world have to promote the mobilization of the world working class against the austerity plans applied by the capitalist governments of all countries and imperialist organizations like the IMF to attempt to unload their crisis on our backs. The struggle against hunger, poverty, unemployment and precariousness, oppression and the destruction of the planet depend on defeating these imperialist plans and imposing a working-class solution to the crisis of capitalism.

At the end of the 19th century, the working class was building the first industrial unions and rebuilding its political organizations after the defeat of the Paris Commune and the dissolution of the First International. Today we also have the challenge of rebuilding our union in the precarious economy, with incipient examples like the advances made by Amazon workers in the United States.