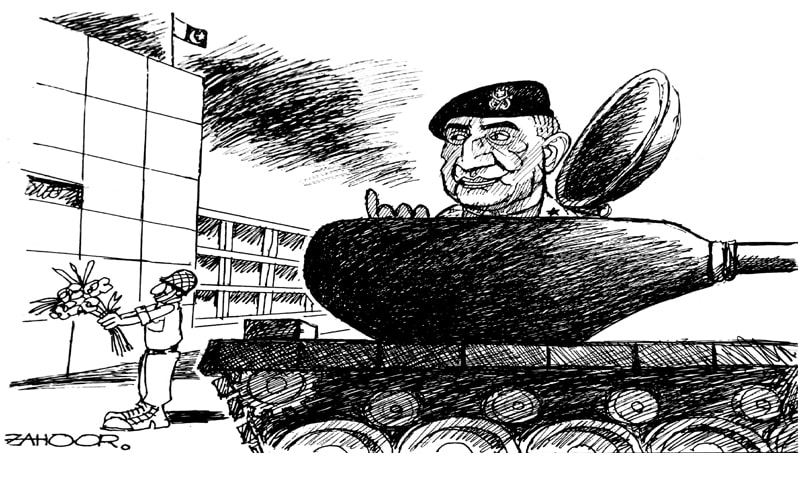 The hype given by the media to the military chief General Qamar Javed Bajwa’s ostentatious visit to the Senate along with the glee and appeasement of the vast majority of senators exposes the reality of who calls the shots behind this democratic façade. The General’s remark when a senator raised the issue of bad foreign policy pursuits from earlier years and the armed forces’ role in them, was an admission of Pakistan’s hard reality “We all made mistakes in the past. Let’s move on now.” In almost half of the country’s history, the military ruled Pakistan either directly through Martial Law regimes or through their civilian toadies with the military chiefs at the helm of these governments.

These dictatorships were sanctioned by the supreme judiciary and applauded by the elite’s intelligentsia and corporate media. During phases of civilian rule the military’s control of main policy issues and domination in governance was sometimes overt and at others covert. However, all military dictatorships were of varying intensities of repression and used even antagonistic ideologies albeit within the capitalist domain to perpetuate their despotic rule. In the past whenever the crisis unraveled into severe political conflicts the military used to step in. That now seems unlikely.

In the post-Musharraf era, the military’s intervention in the rulership has been explicit. Its stakes in private entrepreneurship in industry, landed estates and several other sectors of the economy have overwhelmed most bourgeois magnates. This increasing involvement in the economy and massive state projects has inevitably led to its enhanced role in policy making. However, the argument that military establishment has become a class in itself is fundamentally flawed. Although they have assumed a greater role as an arbiter between the feuding political outfits of the elite, this does not make them a ruling class. The bourgeoisie and imperialists also used the military regimes to intensify exploitative plunder.

But individuals from the hierarchy of the establishment do join the propertied classes with impunity. This, however, doesn’t make the state institutions a class in themselves. Military’s intervention in the economy arises from the belated, financially bankrupt and corrupt character of Pakistan’s bourgeoisie. With Bourgeois’ failure to develop a healthy capitalist economy it resorts to illegal and criminal means to sustain its social, economic and political status. For this, it needs protection and support of the state. Hence dependence on the state institutions becomes their desperate necessity. At the same time, the petit bourgeois becomes its tool to impose its moral, ethical, political and social hegemony upon society in ordinary times. Wars and revolutions rip apart this bourgeois order.

Ever since the historic elections of 1970 most polls have been without the passion, pressure or hopes of the oppressed classes. This opened up the vistas for the power brokers in manipulating the election results and forming or deposing different democratic governments. With the increase in the socioeconomic crisis, the dependence of Pakistan’s present upstart ruling class and its subservient political representatives become pawns of the state. With no real programme or faith in the masses this presently dominant politics of neoliberal economics try to get into power through the patronages of the imperialist powers, regional and international, intervening in Pakistan for their economic plunder and geostrategic designs. However, the ultimate verdicts come from the state’s institutions.

The strategic tilting of the state towards China along with Beijing’s expansionist drive in the region through investments has created a wider space for the establishment. The shift in the procurement of military hardware towards China has also added to the hegemony of the Chinese elite in Pakistan. Donald Trump’s foolhardy policies and the appeasement of Indian state for its much larger market by the last few US administrations have also propelled the military to find an alternate base of support on the international plane.

Recently the infrastructural projects under the CPEC have been contentious not only between the political ‘parties’, whose financers want to get these hefty contracts with the potential of massive profits but have also created rifts between the civilian regimes and the military contractors such as the FWO. This indulgence of the state institutions’ in businesses and project contracts was started under Zia’s despotism. The on-going rivalries and conflicts are infact rooted in these financial contradictions.

Reliance of this decadent political elite on the state is so intense that when those in opposition feel deprived of a greater share in these projects to extract huge profits they rally behind the establishment and exacerbate the military-civil contradictions. The media follows suit and those tycoons deprived of these juicy perks pour millions for a regime change.

However, in the present scenario inspite of a marginal possibility of a direct intervention, military’s control of areas with financial and strategic importance still persists. Above all they are not answerable as not being in the forefront of the rulership. Zardari’s regime was perhaps more subservient and stooped low to appease the establishment. Sharif faltered when he started to take the charade of civilian rule too seriously. But despite Sharif’s rhetoric of constitutional supremacy and democratic rule, the PML (N) being a right-wing party cannot come out with a programme to end exploitation and misery of the oppressed classes under capitalist rule. This makes his ‘resistance’ enervated. The masses find no incentives to come out for the omnipotence of the parliament, constitution etc. that have only worsened their plight.  Any movement sans mass participation cannot undo this power archetype. But when the working classes enter the arena of history to end their oppression deprivation they shall have to overthrow this moneyed politics and structures established to protect interests of capital.