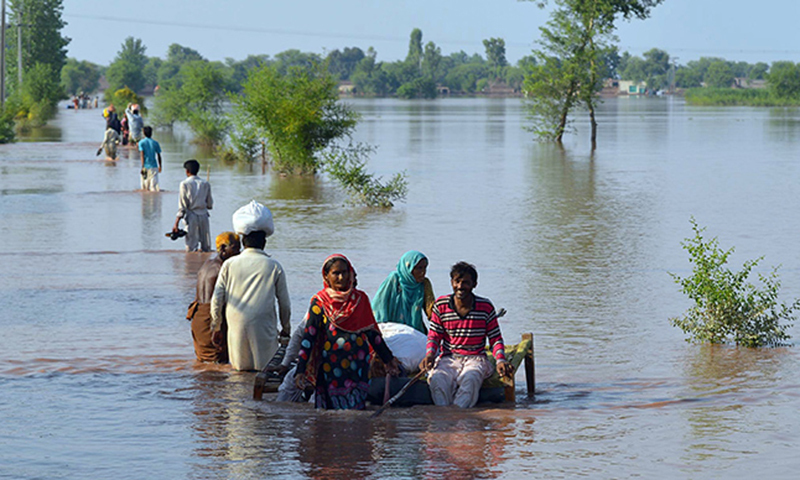 In countries like Pakistan,it has become a matter of deadly routine that every few years they are ravaged by natural calamities like rains and floods. Low lying areas with poor infrastructure are affected the most. Thousands of homes, mud shacks and other impoverished residences are destroyed. In the rural areas the livestock and all the meager belongings of the impoverished are lost and thousands of humans lose their lives. Whatever the poor families spend decades to build is lost in an instant. In the relief efforts the state is nowhere to be seen and it is mostly done by the people helping themselves. The ruling classes, their political representatives and government officials jump on the shameless bandwagon for their photo sessions with the victims. The government and its bureaucracy begin a campaign of corruption and loot in the name of helping the victims. These disasters, which are not at all “natural”, appear to be ordinary events for the callous rulers of these rotten states. But all such calamities expose the system and the rulership even further in the eyes of the masses and the working class and shake their consciousness.

Widespread flooding driven by devastating monsoons has affected 33 million in Pakistan—some 15 percent of the population. It includes some 650,000 pregnant women who are in dire need of care in flood-hit areas. Anger is growing at the government’s failure to provide timely assistance.

This monsoon season the rainfall has been nearly three times the national average of the past 30 years, most probably because of the effects of the worsening global warming that the whole world is suffering from. Pakistan’s share in the global emissions is just 1 percent, yet it has persistently been reckoned among the top 10 most affected countries due to climate change. The recent rains turning into floods are now wreaking havoc in the already impoverished regions of Southern Punjab, Sindh, Baluchistan and Khyber Pakhtunkhwa. According to the official figures more than 1000 have lost their lives including women and children. The footages emerging are painful and bone chilling. The actual death toll can be much higher and may be many folds! Still there are many parts of the country where all land transport links are disconnected, and there is a fear of huge damage to life and property. Entire towns are underwater. Baluchistan is already the poorest province in the country, where a great number of the population could only afford to live in mud shacks and other impoverished housing which have now been washed away.

In Baluchistan in the last 30 years an average 55mm of the rain fell but this year it increased 200% to 289mm. Similarly in the province of Sindh the previous average of 107mm has risen to 375mm this year. This is alarming climate change. It is an irony that the rich capitalist countries (mostly their ruling classes) are major contributors to carbon and greenhouse gas emissions, but the poor countries and the regions must pay the price. We can say that global capitalism and its lust for profits is the cause of this destruction on a global scale. On the one hand, millions of acres of forest are cut down for industrial production and profits, and there is no restriction on the production of industrial wastes and poisonous gases. On the other hand, the Military Industrial Complex worth hundreds of billions of dollars recklessly explodes its weapons in peacetime tests, wars and civil wars resulting in environmental destruction, contamination, radiation and unprecedented human suffering. All this is driving climate change to unforeseen levels.

Thanks to their dilapidated infrastructure and economies, countries of the so-called Third World get way more impacted by disasters like flooding compared to the advanced nations. For example, London gets an average of 690mm rain in a year and New York around 1139mm, yet we rarely see any loss of life and property. Due to their historical advantage with capitalism, they have been able to build a relatively better infrastructure of water management and drainage. On the other hand, in Pakistan during the period from 1961 to 2010 the average rainfall was 297mm a year and during the period from 2010 to 2020, it was 408mm. Even if we include the effects of climate change, this is a lot lower than many advanced countries. Still every few years there is huge destruction due to these rains in Pakistan. Pakistan’s belated and crippled capitalism and the ruling class was born out of submission to the British Raj. And that is the reason that when they got the opportunity of direct rule they failed in building a modern capitalist state. Due to their historical backwardness, the ruling classes of Pakistan in the last 75 years have failed to build modern planned cities or an appropriate infrastructure for water and drainage. On the contrary, the existing infrastructure is rapidly deteriorating. Human habitations have been proliferating in such an unplanned and uncontrolled way that they completely ignore the natural channels of water drainage and other fundamentals of urban planning. As a result, there are floods and destruction every few years. This is very typical of the uneven and combined nature of the chaotic and absurd development of capitalism in this region,devoid of any planning.

The recent rains and floods have yet again exposed the rotten state of capitalism and the ruling classes in Pakistan. In these conditions the already crisis ridden economy going through an IMF program and politics will decline even more and become more chaotic, but at the same time the masses will draw conclusions from the callousness of the rulers and their infighting. These lessons learned will play an important role in the mass uprisings of the future. A system suffering from its organic crisis on a global scale cannot build a healthy state and infrastructure in one of its weakest links like Pakistan. In the current capitalist system the poor will keep on suffering these “natural disasters”. Even a small relief for the masses requires a huge social and economic transformation. Similarly,to save the cities and towns from the destruction of floods, we need to put an end to the profiteering of private housing schemes, and the cities must be rebuilt under state planning catering to human needs. Instead of building housing schemes and towns on natural water channels, we need to reinforce these waterways. But this is only possible by overthrowing the criminal capitalist system and establishing a centrally planned economy, where all the commanding heights of economy are under the democratic control of the masses and all resources are utilized for social development, improvement of infrastructure and fulfilment of human needs.

Help the 33 million people devastated by floods in Pakistan…

For details regarding the activities of the Revolutionary Flood Relief and Protest Campaign please click here or follow our face book page: https://www.facebook.com/flood.campaign