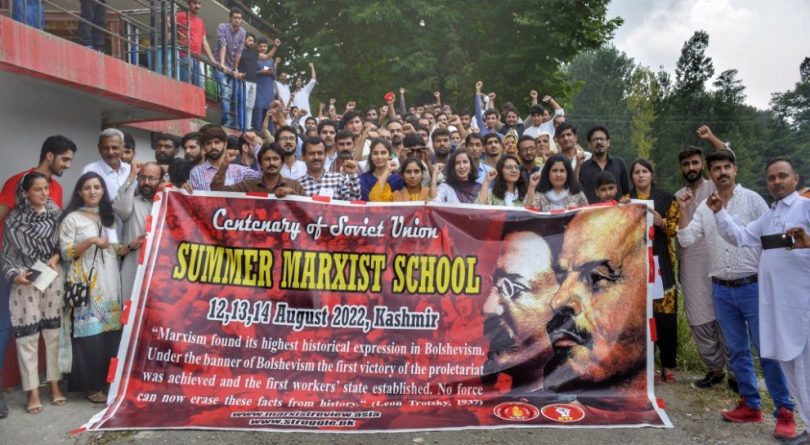 RSF (Revolutionary Students Front) and JKNSF (Jammu Kashmir National Students Federation) conducted a three day Youth Marxist School in Jammu Kashmir. This Summer 2022 Marxist School was held on 12,13 and 14th August in Rawalakot of District Poonch. More than 250 youth including women around 35, participated in this event from all across the Pakistan and Jammu Kashmir. In order to participate, comrades from across the country after traveling long journeys of miles reached at Rawalakot on the night of 11th August. 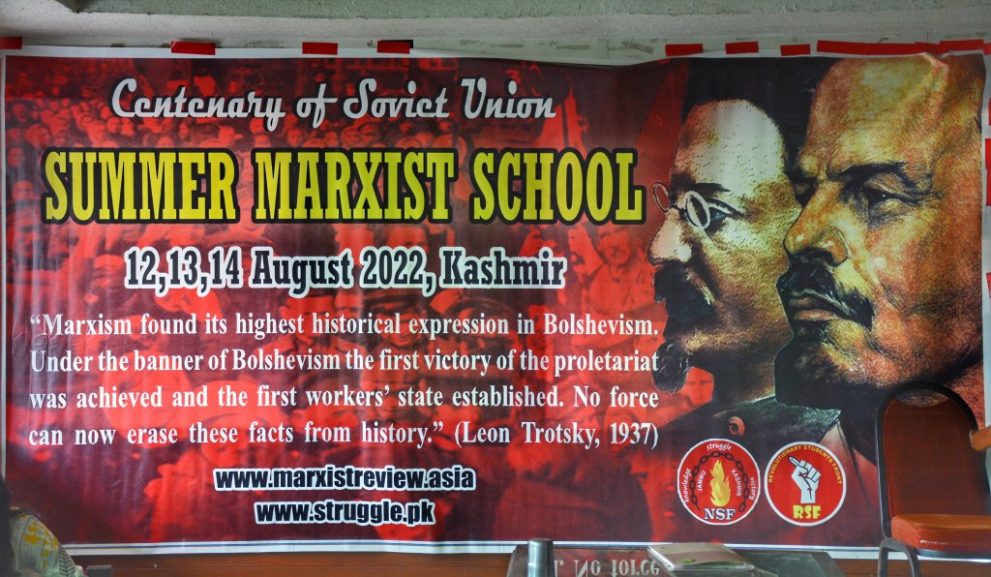 School began officially in the morning of 12th August. On the first day, two agendas were discussed. On the second day, one agenda point was discussed and a recreational trip was arranged alongside central meeting of NSF. On the third day, another single agenda point was disccused. In this way, overall four agenda points were discussed. Alongwith this, different cultural activities relating to poetry and music were also arranged. After the official opening on 12th August, Former President of JKNSF Rashid Sheikh welcomed comrades from across the country. After initial remarks, Rashid Sheikh said that hundred years ago from now, the official foundation of Soviet Union was laid in 1922 in the leadership of Lenin and Trotsky and that is why on the completion of its 100 years this school has been dedicated to the formal establishment of Soviet Union. In his initial remarks, he accoladed the comrades who left us, JKNSF’s central deputy organizers Usman Nazir and Usman Munaf and others. He shed light on their revolutionary struggle and took firm resolve to not only remember their struggle but to take it further and this school will be a step in this direction. First day’s first session’s responsibility of chairing the agenda point “Crises and Movements in the Contemporary World” was given to RSF’s Karachi’s General Secretary Hatim Khan and JKNSF University of Ponch’s Chairman Mujeeb Khan took the lead. In his lead off, he gave fruitful discussion on international economic, political, ecological and social scenario. He shed light on the effects of crisis of international economy including international proxy wars (Russia-Ukraine War), the default of weak economies, chaos, ecological crisis and movements also the Pakistan and its administered area’s economic, political and social instability, destruction by floods. He highlighted the context of different movements, their causes and possible future outcomes alongwith recent movement in Kashmir, cisis of Srilanka and situation in Afghanistan. After the lead off, Arooba Mumtaz, Nawab Chandio, Akram Misrani, Ali Turab, Abdul Rehman, Aleeza Aslam, Arslan Shani, Faiza Khan, Amir Wazir and Imran Kamyana participated in this discussion. And Khkula Bacha summed up the first agenda point by addressing the questions. After the lunch, second session “Philosophy of Marxism” began. Imran Kasi chaired the second session and Ammara Zia led the discussion. Ammara Zia in her lead off highlighted the history of philosophy, the backgorund, its need and importance and its evolution. She also highlighted components of Marxist philosophy and dialectics. After her, Beenish Kazim, Umair Rasheed, Rahul Daiser, Hatim Khan, Rehman Mani and Asif Rasheed participated in discussion. In the end after questions, Sohail Chandio summed up the session.

On 13th August, third session ” Imperialism Today” began. Abid chaired this session and RSF’s North Punjab Organizer Omer Abdullah Khan began the discussion. Omer Abdullah in his lead off discussed different stages of capitalism, monopoly, myth of free economy, colonialism, imperialism and specially capitalistic imperialism’s new and advanced forms. He highlighted the possible outcomes of different movements against imperialism. In this session, Rajesh Kumar, Masood, Anum Akhter, Luqman, Moiz Akhter, Saima Batool and Ali Turab took part in discussion. In the end, Imran Kamyana summed up the discussion and answered the questions. After lunch, comrades from across the country visited hill point with elevation of more than 9 thousand feet named Toli Peer which is situated 25 Km away from Rawalakot.

On the third day, fourth and final session of the school began. JKNSF’s Rawalpindi Branch organizer Moiz Akhter chaired the session “Tasks of Revolutionary Youth”. RSF’s Central Organizer Awais Qarni led the discussion. In this session, reports from the different regions were presented with future goals and targets. Omer Abdullah from North Punjab, Aleeza Aslam from Kashmir, Ali Turab from Central Punjab, Afzal Shar from Karachi, Suqrat from Jampur, Yasir Rasool from Lahore, Abdul Aziz from Daddu, Izhar Chaudhary from South Punjab, Namoos from Khyber Pakhtunkhuwa, Abdul Rehman from Baluchistan and Faisal Mastoi from Hyderabad presented the reports from their regions. After these reports, Saad ul hasan, Hasan Ali, Muqadas Mushtaq, Saifullah, Ali Turab, Khalil Babar and Imran Kamyana participated in open discussion. In the end Haris Qadeer from the hosting region presented the report of finances generated during school and expenditures. He congratulated comrades on successful conduct of school. In the end, Awais Qarni summed up the discussion of the agenda point and also summarized all the sessions of school and discussions which took place formally and informally. After concluding remarks, internationale was sung by comrades with the resolve to spread the revolutionary ideas in the region and across the world