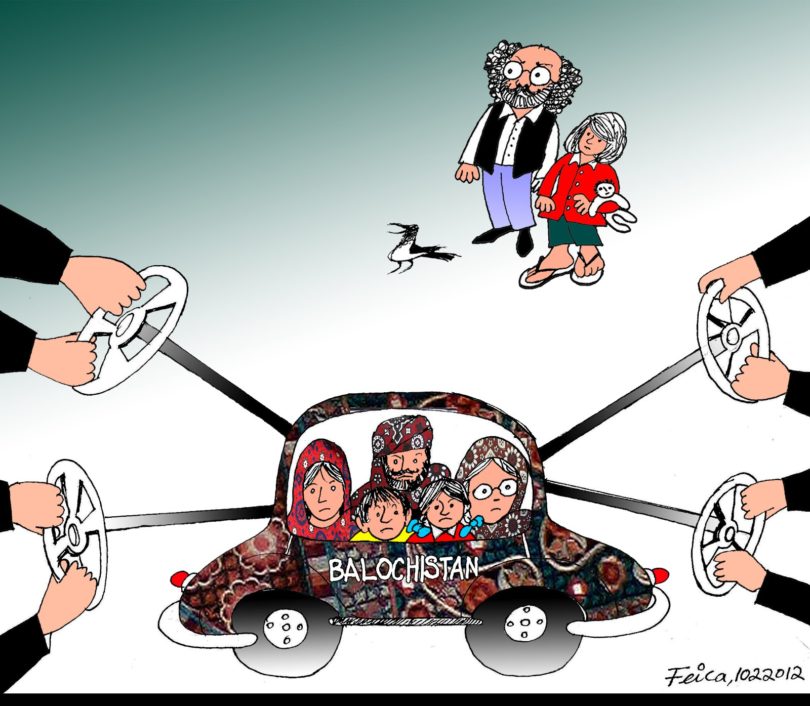 The resignation of the PML (N) lead government in Balochistan has ushered in a new political crisis in the present ‘democratic’ set-up doctored by the politicians and strategists in Islamabad and Rawalpindi. The so-called mainstream parties, PPP, miscellaneous Muslim Leagues and now the PTI have little roots in the province. Even their parliamentarians don’t take the authority of these parties’ central leaderships seriously. Balochistan status quo governments are perceived as pawns of the establishment and indulge in rampant corruption. The proclamations of Islamabad’s successive regimes of granting economic ‘privileges’ and political rights to Balochistan ended up in increased sufferings of its ordinary inhabitants. The feeling of deprivation and nationalist discrimination runs deep in society. The fall of the Zehri government is another manifestation of the discontent below leading to the unravelling of another delicately cobbled political suprastructure of tribal overlords.

Balochistan is territorially Pakistan’s largest province. It’s also the richest in precious natural resources. Its strategic location straddling Pakistan, Iran, Afghanistan and a 750-kilometre long coastline from the Arabian Sea to the Gulf of Hormuz is lucrative for military and commercial strategists. Yet Balochistan is the poorest province with excruciating poverty.

Seventy percent of people in Balochistan live in poverty. About 1.8 million children cannot attend school.Female literacy is 16 percent (versus 32 percent in the rest of the country). Compared to Pakistan’s average maternal death rate of 278 per 100,000, Balochistan’s is 785. More than15 percent of the people of Balochistan suffer from Hepatitis B or C. The droughts and the falling levels of underground water levels are making it a water scarce region and have decimated the livestock population with rural incomes having been hit the hardest.

CPEC’s is being publicised as a game-changer for Balochistan’s development. Paradoxically, despite being the home to Gwadar port, the most prized project for the Chinese investors, Balochistan’s share in CPEC’s bounty is a mere 0.5 percent.CPEC’s profits will mainly go to the corporate investors, with a smaller proportion for local contractors. Many hopes have been raised.But the nature of these projects would be capital intensive hence the prospects of major employment generation are bleak. Most jobs from the project would be based on contract labour with trifling daily wages with no employment benefits.

Natural gas was discovered at Sui in the early 1950’s, providing more than a third of Pakistan’s energy needs, yet large parts of the province are still deprived of it. Long before the CPEC investments, imperialist corporations from Canada to China had already started mineral extraction in Balochistan. Thirty-nine minerals, of the recorded 50, are now being mined in the province.

If Balochistan is the poorest province in Pakistan, Chaghi is its poorest district.Ironically Chaghi is laden with the most precious mineral deposits in Saindak and Reko Diq. The China Metallurgical Corporation started operating in Saindak since the 1990’s. Due to high copper rates then, it increased extraction exhausting these mines in just 15 years. In Reko Diq with 16 million tonnes of pure copper and 21 million ounces of gold, the story of this corporate plunder is no different. Most western and regional conglomerates aim to extract an estimated $ 1.5 trillion of Balochistan’s mineral wealth. These lucrative projects have intensified the ‘great game’ between imperialist extortionists.

The imperialists from the US to Europe and regional powers from India to China and Saudi Arabia to Iran are intervening for their own hegemonic, strategic and financial interests. However, the main interests and conflict between sections of Pakistan’s elite is in sharing the spoils from these resources.

Indian Prime Minister Narendra Modi’s remarks on Balochistan in 2016 and Indian state’s covert intervention have been injurious to the cause of youth and activists genuinely struggling for their national and socioeconomic rights. The rise of the religious sectarian terror outfits is a new phenomenon alien to the cultural and social traditions of the region. These include Jamaat al Ahrar, Lashkar-e-Jhangvi, and Jundullah carrying out genocide and cleansing of the Hazara Shia’s. The regional Islamic powers through their allies in Pakistan’s bastions of power covertly support these sectarian proxies.

National liberation struggles have been the hallmark in the region’s recent history. The principality that Baloch nationalists regard as the historic Baloch national state was that of Kalat, founded in 1638 around an oasis. The British arrived in the region in the 1830s and from 1839 to 1847 fought a fierce war with the Baloch tribes.

In 1876, the British frontier official, Sir Robert Sandeman, signed a treaty with the Khan bringing Kalat and its dependent territories under British authority. After partition in 1947, the myriad princely states of British India were voluntarily or involuntarily annexed to India or Pakistan. While the new rulers of Pakistan claimed Kalat as a part of their new state, Baloch nationalists claimed that Balochistan’s relationship with the British Empire was closer to that of the British protectorate of Nepal.

Pakistan’s reactionary ruling classes have failed to create a unified nation-state under their 70-year capitalist rule. Poverty and misery have worsened. They failed to develop regions inhabited by various nationalities evenly. With the aggravating socioeconomic crisis, the national and class oppression has worsened.

Last seven decades have witnessed many insurgencies.However, the armed conflict from 1974 to 1977 was severest with 3000 military personnel and 5000 insurgents killed. But resistance leaders such as Sher Mohammad Marri alias General Sheroff, vowed to create a socialist Balochistan leading to a revolutionary change throughout the region. However, with the fall of the Soviet Union and the capitalist restoration in China, most leaders of the nationalist movement have embraced a narrow bourgeois nationalism. The imperialists, for their vested interests, try to exploit these grievances.

But the oppressed masses of Balochistan belonging to the Baloch, Pashtun and other ethnicities can only achieve emancipation through a collective ownership and democratic control of the means of production and resources by the toiling classes. Hence in the last analysis, the national emancipation is linked to the victory of the class struggle that can actually transform the whole socio-economic and political system from private ownership to a planned socialist economy with a collective ownership of society.