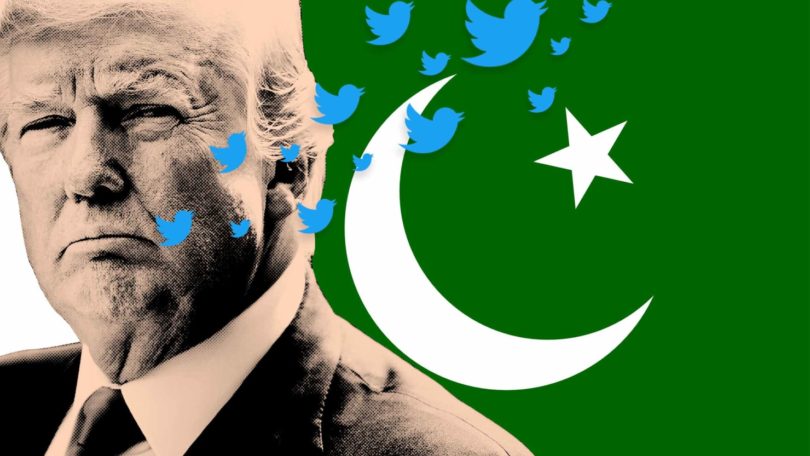 The US president Donald Trump’s first tweet of 2018 has created a furore and has further exacerbated the contradictions in the already fraught US-Pakistan relations. Trump said in his ‘new year’ message, “The United States has foolishly given Pakistan more than 33 billion dollars in aid over the last 15 years, and they have given us nothing but lies & deceit, thinking of our leaders as fools. They give safe haven to the terrorists we hunt in Afghanistan, with little help. No more!” Pakistan’s Foreign Minister Khawaja Asif responded with the statement that, “We have already told the US that we will not do more, so Trump’s ‘no more’ does not hold any importance. The White House spokesperson Sarah Sanders told reporters on Tuesday “Our goal is that we know that they can do more to stop terrorism and we want them to do that…” The State Department, Spokesperson Heather Nauert minced no words: “They need to better earn, essentially, the money that we have provided in the past in foreign military assistance, they need to show that they are sincere in their efforts to crack down on terrorists,”

Interestingly, these $33.4 billion include payments made for supporting the US mission in Afghanistan. The total economic losses that Pakistan sustained directly or indirectly since the US invasion of Kabul in October 2001 stand at $123.13 billion, according to Economic Survey of Pakistan 2016-17. The losses are $89.73 billion higher than the amount the US ‘generously’ gave to Pakistan. Despite his conflicting messages on Pakistan, President Trump has pursued a consistent policy of using US foreign assistance dollars to bully countries to fall in line with the United States. In December, he and Ambassador Nikki Haley threatened to cut off aid to countries that voted against the United States at the UN General Assembly.

A day after his belligerent tweet against Pakistan Trump tweeted another warning, this time targeting the Palestinians: “It’s not only Pakistan that we pay billions of dollars for nothing, but also many other countries, and others. As an example, we pay the Palestinians hundreds of millions of dollars a year and get no appreciation or respect. They don’t even want to negotiate a long overdue peace treaty with Israel. We have taken Jerusalem, the toughest part of the negotiation, off the table, but Israel, for that, would have had to pay more. But with the Palestinians no longer willing to talk peace, why should we make any of these massive future payments to them?”

Pakistan-US relations seem to be in for a rough ride. The present digging in of the heels by the two sides has put the already ignominious inter-relationship of an old imperial master and its tenuous client state seemingly now on a collision course. However, the Woodrow Wilson Centre in Washington, DC, cautioned, “Don’t expect a full rupture in ties, as each side benefits from some semblance of a workable relationship, but there will be dark days ahead.”

Last Tuesday the US ambassador to the UN, Nikki Haley told reporters in New York, “There are clear reasons for this. Pakistan has played a double game for years… They work with us at times, and they also harbour the terrorists that attack our troops in Afghanistan…That game is not acceptable to this administration.” This is farcical for a top US diplomat to pretend to be oblivious when the US was aware of this ‘double game’ and Pakistani state’s duplicitous counterterrorism policy long before the imperialist invasion of Afghanistan in 2001. Successive administrations despite their vociferous criticisms continued to drag along this ‘partner’ against terrorism and non –NATO allay. They not only accepted it but also certain sections of the Pentagon and CIA were complicit in fomenting this policy doctrine of ‘strategic depth’.

With Trump already being accused of stoking fires in the Middle East with his decision to move the U.S. embassy to Jerusalem, the U.S. president will now be the convenient target for any unusual hike in violence around the perpetually capricious Pak- Afghan border. In a single tweet, Trump has given a frail civilian government much needed munitions for a pretentious show of strength, and a common stage with the Army’s top brass. It has also been opportune for Pakistan’s establishment to rid itself of responsibility and exoneration of the accusations of the deep state’s involvement for nurturing terrorism. Deposed Prime Minister and leader of the ruling party Nawaz Sharif, while calling Trump Tweets “Sad” and “Non-Serious” tried to use this to retaliate against factions of the deep state and “warned the nation that if we keep on ignoring the allegations, it would be self-deception and Pakistan was divided into two parts because of this self-deception.”

Washington recently gave a warning that “Pakistan may lose territory” if the country doesn’t take appropriate actions against insurgent groups that the military commanders consider their strategic assets. Pakistan’s Senate Standing Committee on Foreign Affairs voiced concerns that the United States may conduct a unilateral raid in Pakistan similar to the one it carried out to capture and kill Osama bin Laden in 2011. But the United States’ newly adopted aggressive approach towards Pakistan is a slippery slope.  It may end up jeopardizing whatever remaining leverage Washington has over Pakistan’s state elite.

Trump, will further give the Islamicists and military generals the propaganda ammo to accuse New Delhi of interfering in Pakistan and lobbying against it with reiterating its accusations of the U.S. “speaking India’s language.” Paradoxically it will also give the draconian rule of Modi’s Hindutva despotism to whip up chauvinism. In other words, Trump’s belligerent rant on Twitter has been a gift on a platter for the reactionary forces in the region who feed upon religious and nationalist hatreds and keep scourging jingoistic rhetoric and religious pogroms to subdue and crush the toiling masses.

While this bluster like many others is not as much of Trump’s naivety but rather his wily maneuvers to ignite antagonisms in an attempt to distract the anger of US workers and youth from their woes and increasing deprivation. Similarly, Trump and Benjamin Netanyahu’s statement of sympathy and support for the Iranian workers and oppressed youth who have arisen against the repressive and coercive rule of the billionaire clergy, have been used by the Mullah aristocracy to undermine the uprising in a country where the anti-imperialist sentiment runs high. However, these aggressive diatribes and bellicose rants are also a reflection of the terminal decay of the US imperialism—the largest military and economic empire in history.

The US has lost its economic leverage to impose its hegemony and diplomatic domination of the former colonial countries. This is happening after the quarter of a century since the fall of the Soviet Union and the end of the so-called cold war, where the US was supposed to be the ‘sole’ superpower. Not anymore! For Trump’s Washington, China’s expanding economic and military might is a direct threat to U.S. global hegemony. In this regard, Pakistan has gained a new status with the country’s geostrategic location that offers Beijing an access that may lead to the success of its global infrastructure scheme—the Belt and Road Initiative (BRI). Washington has openly opposed the construction of the China-Pakistan Economic Corridor (CPEC) recently, an infrastructure scheme that may slightly revive Pakistan’s choked macro-economy. A day after Donald Trump slammed Pakistan for harbouring terrorists; State Bank of Pakistan announced that it would be replacing the dollar with the yuan for bilateral trade and investment with China. On the same day, Chinese Foreign Ministry spokesman Geng Shuang defended Pakistan’s counter-terrorism track record, saying the country “made great efforts and sacrifices for combating terrorism” and urged the international community to “fully recognize” this.

But these diplomatic rows and imperialist maneuvers only add insult to the injuries of Pakistan’s ordinary people. Their miseries have worsened with the economic as well as the physical ramifications of this internecine war. The US imperialists have used the Pakistani state and the ruling elites for its geostrategic and economic interests since 1947. But they also never let go India that had a larger market potential. Even from the point of view of Pakistan’s ruling state the Americans always dithered when the Pakistani state needed them the most, particularly during the 1965 war with India. Yet being a crooked and pauperised ruling class, Pakistan’s elite has always been servile to the American imperialists.

To crush the left wing forces that were genuinely anti-imperialist, the CIA launched modern Islamic fundamentalism in Pakistan and beyond during the 1950’s. In 1978 they launched the ‘dollar jihad’ to overthrow the left-wing government of Noor Mohammad Tarakai in Afghanistan. This started the mayhem of fundamentalist terror that has devastated the peoples of the region for generations. Now the chickens have come home to roost. These Frankenstein monsters are now at loggerheads with the imperialists and the Pakistani state’s factions that try to contain them.

Yet there are still numerous religious terrorists groups that are buoyed by the imperialists and many others are assets for the Pakistani deep state’s policy of strategic depth. With imperialists losing the war; other regional imperialist powers and Pakistan’s military strategists are trying to wrest the initiative in Afghanistan. This is an unending conflict with so many adversaries’ entering the fray. For the oppressed classes and the poor this system that breeds these conflicts of extortion only perpetuates their plight. Peace cannot be achieved with these borders of imperialist partitions and the aggressive lust for strategic and financial hegemony. Only when the masses arise to take their fate into their own hands, can these states and system be transformed and imperialist stranglehold abolished.