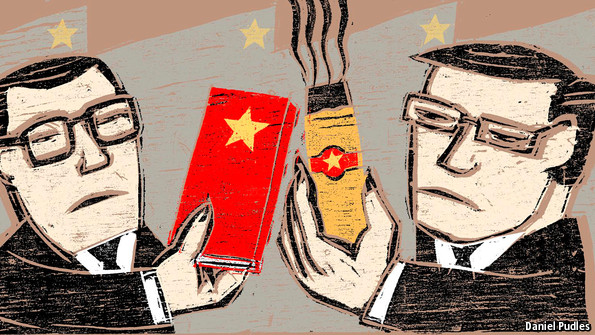 China’s meteoric rise in the last three decades is spuriously attributed to capitalist restoration. It’s a historical irony that China becoming a superpower was based on the advanced social and physical infrastructure that could only be built through a planned economy in a backward country, established by the 1949 revolution. China’s bureaucratic elite sold it out to the imperialists to enrich themselves. As Deng Xiao Peng himself put it: ‘to get rich is glorious.’

China’s counter revolutionary process of capitalist restoration started after the demise of Mao when Deng Xiao Ping took power in 1978. In the early 1960’s Mao had incarcerated Deng for advocating a capitalist discourse. With China’s economy stagnating in the 1970’s due to bureaucratic stranglehold Deng pushed for capitalism with impunity.

Private sector started to operate and special economic zones were established along China’s eastern coast for attracting imperialist investments. China was turned from a country with a planned economy opposed to capitalism to one with property rights, profits and free market competition and exploitation.

Today the Shanghai Stock Exchange is the third largest in the world by market capitalisation. Markets for goods and services dominate China. Through the price mechanism, firms buy services, raw materials and machinery from firms and sell their produce to consumers and other firms. In China, already about 95% of consumer goods’ prices are market determined. Imperialist financial institutions, including the International Monetary Fund (IMF) and World Bank, have endorsed Chinese banks.

Although the state enterprises are the lager parts of the economy, private sector has a greater input in GDP and overall productivity. The state owned enterprises (SOE’s) inspite of massive state investments and tax reliefs contribute only 30 percent of the industrial output. It is no longer a planned or a socialist economy, although the state still wields greater power through the allocation of massive state resources and iron control of economic interactions. This however does not mean that China has or can become a ‘healthy’ capitalist economy. Nor the elite can morph into classical bourgeois. Its economic rise occurred in the epoch of world capitalism’s decline.

At the October party congress Xi concentrated unprecedented power in his hands and enshrined ‘Socialism with Chinese Characteristics’ into the constitution, yet again. This is a sign of fear of the regime as the penetration of corporate capital is creating contradictions that can unravel beyond the state’s control. It’s not an accident that China is perhaps the only country that spends more on internal security than external defence.

China’s rapid economic advance in last three decades created a large petit bourgeois of almost 500 hundred million out of the total population of 1.4 billion. Apparently more people own phones and cars. Consumer goods are bought by hundreds of millions. Xi Jinping hopes they will provide an element of social stability. But with all the credit based capital investment by the state the Chinese economy tumbled from a growth rate of about 14 percent in 2007 to 6.8 percent in 2016 with little signs of any major revival.

Inspite of this economic growth and development since the late 1990’s based on imperialist, state and private investments there has been an intensification of exploitation and a growing disparity between rich and poor. Billionaires dominate the ‘communist party’. There is a yawning gap between rural and urban areas, inland and coastal. Even in urban areas many workers find it hard to afford decent accommodation, suffer long commutes and forced to work long hours. This has elicited increasing cynicism and hatred towards party’s hierarchy and regime’s officials.

China is one of the top five poorest countries in the world. Nearly 500 million Chinese live on less than $2 a day, 920 million live below five dollars a day. 85 percent of China’s poor live in rural areas, with 66 percent concentrated in the country’s western regions. There is also a simmering feeling of deprivation amongst oppressed national minorities who regard rule from Beijing as oppressive and alien, from Inner Mongolia and Tibet to Xinjiang.

Migrant workers within China’s cities are also maltreated. Rural communities are outraged about land grabs by gangster property speculators, often connected with communist party or the Peoples Liberation Army, a major stakeholder in the economy. In urban areas too prime land and property is extorted from locals. State brutality is intense. Some stubbornly, still fathom China as a ‘socialist state’.

To dissipate seething revulsion Xi Jinping started a cracked down against corruption incarcerating some high-ranking but mostly local leaders and officials. But in the last 30 years as industry developed, some 300 million people, mostly from the countryside joined the ranks of the Chinese proletariat. It is the largest migration in human history. They speak different languages; come from over 50 different nationalities and diverse cultural backgrounds. They have to live and toil in atrocious work conditions.

Before the restoration, under Mao’s so-called “iron rice bowl” system, even most villagers had open access to nurseries, kindergartens, pensions, not to mention, of course, education. Now most Chinese workers have to pay for basic health needs. With the cutthroat competition in the world markets the corporate bosses continually cut costs and keep wages down. This has increased frequency of strikes and labour struggles.

In the last few years there have been massive strike movements across the country with a greater participation every year. Tens of thousands of strikes took place, involving millions of workers this year. The bosses were forced to make serious concessions. Significant wage increases were won, in some cases of 50% or more. When workers go on strike in China they ensure that no one else does the job — by factory occupations.

As elsewhere when majority workers are back at work, concessions are reversed and leaders are arrested. In some cases protest leaders are ‘disappeared’. Nevertheless, despite repression and intimidation, confidence of the Chinese working class is growing. Today China has the largest proletariat in the world. These sporadic strikes and youth uprisings could transform into a revolutionary movement sooner rather than later. A successful socialist revolution in China, with its immense stature in the world, would have unforeseen revolutionary repercussions across the planet.