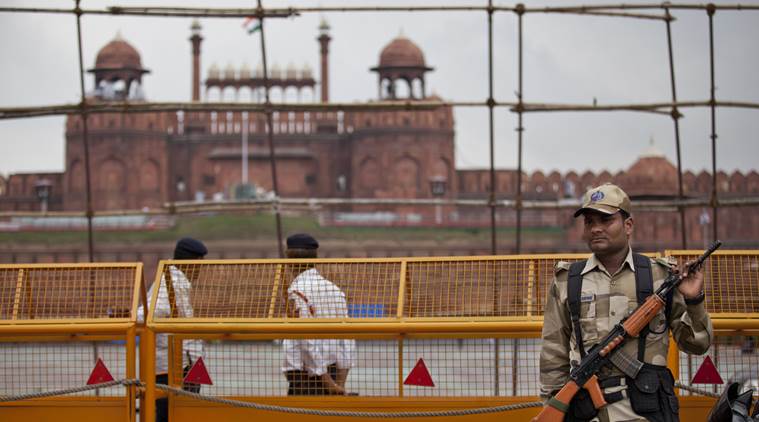 Narendra Modi’s speech at Delhi’s Red Fort on the seventieth anniversary of India’s independence and the holocaust of the bloodied partition was an insult upon injury of the youth and workers of Kashmir that are yet again fighting Indian occupation and tyranny in the seventy years of their tormenting predicament in those seven decades. In his ninety-four minute longest ever speech Modi in one of his quixotic binges ventured at bit too far: “People of Baluchistan, Gilgit and PoK (Pakistan Occupied Kashmir) have thanked me a lot in past few days, I am grateful to them,” said Modi in his Monday address. It’s a bit hard to believe for any sane person that people of Baluchistan, Gilgit and Pakistan controlled Kashmir would ever contemplate such an absurdity of thanking someone like Modi of solving their plight. One is flabbergasted at the Indian right wing corporate media and intelligentsia that bloats and flaunts a misconceived superiority complex, glorifying of Modi’s ‘independence day speech’ as a historical rebuttal.

The belligerent Indian and Pakistani bourgeois states use and abuse the national conflicts, religious, sectarian antagonisms and other regional, ethnic and communal contradictions within the different states to provoke hostilities and impose enmities amongst the masses to create a tense atmosphere to crush domestic dissent. At the same time with their imperialist designs they instigate and support separatist nationalist elites to push forward their own agenda manufactured for their economic, strategic and hegemonic interests. Their support is, in reality, a poisonous duping that can never be in the greater interests of the oppressed nationalities and the toiling classes.

The people of Baluchistan, Gilgit, Kashmir and other areas of Pakistan are struggling against the exploitation and misery of capitalist system and the state similar to the one Modi represents in India. He serves the same vested interests of finance, even more spitefully and is the real perpetrator of this exploitation, inflicted misery and oppression. Modi’s slander is a venomous assault on their struggle that they are carrying out for their basic rights of a decent human existence and liberation. Modi’s remarks an insult upon injury for the oppressed and impoverished masses of those nationalities in the struggle. Modi’s vicious remarks can only harm the cause of the peoples’ of the regions he mentioned, by getting them labelled and traitors by their repressors across the Radcliff line. In reality he is ferociously tormenting the brothers and sisters of their class in the various regions, nationalities and oppressed classes in India. Poverty, misery, extortion of human labour and oppression is more or less the same wherever capitalism exists and exploits for the rates of profit.

However, in the Indian colonised Kashmir, the revolt against the Modi regime and Indian imperialist hegemony is resiliently fighting the brutal state. Even when Modi was making that quixotic speech the police was firing live ammunition on the resurgent youth that have arisen again and again for generations against this occupation and despotic rule of the ruling elites of the subcontinent. On the so-called Independence Day, another four youth lost their lives and several were wounded in this fight against state oppression. On Tuesday in clashes between protesters and security forces another three young people defying this repression lost their lives in Magam area of central Kashmir’s Budgam district, taking the death toll in the on-going unrest in the Valley to almost 70 and thousands have been wounded and maimed, hundreds including women and children are blinded forever by the pellet guns fired on peaceful demonstrators.

Curfew remained in force for the 39th day in the entire Srinagar district and Anantnag town and restrictions were in place and life in the Valley has become abnormal and almost paralysed in this long resistance of the ordinary Kashmiri youth and population. Schools, colleges and private offices remained closed while public transport remained off the road due to the strike call and attendance in government offices was very thin. The Internet and mobile services across the Valley have remained suspended.As fate would have it, Jammu and Kashmir Chief Minister Mehbooba Mufti tried to hoist and unfurl the Indian tricolour on Independence Day, it fell off the post and flopped to the ground. A furious Mufti had to then suffer the mortification of inspecting the guard of honour and making her speech while two security guards held the Indian flag aloft in their hands. The deep embarrassment is denotative of the disarray within the coalition government of the Peoples Democratic Party (PDP) and Bharatiya Janata Party (BJP), in the aftermath of the uprising.

As fate would have it, Jammu and Kashmir Chief Minister Mehbooba Mufti tried to hoist and unfurl the Indian tricolour on Independence Day, it fell off the post and flopped to the ground. A furious Mufti had to then suffer the mortification of inspecting the guard of honour and making her speech while two security guards held the Indian flag aloft in their hands. The deep embarrassment is denotative of the disarray within the coalition government of the Peoples Democratic Party (PDP) and Bharatiya Janata Party (BJP), in the aftermath of the uprising.

The Hindu fundamentalist bigots now in power in the so-called secular India are fuming and going berserk at the resilience and the continuum of the upsurge of the oppressed masses in Kashmir. One BJP-sponsored Rajya Sabha member even went to the extent of implying that a kind of tough love by the security forces will prove beneficial for the Kashmiri people. Paradoxically the more the state repression intensifies the more fragile turn the state structures, the administration has broken down in areas and moral of the occupation forces is at its lowest ebb. In the South the situation is becoming more alarming with the constabulary abandoning a number of police stations, taking off their uniforms and sitting at home. Some of these “policemen”, in fact, have been seen joining anti-India protests, as if to prove their loyalty to the larger movement.Ajoy Gosh writes at ‘Scroll. in’,“There is a virtually little administration in several parts of the south…With the Mehbooba government virtually abdicating its responsibilities and Central forces nowhere in sight, the state seems to have gifted

Ajoy Gosh writes at ‘Scroll. in’,“There is a virtually little administration in several parts of the south…With the Mehbooba government virtually abdicating its responsibilities and Central forces nowhere in sight, the state seems to have gifted azadi to large parts of South Kashmir…In the north, which has a far greater presence of the army and para-military forces, there is a semblance of central authority, but even here the local police and civil administration are conspicuous by its absence…The Jammu and Kashmir police have virtually ceased to exist in the Valley…Ministers and legislators belonging to the PDP and the BJP dare not move around freely in the Valley anymore. Most of the BJP legislators have retreated to their homes in Jammu, while the PDP legislators are ensconced in their highly guarded official bungalows in Srinagar. Most PDP legislators, including the chief minister, are afraid to visit their constituencies. ”

Mufti herself is reported to have limited her public appearances even in Srinagar after a bitter experience a fortnight ago ─ while visiting a women’s college during an exam, parents of students booed her away. PDP ministers and legislators seem clueless on how to continue with such an unpopular government. There is virtually no consultation or communication with their BJP counterparts and the hostility between the two is palpable. The chief minister meanwhile is reportedly in a state of emotional distress, according to her close insiders. The 20-month-old PDP-BJP government has grown shakier with every passing month, is now near to an implosion. Besides, the regime’s dramatic loss of public support and control over the administration in the Valley has reduced the entire purpose of having an elected government to a farce. The uprising of 2016 is strikingly different from the 1990s in more than one way. A new generation of Kashmiris in the forefront is more defiant and daring. The confidence and courage seems recent. This new generation of youth in Kashmir links the socioeconomic liberation with the national liberation. The kind of aspirations these youth have cannot be materialised in any of the rotting capitalist states of the subcontinent. Hence the on-going magnificent struggle and tremendous sacrifices of the people are having a huge impact on the beleaguered and oppressed masses of the whole region. Particularly amongst the youth, it’s a source of inspiration and strength. This upsurge in Kashmir can at a not far off stage catalyse a mass inferno of class struggle with the youth in the initial vanguard. The wound that the British had inflicted on the body politic of this ancient civilisation with partition and conflict in Kashmir to continue imperialist plunder and capitalist coercion can paradoxically turnout to be the nemesis of imperialist stranglehold and the atrocious rule of the native reactionary ruling classes.

The much-glorified Modi’s BJP regime is flailing on Kashmir. Modi’s vulgar and slanderous rhetoric about Baluchistan etc. wouldn’t help him even a bit. The ordinary people of Baluchistan, Gilgit and Pakistan controlled Kashmir as elsewhere in the region are fighting for their emancipation from this tyranny of class and state oppression. Narendra Modi represents an ideology and system that is the cause of the agony and devastation of the masses regions. They do not have to thank Modi instead his is also directly or indirectly responsible for the atrocities that are being perpetrated against these oppressed peoples. In fact,  they have to support and encourage their class brothers in India to overthrow and annihilate him and his system.  The people of Pakistan neither those of India can even get a respite within the confines of the existent capitalism in both countries. To put an end to poverty, misery, disease, terrorism, wars, bloodshed and deprivation the oppressed classes of the South Asian subcontinent have a collective battle to fight and the class war to win.