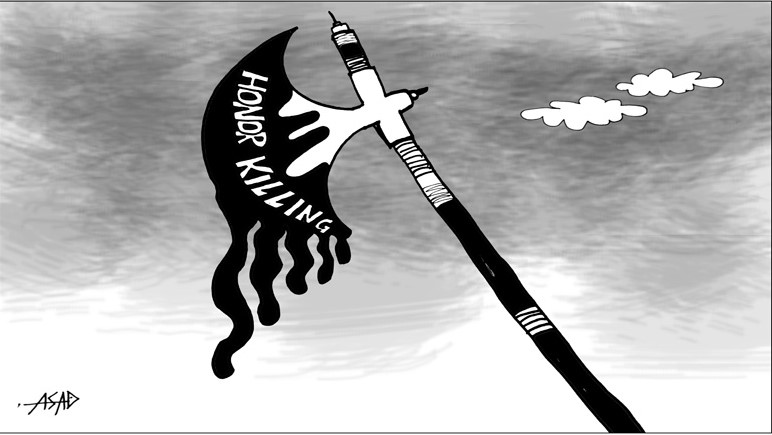 On 14th August, the seventieth anniversary of Pakistan’s ‘independence’, two teenage lovers, 15-year-old Bakht Taj and 17-year-old Ghani Rehman, eloped their homes to get married without the consent of their families. But were soon tracked down by their relatives. Terrified of fierce retribution from the reactionary tribal community in which they were besieged Rehman’s father, Afzal, visited Taj’s house to meet her father, Hikmat and extended a marriage proposal and offered another archaic tribal practice, Swara (offering girls of the family for marriage), to pacify Taj’s parents. Taj’s family accepted Afzal’s offer.

However, a Jirga of over a dozen elders and Mullahs of the Mohmand tribe residing in Karachi’s grimy shantytown, Ali Brohi Goth, gathered on August 15 to conclude the matter. The head Sartaj Khan alias ‘Shagalai’, rejected the families’ agreement and prevailed upon the Jirga for punishing the two teenagers by their families killing their own children, ‘to save their and the tribe’s honour’. Allegedly, the father and uncle of the girl drugged and tied them to a cot and repeatedly gave electric shocks until she was dead. The boy suffered the same fate a few hours later. Their bodies were buried in the dark of night. There was no mourning, no last rites and no prayers for the departed.

After the crime was revealed the bodies of the deceased were exhumed on Wednesday, September 13th; a forensic analysis found that they bore signs of electrocution and torture. It has been reported that Rehman’s father, Afzal, had opposed the decision but, according to his relatives, one of the Jirga members threatened to have his family in his hometown destroyed by the Taliban terrorists if they did not comply.

This savagery of the crime of honour killing is escalating as the social decay exacerbates with the burgeoning deprivation and misery. The states failure and the callousness of the ruling elites are laid bare by their oblivious attitude towards this harrowing brutality. Violence against women from the oppressed classes is shockingly rampant. These heinous killings took place not in the wilderness of rugged tribal wastelands, but in the bustling and ‘modern’ metropolis of Pakistan’s most industrialised and largest city Karachi.

This phenomenon of primitiveness in a ‘modern’ city is the product of a peculiar pattern of the socioeconomic development of Pakistan’s capitalism. Above all, it illustrates the failure of the state and system to absorb the massive urban migration to the metropolitan centres. Since the 1950’s a relatively extensive industrialisation and investments from western imperialist monopolies were spinoff effects of the post-war boom in the advanced capitalist countries that lasted till the mid-1970’s. Karachi, to some extent Hyderabad, Lyallpur, Lahore and some other industrial hubs expanded rapidly. So did the populations of these cities with a massive influx of migrant labour from far-flung areas of the country. Pakistan’s growth rates reached a nine percent peak in the late 1960’s.

However, the rapid economic growth left behind by far the development of social infrastructure for placement of the increasing population. This pattern of uneven development created new contradictions that exploded with a mass revolt of the late sixties in which this virgin proletariat played a revolutionary role in the industrial and political struggles of the time. These communities were united on a class basis and the nationalistic, lingual, religious, sectarian and communal prejudices diminished as compared to today’s Karachi that is being ripped apart by these venomous biases. During the early seventies, the centre of the proletarian struggles was Karachi’s Pathan colony where most of the Pashtoon workers and their families resided.

Ever since the decline of the class struggle and the infringement in politics and society by the deep state these mediaeval prejudices were whipped up. Religious and sectarian tendencies were perpetrated by the vested interests to divide the workers to secure their profits and exploitation. Zia ul Haq’s vicious dictatorship imposed a black reaction by propping up communal and sectarian bigotries. The democratic regimes that followed continued his policies arraying religious stances and nationalistic politics as their voting base. The masses’ traditional political parties and most trade union leadership abandoned the class struggle. With the deterioration of the economic crisis, the industrial profitability depended more and more on crime and extortion. Religious, narrow nationalist, communalist and sectarian vigilante gangs manoeuvred Karachi’s economy and businesses. They also dominate politics and the media.

With the rising unemployment and decreasing incomes lives of ordinary workers became miserable. With the unions and class struggle on decline they felt a social, cultural and economic alienation. Such conditions of social isolation forced these migrant workers to revert back into the sheaths of their narrow communities and religious sects. The wealthy in these communities dominated the ordinary people in this caste or community-based neighbourhoods using inhabitants for financial and political bargaining. They imposed conservative social and culture orthodoxies threating these enclaves as their fiefdoms. Those who are responsible for the callous murders of these teenage kids are precisely these mafia dons.

This pattern of socioeconomic development in Pakistan is aptly explained by the Marxist theory of ‘combined and uneven development’ developed in particular by Leon Trotsky. A backward country like Pakistan would adopt parts of the culture of a more advanced society and culture. It could also adopt or merge with parts of a more primitive culture with sometimes positive and at others negative effects. The negative impacts are these cultural and moral degradation in the shape of honour killings etc. But cultural practices, institutions, traditions and social lives belonging to different epochs of human history are also combined, juxtaposed and linked together in a rather unusual way in Pakistan’s society. The caricatured modernity of this capitalism has mingled with primitive and reactionary traditions rather than eliminating them.

The acutely diseased condition of this cultural and socioeconomic order is evident in symptoms’ such as these harrowing murders in Karachi. No change in laws or administrative means can eradicate these social ills. Karachi shall have to rise again. The resurgent class struggle in this bastion of Pakistan’s proletariat, if victorious can uproot the real causes of these vile reactionaries that are pushing society into an abyss of barbarism.