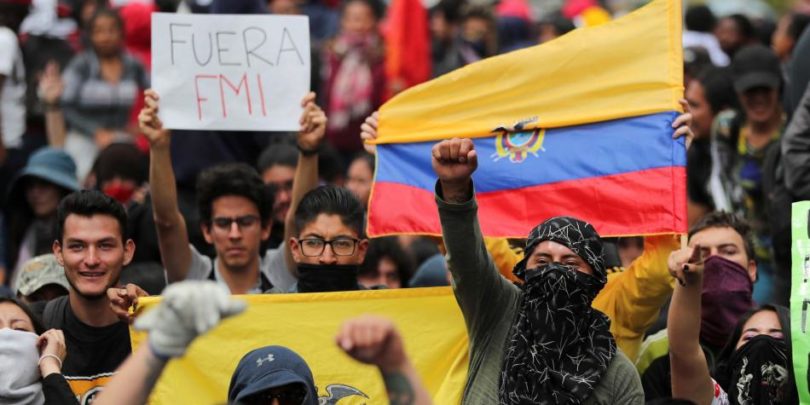 The Mobilization Does Not Stop

One week after the measures announced by Lenin Moreno’s Government, the Ecuadorian people continue mobilizing, paralyzing the country to oppose the measures imposed by the IMF that require the elimination of fuel subsidies among other demands, to once again make the people pay for the crisis. The increase of the liter of gasoline from US $ 1.83 to US $ 2.35 suggests an immediate increase in public transport cost and a consequential increase in inflation, with the devastating consequences that always causes in people’s lives.

Despite the “exceptional measures” taken by Lenin Moreno and that the transport bosses announced the end of their strike, the response on the street is the massive march of thousands of indigenous people from the central highlands to the capital, which will join with peasants from the coast, workers, students, and people in general, who take spontaneous actions in the country’s main cities, calling for the resignation of Moreno and the repeal of Decree 803, through which the fuel subsidy was withdrawn.

A Government Enslaved to the IMF Slave

Lenin Moreno´s government is so eroded that 92 out of 100 Ecuadorians consider its management bad or very bad. Despite taking office with a program that proposed maintaining social conquests, it was dedicated from its first day to distorting the will of the people by turning over the management of the economy to businessmen and financial speculators, who reduced the capital outflow tax by 50%, which affected agricultural production with the opening of imports of agricultural products, braking the national production of rice, corn and dairy products. These are now distributed in the country with labels of milk or cheese-flavored dairy products. Once again, Lenin Moreno, former successor of Correa, ends the experience of another so-called “national and popular” government, by making the people pay for the crisis, adding his to the long list of governments of that type: the Kirchners in Argentina, Ortega in Nicaragua, or the PT in Brazil. Governments that generated natural expectations of solutions that were unfailingly betrayed by these leaderships, who, on the one hand are called progressive, and on the other always end up agreeing to and applying the programs imposed on them by the imperialist international organizations.

A Revolution in Progress

In this case, the Lenin Moreno government tried to take refuge in Guayaquil, where the bosses’ chambers, the bankers and the big businessmen show their support for the government and their agreement with the IMF by calling the mobilized people “slackers”. In response to such a statement thousands of people present themselves with “I am a slacker” posters on social networks and in the streets that are read and heard massively. Guayaquil today also succumbs to the popular fury and the city recorded about 70 business lootings of various kinds, forcing Moreno to lock himself in the Salinas military base from where he tries to govern at this time.
The calls to guarantee the continuity of the total blockage of the roads, the siege of the government palace and the local governments are redoubled throughout the country, the “cacerolazos” multiply and numerous peasant organizations continue to march towards Quito.

A new call of the National Citizen Assembly has also been announced, which brings together leftist organizations, combative unions and peasant and student organizations and proposes to revoke the government’s mandate, repeal the austerity package and break with the IMF, ignoring all agreements that Lenin Moreno may have made. But an alternative economic plan and the call for early elections are also promoted.

The stories and documents that our fellow Ecuadorians that participate in the struggle send us, what we read in the international media and the thousands of examples reproduced on social media, allow us to define that Ecuador is living a true revolution, so regardless of its scope and development, nothing will remain as it was in the country.

From the ISL we accompany our comrades and greet all the struggle´s initiatives because we understand that the crisis that Ecuador is living as a result of the IMF’s impositions, begin to be the norm throughout Latin America, in Ecuador, Argentina, Brazil, Haiti, Puerto Rico, Guatemala etc. Popular mobilizations question not only the sitting government, but the totality of the institutions of the regime, so it is essential to call for a Constituent Assembly that freely debates how to give the country a new organization.

These are decisive hours that will define the future of Ecuador, the advance of the mobilization and its necessary organization may forge an alternative that opposes not only Lenin Moreno but any of the bourgeois variants that will start propose themselves to try to stop and deviate the basic objectives that the people demand, because in Ecuador as in the whole world, everything must be turned around, so that those who have never ruled -workers, peasants and the people- govern once and for all.

Yesterday, Lenin Moreno announced on national radio and television broadcast, that he had decided to move the government’s headquarters to the city of Guayaquil, given the impossibility of continuing working from the Ecuadorian’s capital.

It is necessary to highlight that, unlike other popular uprisings carried out in Ecuador, which achieved the overthrow of the governments of Abdala Bucarán 1996, Yamil Mahuad 2000 and Lucio Gutiérrez 2005, with mobilizations centered in the city of Quito, the national political center, while protests were very weak in the rest of the country.

The current popular uprising registers a generalized protest with similar strength in almost all the provinces of the country, making it clear that the repudiation of the current government is widespread throughout Ecuador.

However, unlike other occasions, the national oligarchy, the army, and the media have closed ranks around Moreno, which is why, despite the intensity of popular discontent, the government still holds on.

What is the origin of this institutional crisis, which has weakened the regime and brought us back to the conditions of institutional fragility of more than a decade ago (1996-2006 where there were 10 presidents in 10 years, three governments were overthrown, and the lowest qualification of the regime)? This institutional crisis of the constituted power dates back to that dark decade in Ecuadorian politics, accompanied by the strong democratic deconstruction that began in 2007 with the inauguration of Correa that allowed the mass movement to advance in the Constituent Assembly, which built in Montecristi, the land of Gral. Alfaro, a series of advances that weakened the old state structure, which had weakened labor relations, outsourced work, deregulated labor legislation, privatized public companies, and established an economic reform which placed the country in the hands of financial speculators and parasites of all kinds.

This new constitution and the mobilization of the population allowed advances in the economy, increased the income collection system and improved oil royalty revenues. External indebtedness was eliminated to finance current expenditure, and income from exports was used for infrastructure investment in general, changing the face of the country with improvements in the road structure, in schools, hospitals, universities, and an aggressive program for the so-called change of the productive matrix, by sending thousands of young people to study in scientific centers around the world. All this during the international situation that, in the heat of the increase in the price of raw materials, allowed the bourgeoisie, not without resistance, to yield a minimum part of the monumental profits they obtained during the first decade of the 2000s.

By the end of his term and as the economic “summer” was ending due to the imperialist crisis of 2008, the Correa Government itself began to decrease public works spending and ended up nominating his former trusted man and current president Lenin Moreno as his successor.

In two years, Moreno dismantled absolutely everything, causing a regime crisis that has generated the accumulation of unprecedented anger in the population. The conditions that originated the Constituent Assembly of 2007, have been raised again and the country is preparing to recover the labor conquests and the dynamics of the economy that Moreno destroyed rapidly.

The fall of the government is a matter of time because, in addition to poor political performance, there is a government with few intellectual lights. In the face of discontent among the population, Lenin Moreno acts just like the backward governments of past decades. He blames the current crisis on Correa, who nominated Lenin Moreno himself.