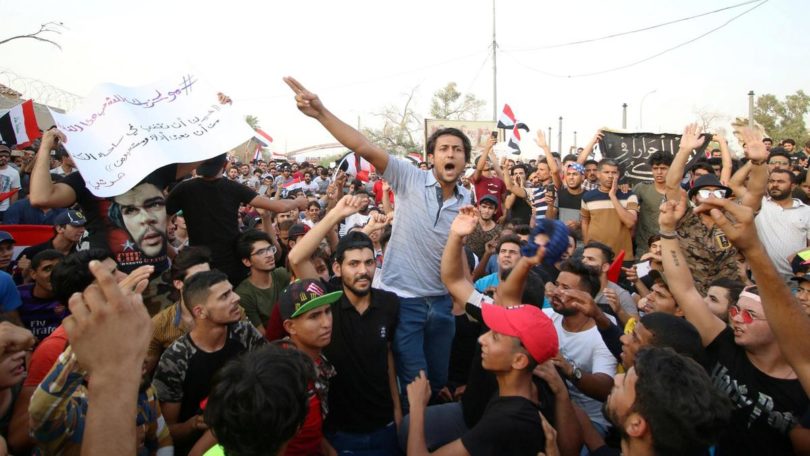 In the Middle East, the streets are heating up again. After protests against Sisi in Egypt last week, the streets are on the heat in Iraq that still carries the destruction of the war for more than a decade.

Social and political instability in Iraq is reflected in the mobilizations of the workers this time. On October 1st, 3000 people in the capital, Baghdad, are involved in the protests against unemployment, corruption and public services problems. Protestors wanted to march the Green Zone, where the government buildings and embassies have been closed to the public since 2003. Police used real bullets and caused 44 deaths. On Wednesday, In Baghdad, Nasiriyah, Najaf, Basra and many other cities, the people took to the streets. Until now, more than 100 have been killed and hundreds were injured in clashes. Curfew was declared in Baghdad, Nasiriyah, Amara and Hilla for days. The government tries to prevent demonstrations and its propagations by using intense violence and limiting social media. The heart of Baghdad protests is Sadr and El Amal that have majority working class population.

The Iraqi people have been in the middle of the imperialist rivalry between the US and Iran that accumulated the problems like poverty and unemployment for millions. The current protests show that the Iraqi people want a permanent change in Iraq, whose economic and political structure was destroyed by the war and was given in the hands of corrupt politicians after the war. The main reasons of the protests are unemployment, corruption, problems in public services, a dramatic increase in kidnapping and torture cases, endless political incapabilities of the bourgeois parties, and Iranian influence on Iraqi politics. A demonstrator named Mushtaq Radhi Salih sums up his views as follows:

“There is corruption; but no electricity, water and service for 14 years! We don’t want political parties; we don’t want anything from them. Just give us a country; we just want a country where we can live!”

In addition, last week, Prime Minister Adel Abdul-Mahdi dismissed Major General Abdul-Wahab al-Saadi, the Commander of Counterterrorism Units, who stands forward in the fight against ISIS. This caused a public response. The dismissal was seen as a disturbance among the Iraqi ruling elites.

Protests are not new in Iraq. Last year, the people took the streets and forced the government to resign because of the power cuts when Iraq had an extremely high-temperature. Abdulmahdi government came to power after this process. However, despite the huge oil revenues of the country, the poverty and unemployment cannot be solved. Like its predecessors, corruption of Abdulmahdi government brought about massive unpopularity. Following the political crisis that erupted last year, Mahdi came to the forefront as a figure in which the ethnic and religious elements of the country agreed on and he has been floating between two imperialist camps. Yet, the resignation of the government is the primary demand of the protesters.

The lion’s share of the Iraqi budget constitutes security expenditures that also reflects the instability of the country. While approximately $106 billion spent on security in 2019 (corresponds 19% of the budget), 8% of the budget was allocated for education, health and infrastructure. In addition, 2% of the budget is transferred to the paramilitary forces that have become part of the state. In Iraq, the masses expect the government to increase social expenditures by reducing security expenditures. The government does not have a solution to unemployment, which rose to 13% as of 2017 and to 25.6% among the youth. Besides, the partisan relationship in the employment in the public sector attracts reaction of the poor masses.

The demonstrations do not have leadership. As one of the most important constituents of society in Iraq, the Shiite leader Muqtada al-Sadr and the Iraqi Communist Party announced that they would not participate in the protests. Similarly, protesters avoid any political identity because of the fragile ethnic and religious structure in Iraq. In the Middle East, the people have the bitter experience of the identity conflicts and they have seen how it brought the destruction in Syria. Therefore, the masses in Iraq do not want to pave the way for such identity conflicts. Ayatollah Ali al-Sistani, the religious leader of Iraqi Shiites, supported the protesters and called on the government to stop the violence and listen to the demands before it was too late.

The masses that spontaneously spill into the streets in Iraq reveal the level of the accumulated anger in society. In 2010, against power outages in Basra, Nasiriyah, Karbala, Küf, Kut and Baghdad rebellion and Friday of Anger on 25 February 2011, in a sense, reflected the Arab Spring that began in Egypt and Tunisia. Again, in 2015 and last year, the masses took to the streets with almost the same demands. The Sadr Movement had a serious impact on all these processes. But this time protests take place in the cities from different sociological character. It is not only the southern cities where under the influence of Shiism but also Baquba, who has remained silent so far, and small cities like Kirkuk and Tikrit. After Saddam, Sunni population, who feel excluded from Iraqi politics, recently played a role in the strengthening of ISIS. However, the spread of the protests to the areas include a large number of Sunni population, even Tikrit, which is the hometown of Saddam, reveals that the exploited sections of the society are looking for a new way.

Another reason for the anger of the masses is the fact that poverty is increasing despite the increasing oil revenues. The oil production and trade in Iraq has reached historical levels in the last 2 years since the victory from the war against ISIS but all the wealth seized by a handful of ruling elites and warlords. To stop such a widespread wave of protest does not seem possible for the government of Abdul Mahdi, who has already a weak power. For a long time, Iraq has become a pie that cannot be shared between the US and Iran. This leads to extra tension on the war-torn Iraqi society. 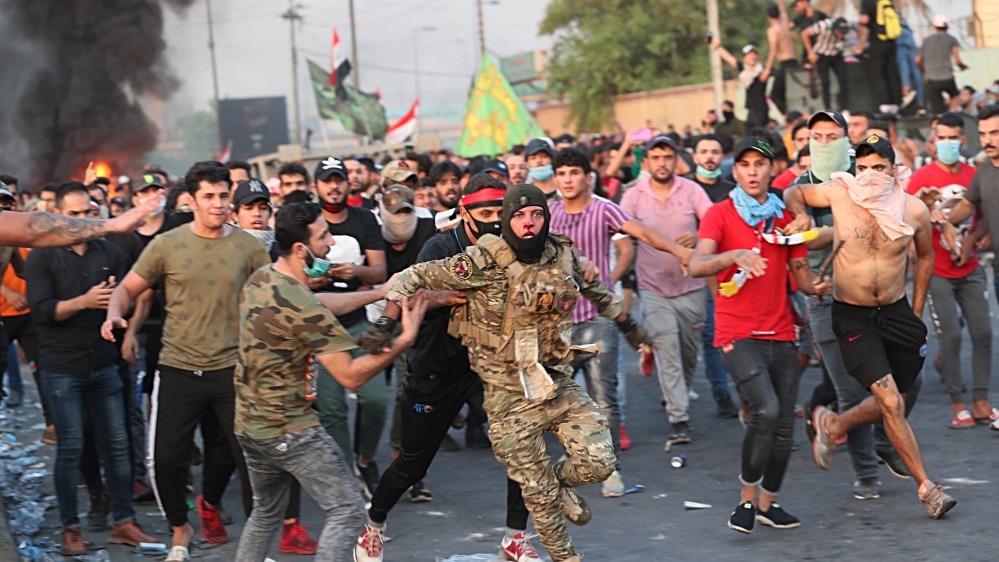 Iraqi people are now under such bad living conditions that are even worse than Saddam’s period. Besides the economic deterioration, after the war, one-third of the country has been plundered by ISIS and there has been a heavy wave of war and migration. Nobody wants another war anymore. The people of Iraq know very well that who ripes the benefits of the war, wealth and power, and who suffers the blood and the tears of it. However, as can be seen in the last days, Iraqi workers are also prepared to carry out a decisive struggle to get their rights.

The prescription of salvation is evident for the peoples living in all countries of the Middle East, especially in Iraq. In the Middle East, where the potentials of sectarian conflicts are still relevant, the solution can only possible with the class struggle that will unite the workers of all identities. Otherwise, the fire that has begun will quickly make possible civil war scenarios based on identity conflict. The people of the Middle East have no choice but a class struggle for the formation of Socialist Middle East Federation.