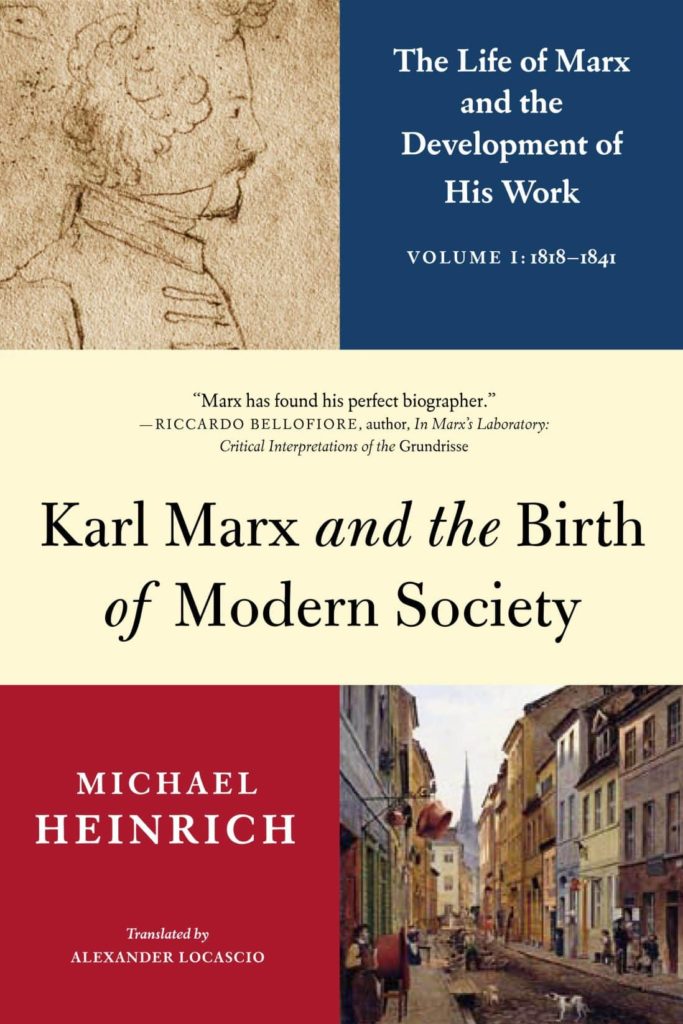 Book: Karl Marx and the Birth of Modern Society: The Life of Marx and the Development of His Work (Volume I: 1818-1841), Author: Michael Heinrich, Publisher: Monthly Review Press (2019)

Michael Heinrich’s biography of Karl Marx is spread on three volumes. It captures what most biographies reduce merely to a background mention: contemporary conflicts, struggles and disputes that engaged Marx at the time when he was writing as well as his complex relationships with a varied range of friends and opponents.

Throughout his youth, Marx struggled to reconcile with his own writings which took various forms – from poetry to newspaper articles to the essays that he wrote during his stay at the universities of Bonn and Berlin from 1835 to1837. In the autumn of 1837, Marx found himself in an intellectual and emotional crisis. In a letter to his father on November 10 that year, Marx penned down a scathing critique of his own poetry. He burned his recent outlines and announced his intention to completely give up on these projects. This was the point when he gave up his poetic and literary ambitions to study philosophy and law instead. Although Heinrich explains this in greater detail in the second chapter of his book, he mentions this event at the outset.

This biography is the first that talks about Marx’s life from 1818 till 1841 when he wrote his PhD thesis. It starts with an extensive discussion on the early life of Marx in Bonn and Trier. Then it examines the role of poetry inspired by romanticism in the development of his thought and his first interaction with Hegelian philosophy and with the Young Hegelians in his 1841 dissertation. Marx himself was neither a young Hegelian nor old – in fact, Heinrich argues that there are no schools of thought that can be bifurcated in this way. Young Hegelians developed increasingly radical positions. They invoked the memory of the French Revolution and sought to keep it alive. Old Hegelians were obsessed with the Prussian state.

Marx’s father-in-law, Ludwig Von Wastphalen introduced the young philosopher to the romantic school through the writings of Homer and Shakespeare. During his stay at Bonn and Berlin, Marx came across Hegel’s lectures on aesthetics, law and history. Marx was deeply influenced by Hegel’s lectures on aesthetics and it was one of the main reasons that he abandoned poetry and immersed himself in philosophy.

Already during Marx’s youth, there were breaks in his intellectual development that caused him to give up projects and re-think his critical enterprise. This book is a remarkably refreshing look at his life. Heinrich shows through his vast study of Marx’s life and work, that history is more than just ‘the work of great men’ – it also merits a look at the different processes in which they grow up both physically and intellectually.

By studying Marx’s letters, notebooks, and journalistic work of his young years, Heinrich interrogates the intellectual development of his work. By studying all the letters Marx wrote at an early age, Heinrich tries to trace down the theoretical questions (literary romanticism, religion and self-consciousness) with which Marx was preoccupied during his studies at Bonn, and afterwards at the University of Berlin.

For instance, Heinrich argues that the articles Marx wrote about education, literature, religion and state in the New York Tribune during the 1820s and 1830s, were largely due to Marx witnessing an unequal and oppressed society in the wake of the early industrialisation in most of the cities in Prussia. Hence, the political and social conditions of Prussia during his youth shaped his early writings. Already, in school, Marx was trying to comprehend the society around him through the essays that he wrote. By citing sentences from Marx’s final German paper in school, Heinrich shows that Marx was grappling with complicated questions; like whether man determines his own conditions or if they are somehow shaped by the objective conditions in which he lives.

What the author has attempted, is bringing together all the information about the environment in which Marx grew up, especially the particular conditions of the Rhineland. The Rhineland was a new Prussian province after having been ruled by the French for twenty years. It was comparatively liberal, with legal equality for citizens. The rest of Prussia was very conservative, half-feudalist even. If Marx had been born into the same family but only in a different place, in Berlin, the coincidence might have been decisive.

In this biography, Heinrich also mentions three recent biographies of Marx:  by Francis Wheen, Jonathan Sperber and Gareth Stedman Jones. He concedes during the course of this book that Wheen’s book is well-written and tries to take a look at Marx’s private life. However, he sees large parts of it as biased tales and conjectures. For instance, Wheen thinks that the reason Marx was occupied with the debates surrounding the place of religion in Prussian life and state was his Jewish heritage. Heinrich shows us that the lectures that Marx attended at the University of Berlin on the history of religion and the general condition of Jewish people who were treated as second-class citizens in the Prussian state were the main influences that empowered Marx to write about religion. Talking about Sperber’s book, Heinrich is of the opinion that judged by the extensive material he used, it seemed to be the most well-founded biography when it appeared. Because he is a historian, he uses a lot of footnotes. In Heinrich’s opinion, Jones wants to put Marx back into the nineteenth century, to say that his ideas have no relevance today. This is all fair critique, but perhaps the biographies Heinrich is talking about also suffer in his understanding, for not treating Marx’s context as integral to understanding the man himself.

In his book, Heinrich is saying something very different. Something we hardly find in biographies nowadays. Heinrich demonstrates that teleology in biographies is a rather poor construction, overlooking the moments of contingency, which exist in everyone’s life. The young Marx’s life grew along multiple trajectories and under the influence of various philosophical and poetic themes. It is important to understand the different processes in which Marx evolved as a person, political activist, as a theorist, and finally as a revolutionary. This book helps understand Marx as a person.

When we read Marx’s text, he is a theoretician for us. Most of the time, we focus on the logic of his theoretical arguments. But Marx also worked as a journalist for decades. He published hundreds of newspaper articles. He was also a political activist, a militant in response to the demand of the times. At certain moments in his life, he was very active; at others, rather silent when there were limited possibilities for his activism. But, activism was still a primary question for him. In remembering Marx, we tend to forget that it was the events of his life that gave it the direction.

Courtesy The News on Sunday