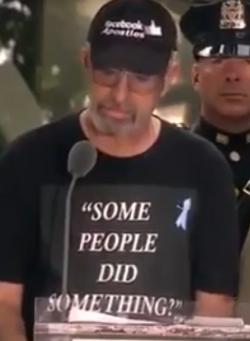 During a ceremony at ‘Ground Zero’ to commemorate the 9/11 events in the USA, Nicholas Haros, the son of one of the victims, wore a T-shirt implicitly criticizing Ilhan Omar, a Muslim Congress-woman for Minnesota, for her comment saying ‘some people did something’. Within hours of this – with the T-shirt plastered all over the right-wing media in Britain and the USA – Ilhan  Omar herself replied, expressing her personal horror at the 9/11 events. We also reprint here some comments from the blog of Richard Mellor, an American socialist, from the website Facts for Working People.

While I sympathize with Nicholas Haros and can’t imagine the grief that must consume him, forced, as he is to deal his mother’s death due to the terrorist attacks on 911, it is unfortunate that he chose this moment to join with Nazis, the KKK and other right-wing white nationalist and fascist groups in attacking Democratic Congressperson Ilhan Omar.

Ilhan Omar is a Somali. There are perhaps 12 million Somalis in the world. It is a tiny country torn apart by terrorist activity and years of colonial occupation by the British, the French the Italians and so on.  To this date, we know of no Somali involvement in the terrorist attacks that day.

We do know now that neither Saddam Hussein nor the Iraqi people had anything to do with 911, yet the US war-machine killed some one million of them, destroyed their country and drove hundreds of thousands of them abroad.

We do know that just about all of the terrorists that were on those planes were Saudis. It would seem to me that Mr Haros would have done better to have addressed his comments to the US president Donald Trump and his family who have very close relations and family links with the Saudi regime – the same regime that murdered one of its own citizens in its embassy in Istanbul, carved up the body and disposed of it, simply because he publicly criticized the regime’s lack of democratic rights and racist and misogynistic policies. Or perhaps Donald Rumsfeld should have been mentioned.

Perhaps Mr Haros should have addressed George W Bush, now a family friend of the Obama’s apparently, as he welcomed Taliban officials in Texas prior to these horrific events. In fact, up until 1999, every Taliban official was on the payroll of the US government. Trump is not the only one to have cosy relations with so-called terrorists.

As for Representative Omar’s remarks when she used the term “some people” with regards to the perpetrators of the attacks: It is not such a bizarre statement in that we don’t know for sure who was directly responsible. No small number of American citizens are convinced the US government itself was at the least not unaware of what was being planned.

Is it beyond one’s imagination to not sympathize with Representative Omar, a Muslim, and understand that she might be reluctant to identify the suspects as Muslims, given the Islamophobia that is present in US society at the moment?  She has been accused by the president of the US himself of being a terrorist. Imagine how she feels every minute of every day in this climate.

When I left the UK, it was not Muslims that were considered the greatest terrorist threat but people that were Northern Irish white Christians. White Christians, like most of the domestic terrorists responsible for all the mass killings in the US recently. The IRA claimed responsibility for a number of bomb attacks in pubs, public spaces and the like and much of their funding came from Irish Americans in cities like Boston, Chicago, San Francisco and New York City. I should add as well that the IRA would agree that they held Judeo-Christian values.

It was Christian Europe that murdered six million Jews not Muslims in the Middle East. Yet most Christians are totally repulsed by such acts, as most Muslims are by Islamic terrorism.

Part of the problem is that the US ruling class and its media has mastered the ability to almost completely dominate mass consciousness with little opposition. Most people do not think for one minute that the reality is that the vast majority of people killed by Islamic terrorism are Muslims.

It is very disappointing indeed that Mr Horos didn’t honour his mother with a condemnation of the forces behind 911 and the US Congress and its foreign policy for making it possible.