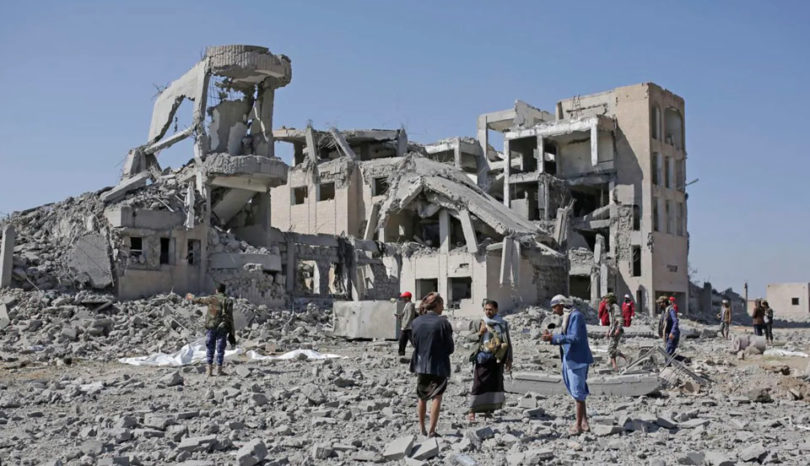 There are really only two sides to the war in Yemen. There are unarmed civilians. And there’s everyone else. The civilians are losing. Badly.

The 2011 democratic uprising in Yemen, part of the Arab Spring, succeeded in forcing out Yemen’s longtime dictator President Ali Abdullah Saleh. In a deal brokered by the Gulf Cooperation Council, Saleh was succeeded by his vice president, Abdrabbuh Mansur Hadi. In 2014, a civil war broke out which pitted Yemen’s Houthi rebels against President Hadi’s government. Between 2014 and 2015, the Houthis gradually took control of Sana’a, Yemen’s capital. Hadi fled the country in 2015 and is in exile in Saudi Arabia. In response, a military coalition led by the Kingdom of Saudi Arabia and the United Arab Emirates began bombing the country in March 2015 with the declared aim of restoring Hadi. The Saudi-led coalition receives assistance from the US, UK, and France while the Houthis are backed by Iran. (The Houthis appointed an ambassador to Tehran last month.) ISIS and Al-Qaeda are also active in Yemen.

The UN has called Yemen the “world’s worst humanitarian crisis.” Yemen relies on imports for 75% of its food. A coalition land, sea, and air blockade on Yemen has cut off desperately needed food and medicines. An outbreak of cholera affects half a million people. International aid group Save the Children has determined that as many as 85,000 children may have died from starvation and disease.

All of the belligerents, both domestic and foreign, have committed rapes, torture, extrajudicial executions and detentions, and have conducted indiscriminate attacks on civilians. These findings appear in a report to be presented this week to the UN Human Rights Council, but they will not be news to anyone who has followed the conflict. The UN panel which produced the report—the Group of International and Regional Eminent Experts on Yemen—has given Human Rights Council chief Michelle Bachelet a list of 160 undisclosed persons which the panel recommends be prosecuted for war crimes.

Since 2015, the US has been assisting the Saudi-led coalition with target spotting, intelligence sharing, and (until November 2018) in-flight refuelling of coalition aircraft. Many of the bombs dropped on innocent Yemenis are supplied by the US, such as the bomb which killed 40 Yemeni schoolchildren in a Saudi airstrike on a school bus on August 9, 2018. Examination of bomb fragments found at the scene disclosed that the bomb was manufactured by US defense contractor Lockheed Martin. One of the justifications President Trump gives for US involvement in the Yemen war is the need to maintain US arms sales to the Saudis.

President Barack Obama took the US into Yemen’s civil war in order to throw a bone to the Gulf States which had opposed his nuclear deal with Iran. Trump, who has done his best to reverse all of Obama’s other policies, has perversely continued US involvement in Yemen. In doing so, Trump has been opposed even by prominent members of his own party, such as Florida Senator Marco Rubio and Kentucky Senator Rand Paul.

On April 16, 2019, President Trump vetoed a Congressional resolution which invoked the 1973 War Powers Resolution and would have forced the US to terminate assistance to the Saudi-led coalition. The 53 to 45 vote in the Senate which followed on May 2 fell short of the two-thirds supermajority needed to override a presidential veto.

Undeterred, Congress is making another attempt to end the Saudi-led bombing campaign in Yemen, this time using Congress’ power of the purse. In July, the House passed amendment 26 to the 2020 National Defense Authorization Act. The Khanna-Smith-Schiff-Jayapalamendment blocks intelligence sharing, logistical assistance, and the transfer of spare parts used in coalition warplanes.

Will the Khanna-Smith-Schiff-Jayapal amendment survive in the Republican-controlled Senate? Probably not. Not a single Republican had the guts to vote in favor of the House version of the NDAA. Nevertheless, a bipartisan group of more than 40 legislators from both chambers has written the leaders of the House and Senate armed services committees urging that the Khanna-Smith amendment be retained in the final form of the NDAA.

The Trump administration maintains that a negotiated settlement, not unilateral US withdrawal, is the way to end the war in Yemen. The Wall Street Journal reported on August 27 that the Trump Administration is seeking the first-ever direct talks between the US and Yemen’s Houthi rebels.

The problem with talks, as Bonnie Kristian writes in The American Conservative, is that “Talks are good, but their outcome and timeline are uncertain. It could be months or even years before a deal is reached * * * .” (She might have added: “or never.”) She’s right. Several rounds of talks between the Houthis and the Yemeni government have already been held, but the war goes on. US withdrawal could end the war tomorrow.

The South Will Rise Again

A fissure has opened in the Saudi-UAE coalition. In a surprise to the Saudis, the UAE announced in July that it was pulling most of its forces from Yemen. In addition, the Saudis and Emiratis back opposing forces in Yemen. While the Saudis back the officially-recognized government of President Hadi, the UAE backs a revived separatist movement in Yemen’s south. Before unification in 1990, north and south were two countries: the northern Yemen Arab Republic and the southern People’s Democratic Republic of Yemen. The marriage of the two countries has not been a happy one, with the south rankling under the domination of the north. The southern separatist movement constitutes a second civil war within the larger civil war centred in the north between the Hadi government and Yemen’s Houthi rebels.

After the Houthis took Sana’a in 2015, the Yemeni government moved its capital to the southern port city of Aden. In August, Southern separatists wrested control of Aden from the Hadi government. The Hadi government blamed connivance by the UAE, which the UAE denies. Fighting outside Aden continues between Saudi- and UAE-backed militias. On August 29, Emirati warplanes attacked government-backed forces trying to retake Aden.

That’s about as obvious as a rift can get. Nevertheless, the Saudis and the UAE are publicly trying to keep up the appearance of a unified coalition as Yemen totters on the brink of fracturing permanently. Whatever happens, unless the war ends, the people of Yemen will be the losers.