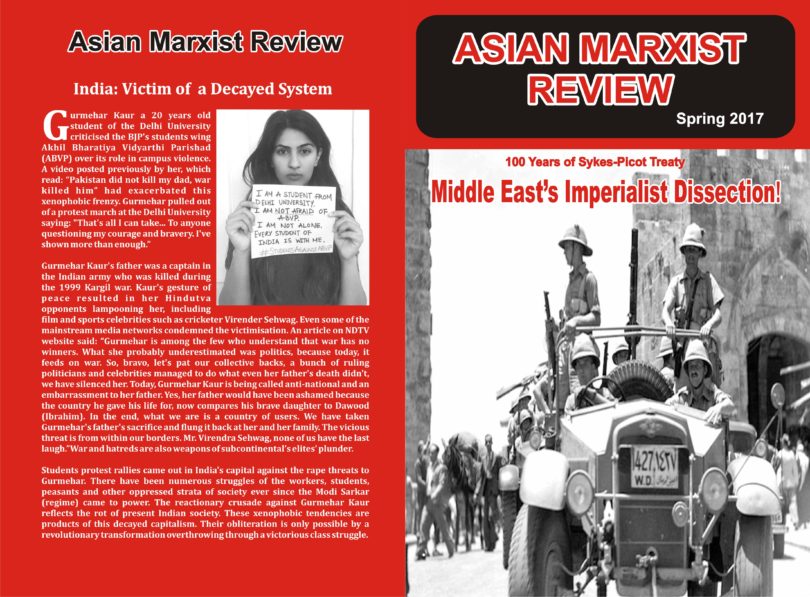 AMR’s spring 2017 issue comes out in the centenary year of the 1917 Russian revolution. It was the greatest single event in human history. It proved to humankind that vast majority of the working people can take power and build their destiny with own hands. Society can function without greed, exploitation, inequality and competition. The revolution in Russia was triggered by a demonstration of the women workers on the International Women’s Day. An article that explains the significance of the event is included in this issue. There is much debate on India, much flaunted largest ‘democracy’ but this harsh reality is concealed that it also contains the highest concentration of poverty in the world. The article explores the real character of the BJP regime and Indian ruling classes. It develops the perspectives on the class struggles that loom ahead. It’s also hundred years since the Sykes- Picot treaty that contrived the imperialist cleavage of the Middle East. We discuss the history of imperialist intrigues, aggressions and the resulting surge of the virulent Islamic terror devastating the region at the present. The revolutionary movements and changes of the past period and prospects are also analyzed.

A Communist parliamentarian from Kashmir elected in five elections from Kulgam, a constituency in the heart of last year’s mass upheaval, writes a vivid narrative of the uprising. Another article by a member of the Communist Party of France analyzes the presidential elections next month in this historic European power. Our analysis of Iran probes the escalating contradictions in the womb of society under the despotic rule of the Mullah clergy, consequences of the regime’s nuclear deal with the imperialists and prospects of resurgent movements simmering below. We also look at the World Economic Forum at Davos and the worries of capitalism’s experts at the bleak future of the system.

AMR is being published simultaneously from India and Pakistan. It’s first such publication on both sides of the Radcliff line since the blood-spattered partition of 1947—a crime of British imperialists in connivance with the native ruling classes that eliminated real India and created Bharat, Pakistan and Bangladesh. The wounds inflicted during that blood-soaked August are still festering. After seventy years of this cleavage, this ancient society’s rich civilization is ravaging with elements of barbarism raising their ugly heads. Gimmickry of war and peace of the ruling elites has proved to be a chicanery. Religious, sectarian and ethnic hatreds are ripping apart the social fabric of these once relatively harmonious lands. South Asia’s oppressed masses shall have to arise in a class unity and struggle, cutting across these nationalist and religious chauvinisms to avenge the crimes of imperialism and begin the process of subcontinents voluntary unification. Liberation of more than one-fifth of the human race is only possible through a victorious socialist revolution. This historic stride of the working classes shall achieve the ultimate destiny of peace, prosperity and emancipation— “humanity’s leap from the realm of necessity into the realm of freedom.”