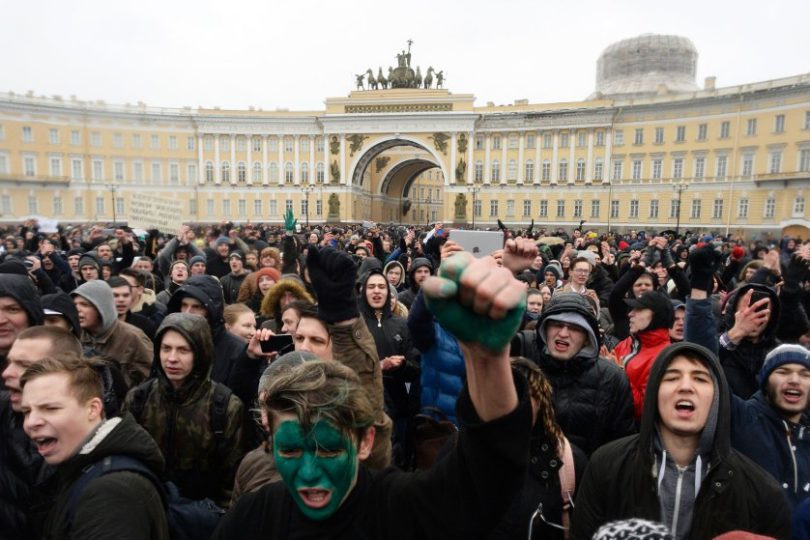 The protests last Sunday in Russia which aroused such euphoria in the western media have died down, but this may be a temporary pause in the outburst of a people simmering with revulsion against the conditions of life in a country riddled with worsening socio-economic crisis. This new upsurge of protest demonstrations was the most significant since the 2012 movement that challenged Putin’s rule. It began on 26th March on Russia’s Pacific coast, with hundreds marching in Vladivostok. Throughout the day reports of rallies, most of them illegal, flowed in from dozens of cities, including metropolises like Novosibirsk and Yekaterinburg, and even Makhachkala, the capital of Dagestan, a North Caucasian region. But the harshness of the regime towards the protests with hundreds of people arrested suggested that Mr. Putin’s government was taking no chances.

However, the concerns of the western imperialists and their seething hatred towards Putin do not spring from any real sympathy for the exploited masses and the perils of the autocratic rule they have to endure. The collapse of the Soviet Union, restoration of capitalism in Russia and the rise of Putin since 2000 have had erratic and contradictory responses from the western strategists, who seemed baffled, to judge from their erroneous analysis of the rapid events that have unfolded in Russia over the last few decades. They were euphoric at the collapse of the Soviet Union and the fall of the Berlin Wall. They had won the cold war; a new world order of capitalist rulership, they bragged, would flourish ever after. It was ‘the end of history’!

However, as Marxists had explained in advance and throughout those gigantic events when ‘communism’ was falling apart in Russia and eastern Europe, the emerging bourgeois regimes that arose in Russia and eastern Europe were not based on a healthy capitalist system, but were rather Mafiosi-style capitalist cliques, mostly former bureaucrats of the Stalinist administrations and functionaries from the ‘communist parties’ of their ruling castes. Soon these regimes, particularly that of Putin, became states antagonistic to the western imperialists, threatening their markets and businesses with rival economic and geopolitical agendas. A new ‘cold war’ began at the beginning of this century, with China becoming a major economic power and the Russian regime with its heavy military and nuclear arsenals being developed from those of the Soviet era.

This superficial and contradictory relationship between Russia and the west created a certain notion amongst the intelligentsia in countries like Pakistan that Putin or the Russian regime were in some way of a progressive character and could play an anti-imperialist role. This is false from beginning to end. Putin represents the former ‘communist’ bureaucrats that have become billionaires and plundered the Russian economy and its people. Most of these are gangster politicians complicit in crime and corruption to the hilt. Vladimir V. Putin is no Vladimir I. Lenin. Lenin led a socialist revolution and the first-ever workers’ state in history, that demolished feudalism and capitalism and broke the shackles of the imperialist stranglehold. A planned economy was introduced that transformed Russia from Czarist primitiveness into a modern advanced society that surpassed Western imperialism, particularly in the field of health, education, science and technology.

This is the centenary year of the Russian revolution, also known as the October revolution of 1917. The spectre of its reincarnation today is haunting the politicians and strategists of crisis-ridden capitalism and western imperialism. Putin is no less terrified at the prospect of its recurrence; hence even the small protests last Sunday jolted his regime. Under Putin’s control, the Kremlin plans to sit out the centenary of the Russian Revolution. The New York Times wrote after the events, “The largest protests took place in Moscow and in St Petersburg, where they spilled onto Palace Square—an echo of the 1917 Russian revolution that is unlikely to be lost on the Kremlin… Never mind that the upheavals of 1917 transformed the country and the world, abruptly ending the long rule of the Czars, ushering in the Communist era and spawning an ideological confrontation with the West that still resonates. The more likely explanation, some Kremlin officials, historians and other analysts say, is that President Vladimir V. Putin loathes the very idea of revolution, not to mention the thought of Russians dancing in the streets to celebrate the overthrow of any ruler.”

Capitalist restoration in Russia has wrecked havoc in society, and the working classes and the oppressed have suffered the ‘fruits’ of the market and free enterprise corporate capitalism. After the economic collapse of the late 1990’s, there was a certain fragile recovery, but that has failed to raise the living standards of society as a whole. Since 2012 there has been another economic decline in Russia. Over the past three years, the oil-price collapse and Western sanctions tipped Russia’s economy from stagnation into recession, and ordinary Russians have been hit hard. Although GDP growth rate is projected to return to positive territory again this year, retail sales continue to fall and inequality is growing. The higher growth rates do not increase the living standards of society in present-day capitalism anywhere!

The World Bank says that in this year the number of people living in absolute poverty will grow by 1.1 million people to 16.2% of the overall population. This would mark the largest increase in poverty since the economic crisis of 1998-1999 and slash the gains made during the years of improvement. The increase in poverty will be worsened by inflation and unemployment that is already soaring painfully. According to the Public Opinion Foundation, 47 percent of the population consider themselves “the working poor.” “It’s hard to give up what you used to have, so people feel they have become much poorer, even if this is not quite the case,” explained its director Byzov.

However, the ratings of Vladimir Putin have been astonishingly high: between 80 and 90 percent, according to most pollsters. In a situation where there is no real alternative opposition and where Russia’s present communist party under the leadership of Gennady Zyuganov has capitulated, being actually a reformist political outfit, Putin doesn’t have a serious challenge from any real opposition party or leader. He has mainly used the Old Russian chauvinism of Czarist times to boost up his support. The interventions in Ukraine and the annexation of the Crimea enhanced his popularity. His anti-American and anti-western rhetoric has added fuel to his chauvinist pretensions. During the 2011-2012 protests against his regime, Putin had scorned Obama and accused Hillary Clinton of sending “a signal” that had set off the demonstrations. It was any easy foreign scapegoat for his regime’s predicaments. But the election of Donald Trump as president of the US has also played into this dynamic by depriving Putin of this distraction tool for the masses.

Apart from his diatribes with the west Putin has embarked upon interventions in the Middle East. Russia has exploited the waning of American influence in the region due to the severe constraints of the US, its aggravating economic and social crisis. The Russians have even developed cordial relations and strategic agreements with the traditional American allies including Saudi Arabia. They have gone to the extent of setting up training bases for fighters of the Kurdish YPG militia that used to be a totally American-backed group in Syria. They have also struck a deal with the Qataris to invest in Rosneft, a Russian state-owned oil conglomerate. The United Arab Emirates is planning to buy a batch of Sukhoi fighter jets. “Like it or not, now you can’t do without Russia in the Middle East,” a Western diplomat told a British media outlet.

The Middle Eastern rulers are playing their own interest games in the backdrop of a weakening US imperialism and the struggle for the resources between the contending world powers. Daniel Kurtzer, a former American ambassador to both Israel and Egypt remarked, “This is a region that knows how to play big powers off each other.” But the Putin regime also has its own crisis and constraints. Vitaly Naumkin, of the Institute of Russian Academy of Sciences, says that “Russia neither has the desire nor the resources to become a new hegemon in the region…we’re realists, we can compare figures. Russia’s economy is one-tenth the size of America’s; its defence spending is 11% of America’s in dollar terms. And in contrast to Soviet times, today’s Russia does not promote an alternative system of governance. Instead, it preaches stability.” These military and diplomatic ventures are tenuous and can boomerang on Putin if the decline in Russia slides into a deep recession.

Although last Sunday’s demonstrations have not been sustained for several reasons, here are some striking elements that have entered Russia’s political landscape after decades. Artyom Troitsky, a Russian journalist and concert promoter who for years has tracked Russian youth culture, said that the fact that so many young people took part in the protests in Moscow and elsewhere “is exceptionally important… Young people have always been a catalyst for change and their presence suggests a break from the lack of political interest they had exhibited in recent years… This does not necessarily mean that the tide has turned but something is definitely changing,” he said. The present Kremlin regime in the past had skilfully created a youth alternative in the form of a pro-Putin youth movement called Nashi and other patriotic ventures to divide and confuse the youth. But what seems to be a worry for the Kremlin is a certain decline and waning of Putin’s support amongst the youth.

The reality is that there is a limit to the foreign adventures that Putin can embark upon to whip up domestic support. National chauvinism also has certain limits beyond which it cannot be stretched. This cannot go on indefinitely. If capitalism in the advanced capitalist countries cannot develop society, it has much less potential to bring any respite for the Russian masses under a crony- and crime-infested regime. The protests of 26th March were on the issue of the corruption of Dmitri Medevedev, Putin’s loyal but corrupt and opulent prime minister. But new revolts and upheavals can erupt suddenly as if out of the blue in this intensifying social crisis. Such a movement in the centenary year of the greatest revolution in human history can have a world-ranging impact and, arising from the land of October, it can develop into a revolutionary wave that would sweep this rotten capitalist system across Russia and far beyond.