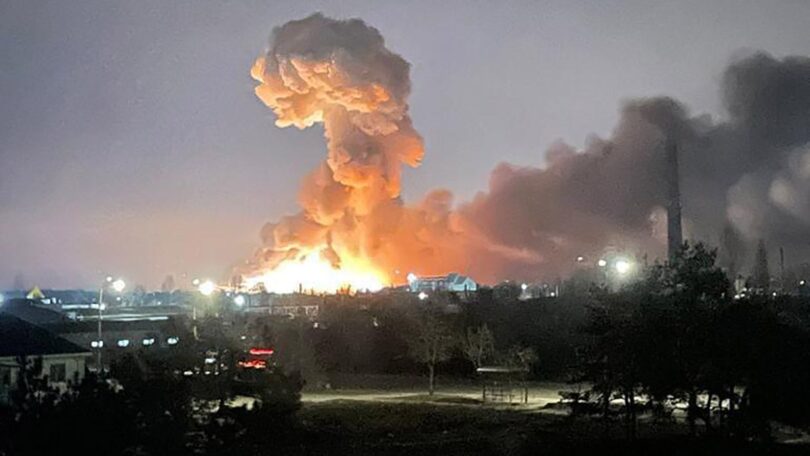 In the early hours of February 24, Russian imperialism’s attack on Ukraine finally began. Once again, the barbarism of war strikes in the heart of Europe. The invading troops disembarked in Odessa (a Black Sea city to the west of the Crimean Peninsula) where fighting is taking place with the Ukrainian army. Russian authorities continue employing the excuse of “protecting the Russian-speaking population,” the “demilitarization and denazification of Ukraine” and claim to be carrying out “military operations” limited to Eastern Ukraine. The truth is that they have begun a large-scale invasion: missiles are striking beyond Donbass, in Dnipro, Kharkov and Kiev, where the troops that entered from Belarus are already a few kilometres away with their tanks. From a military-strategic and economic point of view, Russia plans to quickly occupy the largest industrial city in the Donetsk region, Mariupol, and advance in Zaporozhye and Kherson to resume its operation of the water canal planned for occupied Crimea. Our comrades of the Ukrainian Socialist League report fighting taking place in the vicinity of the capital, warning sirens, explosions and the call of the Ukrainian government for the population to resist the invasion with weapons.

3. With these actions, Putin declared defunct the Minsk Protocol, signed on September 5, 2014 and February 12, 2015, after the negotiations of the Contact Group and the set of measures for the implementation of said agreements, signed by the “Normandy Four” (Germany, France, Russia, Ukraine). The measures never succeeded in establishing a complete ceasefire, nor were they implemented by the Ukrainian and Russian governments. Ukraine systematically refused to hold elections in the territory of the DPR and the LPR, which was required by the document of February 12, 2015. And Russia never withdrew its troops nor the forces of the “private military companies” that established Russian political-military control over the entire region.

4. With the current invasion, Russian imperialism is taking another step in its attempt to recover part of the territories previously controlled by the Stalinist bureaucracy and lost in the 1990s, to strengthen itself as a privileged partner of the rising Chinese imperialism and thus stop the advance of NATO and US and European imperialism in the region.

5. In the face of this aggression against the Ukrainian people, the workers of the world cannot remain silent. It is necessary to repudiate with the greatest energy this invasion by Russian imperialism and the bloodbath that has begun. Let it be heard loudly throughout the planet: Russian army out of Ukraine! Solidarity with the workers and people of Ukraine!

6. For weeks now, in the face of the imminent invasion by Russia, US imperialism and its allies have been promoting a deceitful campaign, showing themselves to the masses of the world as the standard-bearers of peace and the custodians of Ukraine’s sovereignty. The cynicism of US and European imperialism knows no bounds. Their armies are the ones perpetrating death throughout the world, and they have been deploying increasingly belligerent actions in the region via NATO, using Ukraine as the theatre of their expansionist operations. Their complicity in the war that has begun is absolute. The workers of the world must place no trust in these butchers at the service of big capital. NATO and Western imperialism out of Eastern Europe!

7. Faced with the Russian advance, the United States and Great Britain have announced sanctions that apparently would only affect Russian government officials and some oligarchs close to Putin. The German government has ordered the suspension of the certification of the Nord Stream 2 gas pipeline that would bring Russian gas to Europe. However, Putin hopes that an eventual increase in the price of gas to consumers and Germany’s dependence on that energy source will soften its position.

8. Western imperialism assured Ukraine and Russia that their armies would not directly participate in a large-scale open military confrontation and would limit themselves to supplying Ukraine with weapons. Beyond the propaganda operations, such deliveries will not modify the correlation of forces. The massive Russian army is equipped with new and advanced weapons. The Ukrainian army is very weak and small, and, as a legacy of the former USSR, has weapons that are over 50 years old and obsolete aircraft. Only the international solidarity of the workers of the world, beginning with the Russian workers, can stop the carnage and force the invaders to withdraw from the invaded territory.

9. Repudiating, rejecting and resisting the Russian invasion can in no way imply placing any trust in the bourgeois government of Volodymyr Zelensky, who supports Western imperialism, develops an antisocial and neoliberal policy against the Ukrainian workers in the interest of Western imperialism, and, appealing to patriotic sentiments, paves the way for right-wing and far-right expressions in the country. By strengthening the far right and opening the door to NATO, Zelensky indirectly gave Putin excuses to invade. Nor can we cease to raise the right to self-determination of the regions that have expressed their desire to separate from Ukraine.

10. War and rising inter-imperialist conflicts are a threat to all of humanity. Against this, and to achieve peace and the wellbeing of workers and the people, working towards the socialist revolution to put an end to this system of oppression and exploitation becomes ever more necessary.

11. From the ISL, we call for united actions and expressions of repudiation across the world against the Russian imperialist invasion and in solidarity with the Ukrainian working people, while also denouncing the actions of Western imperialism, which attempts to surround Russia, increases its presence in the Black Sea, seeks to incorporate Ukraine into NATO, accumulates military forces in Greece and counts on an increasingly aggressive Biden, who tries to recompose the lost power of the United States expressed in the statement “America has returned.”

12. In particular, we call on trade unions, social movements, human rights organizations, personalities of art and culture and political organizations from all over the world and in particular from Europe to develop the broadest unity and mobilization against the war, as workers and organizations from Russia and various countries have already begun to do.