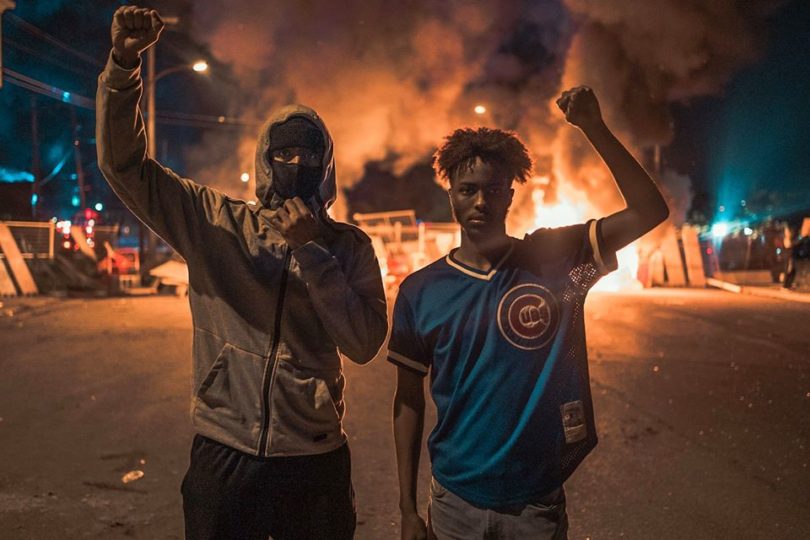 United States of America are in flames. The Minneapolis protests started after the death of George Floyd, a black man thrown on the ground and immobilized by three police officers was suffocated until his death by a fourth white supremacist policeman, that squeezed Floyd’s neck against the floor for agonizing nine minutes.

The murderer was filmed by a young woman that witnessed the crime. Floyd said to the officers, several times, that he could not breath and bagged not to be killed, however  nothing changed the policemen’s attitude. He simply died because he was a black man.

With the video exposure, marches and protests against George Floyd’s homicide and against racist police violence took place around the town. The movement was organized originally by organizations like BlackLivesMatter. But the protests became multitudinous and spread all over the country. The demonstrations took on a more spontaneous characteristic. Other oppressed minorities – such as Latinx, Arabics, Jewish and Asians, besides a large amount of the young white working class – joined the afroamerican marchers.

It is important to register that the overwhelming criminal incompetency of Trump’s administration regarding its Covid-19 response helped to exacerbate and inflame the revolt. The Novel Coronavirus pandemic already victimized over 100 thousand lives in the United States, disproportionately impacting the black community. The failed and partially scrapped health care system of the United States plus the economic crisis that has been developing over the past few decades put over 40 thousand workers onto unemployment.

The protests that were originated in Minneapolis quickly spread all over the country, arriving in cities such as Denver, Milwaukee, Detroit, Chicago, New York, Philadelphia, Washington, Cleveland, Dallas, Atlanta, Louisville, Los Angeles, Seattle, Miami, Indianapolis, Pittsburgh and many others, with a total number of 75 cities. In all of these cities the same scenario played out, enormous crowds of citizens speaking out against the injustice blocking the downtown streets while looting stores and setting various fires, all while clashing with police forces.

This is not the first African American uprising and call for justice in the history of the United States. The biggest one, but not the first, began after the April 4th murder of Dr. Martin Luther King, a Baptist Church Pastor and leader of the Civil Rights movement in 1968. Whose marches lasted 7 days and spread across 125 cities, resulting in at least 46 deaths and 2,600 injured, all due to the overwhelming oppression forced upon by the 82nd Airbone Division of the U.S. Army. Other Civil Rights demonstrations occurred throughout the decades. In May 1980 race riots started in Miami due to the murder of an African American Arthur McDuffie. In April 1992 another uprising occurred in Los Angeles called “The LA Riots” which were caused by the unjust acquittal of 4 police officers who were charged with the unlawful beating and arrest of an African American man named Rodney King, all of which was captured on video tape. The LA Riots quickly spread to Las Vegas, Atlanta and New York. In April 2001 another series of violent protests occurred in Cincinnati after an unarmed 19-year-old African American Timothy Thomas was shot and killed by a police officer named Stephen Roach. August 2014 marked another chapter in the fight for racial equality when Michael Brown Jr. was shot and killed by a white police officer named Darren Wilson in Ferguson, Missouri. This sparked outrage amongst the majority of Americans and in turn the world, which all culminated in the creation of the world renown organization “BlackLivesMatter”.

Immense suffering, civil rights violations and the growing possibility of death at the hands of the police simply because of the color of your skin has been a constant fact of life in the African American experience. According to a study made by the Equal Justice Initiative, between 1877 and 1968, no more than 4,084 African Americans were lynched and killed by White Supremacist organizations such as the Ku Klux Klan. Malcolm X was right when he said “For the Black man, the American dream seems like a nightmare”. In the history of America the African American uprisings have been expressing a revolutionary cry, the American peoples desire to have total freedom from oppression, terror and exploitation. The life imposed by the racist capitalist system’s structure of domination and exploitation, controlled by the white elite that speak in the name of the great capital. The reason why Malcolm X also said “There is no capitalism without racism”.

The middle class liberals and democrats who were formed by the white elite say that they understand the reason for the protest, although they condemn the looting, destruction and “violence” as savage, irrational and animalistic actions. This is the same stereotype of the black rights movement that is ever-present in Neo-Nazi and White Supremacist ideology, used to explain the imagined and inaccurate superiority of the Caucasian race. Regarding these accusations the leader of the movement in Minnesota, the young African American woman Tamika D. Mallory replies, “Do what you say, this country is supposed to be about the land of the free for all. It has not been free for black people, and we are tired. Don’t talk to us about looting, y’all are the looters. America has looted black people. America looted the Native Americans when they first came here. So looting is what you do. We learned it from you, we learned the violence from you. The violence was what we learned from you. So if you want us to do better than dammit! You do better!”

The protests confront the peace of the capitalist lords. This peace represents the war against African American people. This uprising is forwarding the idea and reality of a world with freedom, justice and equal recognition of human kind for all. Because this movement is confronting a political and economical system that throughout history has shown itself incapable of guaranteeing those rights. Which creates a reality for African Americans that is surrounded by violence and fatal oppression.

The current outrage is justified and goes against specifically the police and security forces who have been charged with enforcing the so called “peace” which the people have grown weary of. This outrage is not only directed at the racist police offices that killed George Floyd but to the whole racist police institution of the United States. One of the moments that showed the most anger and radicalization was when the police station was set ablaze by protestors in Minneapolis. Nothing of this magnitude has been seen in the United States in at least 70 years.

With the riots in Washington the president Donald Trump was taken to a bunker deep within the White House, last Friday according to the New York Times.

Donald Trump made the National Guard available for deployment to the governor of Minnesota, Tim Walz. Trump then said “When the looting starts, the shooting will start”, which instigated armed reactions from white supremacist groups against the protests. The Minnesota Governor declared a state of emergency and deployed the National Guard. The National Guard is a form of military force used to repress violent protests and bolster the non-military police forces. The same measure was followed by 11 other states and the District of Columbia, with many cities also declaring a curfew for all residents. In total 1,669 people were arrested around the country, Most of whom being young. At least 3 people died, one of which was a police officer.

It is important to point out that besides the radicalization of the movement – that mostly developed spontaneously – they started to cultivate small organizational measures. The looters of big stores started to distribute the stolen wares to poor communities and churches that are being used as shelters for the activists.

The pain caused by George Floyd’s death and other African American people is a pain that we know all too well in Brazil. In our Country the racial violence is present constantly. Joao Vitor, Joao Pedro, Claudia and many others were murdered while their killers remain free. In Brazil, we can learn from the Minneapolis uprising. We need to organize our pain and transform it into flames. Our lives matter.

We also have to build an international campaign against oppression and the use of the National Armed Forces, that Trump wants to impose. The anti-racist revolt inflames America and illuminates the course of the fight for the whole world.