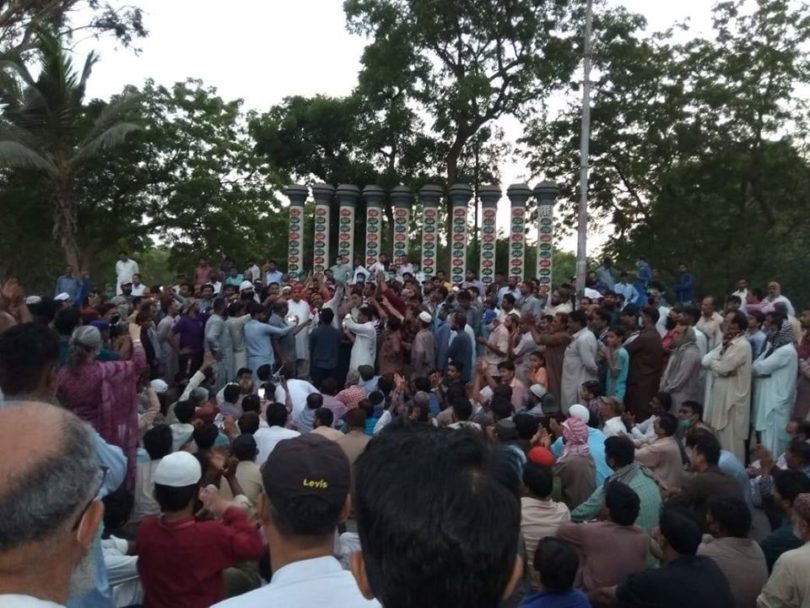 The present regime of Pakistan Tehreek Insaaf has, yet again, taken U-turn on its promises and claims, and officially decided to privatize the Pakistan Steel Mills. In this regard, laying off 9350 of the steel workers with the deceiving policy of “Golden Hand Shake” has already been approved. This is social genocide of the workers against which they have launched a struggle.

On June 4th, Pakistan Trade Union Defence Campaign (PTUDC), Insaf Workers Union and others of the Steel Mills Joint Action Committee organized a rally from Allah Wali Chorangi to National Highway and the call for a sit-in was also made but the fascist character of this state was revealed the moment the protest started as a large number of rangers and police were deployed. The law enforcement agencies trampled upon the code of law as they baton charged the protestors and tried to restrain them. Yameen Jumro, President CBA, Iftikhar Abbasi, Information Secretary Progressive Union and 11 others were arrested but had to be released in the evening due to the pressure of the workers.

Despite state terrorism and numerous obstacles thousands of workers staged a massive protest in Karachi. During the protest workers chanted slogans, “No To Unemployment“, “What do we want… Employment!“, “Have some Shame!“, “No To Tyranny” etc… The immediate demands by workers included, their re-instatement at their jobs, an end to the policy of privatisation. Participants chanted slogans against the Tehreek Insaf government. “I feel ashamed today that I voted for this government“, a protestor said, PTI government had promised to provide 10 million jobs but instead of giving, jobs are being taken away from us“. “I’m 58 years old, and there were 2 years remaining in my retirement and now they have taken my job from me“, a manager said. Majid Asghar of PTUDC and leader of Pakistan Steel Mills workers said,”the Pakistani state is weakened and indebted. World Bank and IMF are deeply rooted in the Pakistan, the state has even lost its legitimacy. Furthermore, he said, the capitalist system is an enemy of the working people and must be overthrown”.

The workers are optimistic despite the repression they have had to face, and they pledged to continue the struggle till their demands are met. PTUDC launched campaign across the country in solidarity with Pakistan Steel Mills workers. The hashtag “#NotoPSMRetrenchment” in trending on social media and thousands are expressing solidarity. Along with this, nationwide protests are planned to be held, we appeal to all trade unions, workers’ organisations and progressive elements of the society to become a part of this struggle. On one hand, the bourgeoisie has made deadly assaults on the workers in the shadow of corona pandemic, on the other hand, workers are fighting against these attacks. This is not the solemn struggle of Pakistan Steel Mills workers, the whole working class shall, inevitably, have to become a part of it.