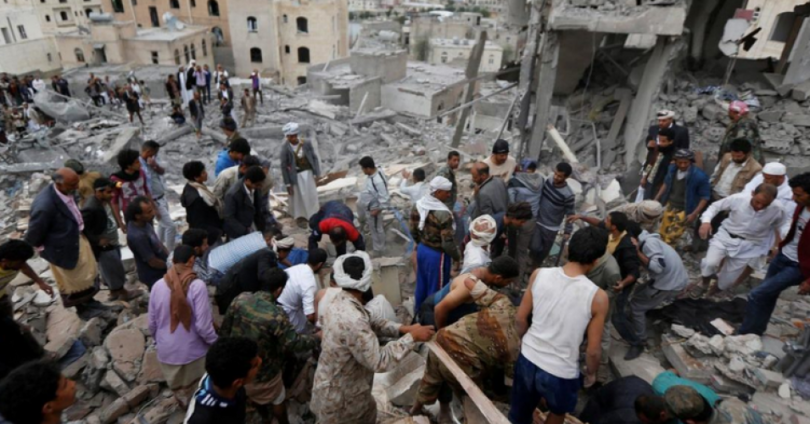 According to a recently released UN report, “The war in Yemen is now the world’s worst humanitarian crisis, with more than 22 million people — three-quarters of the population — in desperate need of food, aid and protection. Over 18,000 devastating airstrikes were conducted against Yemen over the past three years, spreading mayhem and carnage. Nearly 17.8 million people are food insecure and 8.4 million on the brink of famine. Yemen is suffering from the largest outbreak of cholera in recent history.”In November 2017, Save the Children reported that 130 children were dying every day, with 50,000 children already believed to have died in 2017. More than a million children are suffering from malnutrition. 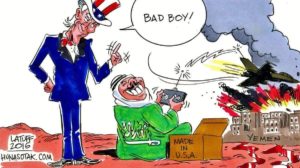 In the aftermath of the revolutionary upheaval of 2011 that swept across the Middle East and North Africa, a bloody counter-revolutionary offensive has cast Yemen into mayhem. External prying by the Saudis and Iranians has drastically distorted the popular uprising, turning it into a vicious sectarian conflict.

This carnage in Yemen is militarily and diplomatically supported by US imperialism, with Euro-imperialists serving as lackeys. Washington has relentlessly targeted those leaders and countries that have resisted submission. There has been massive destruction; including massacres and de facto partitions along ethno-religious lines. Imperialist corporate vultures are moving in, securing lucrative ‘rebuilding’ contracts in bombed cities. Meanwhile, the oil magnates are taking over hydrocarbon reservoirs under the watch of Israeli Zionists and the US military.

The massive Arab revolts failed to break this vicious dynamic. Yemen entered the ‘Arab Spring’ when Tunisia’s Ben Ali was overthrown on January 14, 2011. The contradictions in the womb of Yemeni society erupted onto the streets. Thousands marched through the Sana’a, demanding that Saleh step down. The protests intensified and spread throughout the country, spearheaded by the youth. Significantly, ordinary women — veiled and unveiled — joined the struggles.

Saleh initially refused to resign, but in a June 2011 bomb blast, he was seriously injured and airlifted to Saudi Arabia. On November 23, he acquiesced to hand power to a transitional government headed by his vice-president Abdu Rabbu Mansur Hadi, a Saudi stooge. In September 2014, the Houthis revolted. Houthis, who were vying for power, are a moderate Shia sect called Zaydis, with most rituals common with the Sunnis.

Their militia took over government buildings in the capital while the army looked away. Hadi fled to Aden and pleaded with Riyadh and Abu Dhabi for military assistance. With the backing of the US and British imperialists, the Saudis and Emiratis assembled an alliance of compliant Middle Eastern and African states — Bahrain, Egypt, Jordan, Kuwait, Eritrea, Morocco, Senegal, Somalia and Sudan — acting in the name of Hadi’s government in exile. On March 26, 2015 the airstrikes began, initially to prevent the fall of Aden. Without the intervention of the Saudi-led coalition the Houthi troops would have taken the whole of Yemen.

In the on-going proxy war, the Houthis mainly get money and training aid from the Iranian clergy. They have developed their own means for procuring military equipment mainly through gun runners from North America and Europe. Initially, it was the Obama administration that gave the Saudis the green light in Yemen in order to salve Saudi grievances over the US nuclear deal with Iran. At present, most of the populous north, including Sana’a, remains under Houthi control. In the long-run, an internationally backed peace agreement might put an end to external military intervention. However, fighting will probably continue in Yemen.

In stark difference to other states of the Arabian Peninsula, Yemen has been a republican country for half a century, divided into two states until 1990. In the North, Nasserite nationalists had triumphed over the Saudi-backed Imamate. In South Yemen, Abd al-Fattah Ismail Ali Al-Jawfi and young army officers belonging to the Yemeni Socialist Party led a successful revolutionary insurrection in 1970. The revolutionary government evicted the British imperialists from the port city of Aden, which controls the entrance to the Red Sea. A new state, the Peoples Democratic Republic of Yemen(PDRY) was created. It was the only proclaimed socialist state in the Arab world.

The PDRY leadership expropriated commanding heights of the economy and landed estates. Radical land reforms, health and education for all, breaking the traditional shackles on the advancement of women were initiated. Helen Lackner’s book, Yemen in Crisis, chimes with her recollections, “Life for ordinary citizens was reasonably good, with jobs and incomes that enabled them to achieve an acceptable standard of living, to eat correctly and to finance basic necessities.” Cold War rivalry brought aid from the Soviet Union, helping to build a social infrastructure. Remittances from the more than one million Yemenis working abroad were also crucial in this developmental work.

However, the PDRY imploded in the late 1980s after a shoot-out at the Central Committee, of the Socialist Party between two rival factions belonging to different tribal groups. However, the root cause was the national limitations of a statised economy and lack of people’s democratic control of the economy and state. The capitalists in North Yemen dictated the terms for ‘national unification’. Sana’a was made capital of the new Republic and Ali Abdullah Saleh, the wily Northern despot since 1978 declared himself as president.

Despite this macabre trauma, there are frequent demonstrations to protest against the ongoing aggression and imperialism. The state is in shambles. In Aden and Sana the resilience of ordinary people is revealed in the protests demanding employment and basic human needs. The class struggle is palpable. Even official analysts in the Middle East are nervously predicting a new Arab Spring. Activists have drawn hard lessons from the scattering of the 2011 revolt. Yet for their survival and prosperity, the oppressed masses will enter the arena of history, learning these lessons and fighting to complete the unfinished revolution of 2011. The youth and people of Yemen will not be far behind in this renewed revolutionary upheaval.