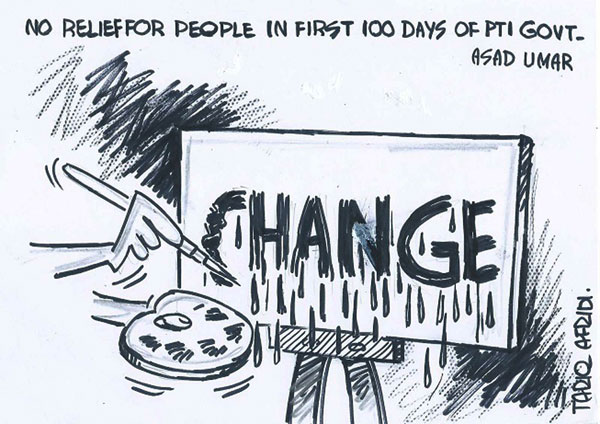 The ‘first hundred days’ mantra of the new PTI government is proving to be a charade. The federal information minister’s assertion that, “The army is fully backing the PTI government…we have accomplished more in 9 days what no government could do in five years.” This statement reeks of condescension and swagger bordering onto insanity. Ending deficits through sale of the official vehicles, the ten billion-tree plantation campaign, privatisation and auctions of state rest houses and major official buildings, the simplicity gimmicks and the utopia of extracting back the plundered wealth, are mere stunts.

The pretentious reluctance of getting the punishing IMF loans and mockery of parliament’s approval is a farcical ploy. The burden of the loans and the economic onslaught on the masses hardly affect the lifestyles of the obscenely rich parliamentarians that enter the elite echelons, spending billions, only to reap exorbitant profits from their political investments.

Behind the scenes, vicious schemes are being prepared to be unleashed for fulfilling the harsh conditionalities of the imperialist institutions that were duplicitously delayed by the previous Sharif government. Now the PTI regime will beseech the IMF to salvage Pakistan’s terminally sick capitalist system and their rulership.

PTI with the highest number of billionaires in the parliament has been a capitalist party from its inception. Now it’s frantically trying to appease the capitalist elite and forces that brought it to power. To plug the huge deficits its only way-out is to squeeze the blood and the tears of toiling classes. The initial drastic measures include 10 per cent increase in toll tax, the rise in ATMs withdrawal tax to Rs. 24, NIC cards fees shot up to Rs. 2400, Fertilizer bag price increased by Rs. 800 and privatisation of health cards etc.

Yet another finance minister from a corporate multinational and an ECC comprising of neoliberal bourgeois economists has been appointed. However, the only thing the ECC can do is to devise more deceptive and convoluted manoeuvres to carry out the vicious cuts inevitable under present-day capitalism. The new austerity programme will be sweetened with cheap rhetoric for the society to swallow.

The first prey of these ‘bold’ economic ‘reforms that were approved by Imran Khan is an unbearable increase in the prices of electricity and gas. According to press reports the government announced last week to increase electricity price by Rs. 2 per unit for the lowest consumers of less than fifty units. This means that for the poorest there will be an electricity increase of more than fifty per cent. This is the first step of the austerity plan to cut the power consumption subsidies at all tiers of consumers.

On Tuesday 04 September, Imran Khan approved an increase of natural gas price by an average of 46 per cent as ‘determined by the Oil and Gas Regulatory Authority (Ogra)’ in June. According to the press report, “The regulator determined up to 186per cent increase in gas rates for poorest categories of domestic and commercial consumers, while the prescribed rates for other categories – industrial, cement, CNG, power and commercial – have been jacked up by just 27 to 31 per cent.” Again the worst affected would be the most deprived sections of the society.

When asked if the prime minister was convinced about the gas price increase when he had been talking about reducing the burden on common people, Ministry’s senior bureaucrat replied, “There is no other way out.” He is spot on. With the capitalist economy crumbling and debt burden along with deficits spiralling beyond control, with the rich and mighty elite enjoying immunity by the state and the system, there is not much choice but to attack the oppressed and the poor. Regimes under capitalism can only strike on the livelihoods of the workers and the oppressed as has been the case in Pakistan’s chequered history.

The problem facing the subsequent regimes since the mid-1990’s has been the piling up of the huge, so-called Circular Debt in the electricity and gas sectors. Few dare to venture into the delicate and dangerous domain of the circular debt and reveal the rates of profits the multilateral corporations and national capitalist firms are plundering. The total amount of the financial transactions of profits transferred abroad by these corporate investors is a closely guarded secret by the state and the political elite.

The bourgeois politicians and the state institutions might ferociously wrangle among themselves publically but they never ever expose the deals and larceny of these imperialist and national bourgeois investors. One of the most infamous corruption cases has been the notorious Swiss bank account of sixty-five million dollars of kickbacks and transactions of perhaps the most sinister and corrupt politician of the land. That money was never retrieved for more than two decades. By now he has managed to secretly stash it into some obscure offshore heaven.

According to a 2015 estimate, the amount of money extracted by these IPP investors had exceeded more than five folds of the total invested capital in the construction of these plants in 1995. Had this massive plunder been saved by the state ownership control of the power production and reinvestment of the surplus into new projects, the amount of electricity that would have been produced by 2015 would have been more than five times than these IPP’s are producing.  In the gas sector, there are similar private sector national and international producers and contractors from whom the SSGPL and SNGPL buy natural gas. The workers of these companies are denied permanent employment and threatened with redundancies. The military expenditures, imperialist debt and interest repayments and foreign investors’ profits will remain untouchable in the “new Pakistan”.

Only a workers’ revolutionary government shall expropriate these fleecing circular debts and the IPPs under a democratic management and control of the workers, who actually build and produce electricity through their hard labour. Such a historic feat can only be accomplished with a revolutionary socioeconomic transformation of society and the economy—a system where production and distribution systems function not for the motive of profit but for the incentive and a mission of fulfilling human deprivation need.