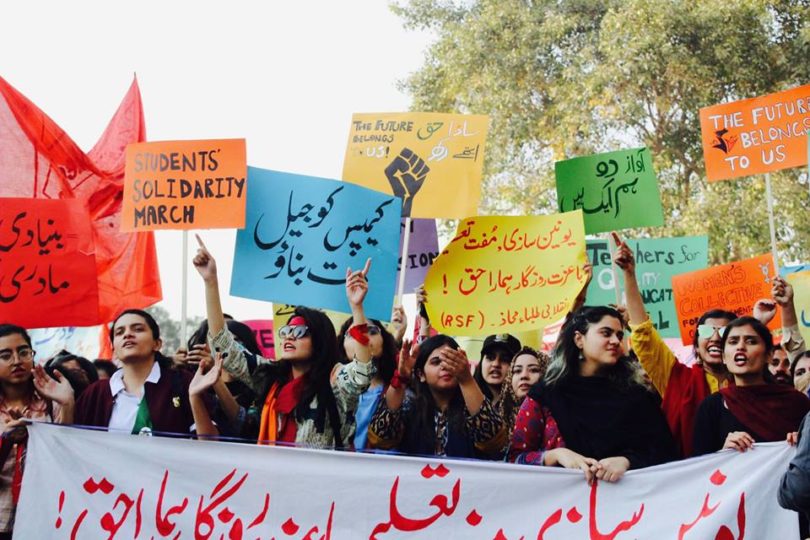 On November 2 and 3, 2019, in a meeting hosted by the Progressive Students’ Collective, more than twenty students’ organisations from all across the country, including Gilgit-Baltistan and Jammu Kashmir formed the “Students’ Action Committee” to demand the revival of student unions and other issues in higher education.

The committee vowed to launch a nationwide struggle for the revival of student unions, against the cut in the educational budget, increasing harassment cases in universities, security forces interferences in educational institutions, student torture cases, lack of educational infrastructure and ban on freedom of expression. It also decided that the first public activity under the banner of Students’ Action Committee would be the “Students’ Solidarity March” on November 29, 2019.

The current crisis of higher education in Pakistan confronts students in the form of rising cost of education and a drastic decrease in immediate returns from a college degree. Not only is it harder to afford college education, but education expenses also leave students and their families in more debt and with limited job opportunities. A shrinking job market with employment opportunities swayed through social capital in the form of “contacts” has no space for a majority of graduates.

It seems like a four-year degree only qualifies one to become a daily-wage labourer. Given this continual crisis, students are organising on campuses across the country for the forthcoming Students’ Solidarity March, after so many decades their struggles for the restoration of students’ union are not fragmented but coordinated.

Since the collapse of the students’ movement of the 70s and the subsequent ban on student union in 1984 under the dictatorship of General Zia ul Haq, most campus activism has taken the form of single-issue groups. There is a ban on any kind of political activity by students on campus and those who have tried to raise their voice for rights, have been rusticated, abducted and sometimes killed by fascist groups. By using anti-terror laws, their voices have been suppressed.

Due to different kinds of repression on campuses, students haven’t been able to form an alliance that can give voice to all those being robbed of their rights and facing severe repression.

From the past one year, students are agitating in different campuses on different issues, which include protests and sit-ins against fee hikes, sexual harassment, against the abduction of a number of students and for better housing, internet and transport facilities on campuses.

While the resistance that popped up at Quaid-e-Azam University (QAU) against budget cuts and tuition hikes remained partially successful in pressurising the administration to succumb to some of their demands, the fiscal situation and budget cuts at QAU are not unique.

Provincial governments across the country are cutting funding to schools and universities; the university officials are using budget cuts to jack up tuition fees (hikes that will continue for a long time) and to cut essential services and programs. While the students at QAU, Punjab University (PU), Sindh University (SU) Peshawar University and the University of Balochistan (UoB) are putting up an amazing response to fee hikes, sexual harassment and securitisation of campuses, a coordinated effort under the banner of Students’ Action Committee to revive student unions would be more beneficial for the student body to assert its power as a class that represents the youth of this country.

Therefore, we are marching on November 29 to organise and to seek institutional power in universities and create a way of holding onto that power.

It’s our education — we should control it.

Movements grow not only by example, but when they actively engage people and share resources and hard-earned lessons. Because the federal government still makes most of the higher education policy decisions, students also need to coordinate on the national level in ways that foster cross-campus solidarity and encourage local initiatives.

We are also aware of the fact that coordinating efforts should never mean that local campus organising becomes merely an extension of some larger campaign because this sort of strategy cannot support long haul organising. We need coordination that is mutually beneficial to everyone involved.

We are marching on November 29 because if we want to create radical change on our campuses — change that addresses economic and cultural aspects of our life — we need to move towards students’ unionism. Unions that are run by the rank and file students; that fight alongside faculty and workers; that seek to empower the historically oppressed and revolutionise our educational system.

We are marching on November 29 to organise and to seek institutional power in universities and create a way of holding onto that power. It’s our education — we should control it.